Where is the Money Now? 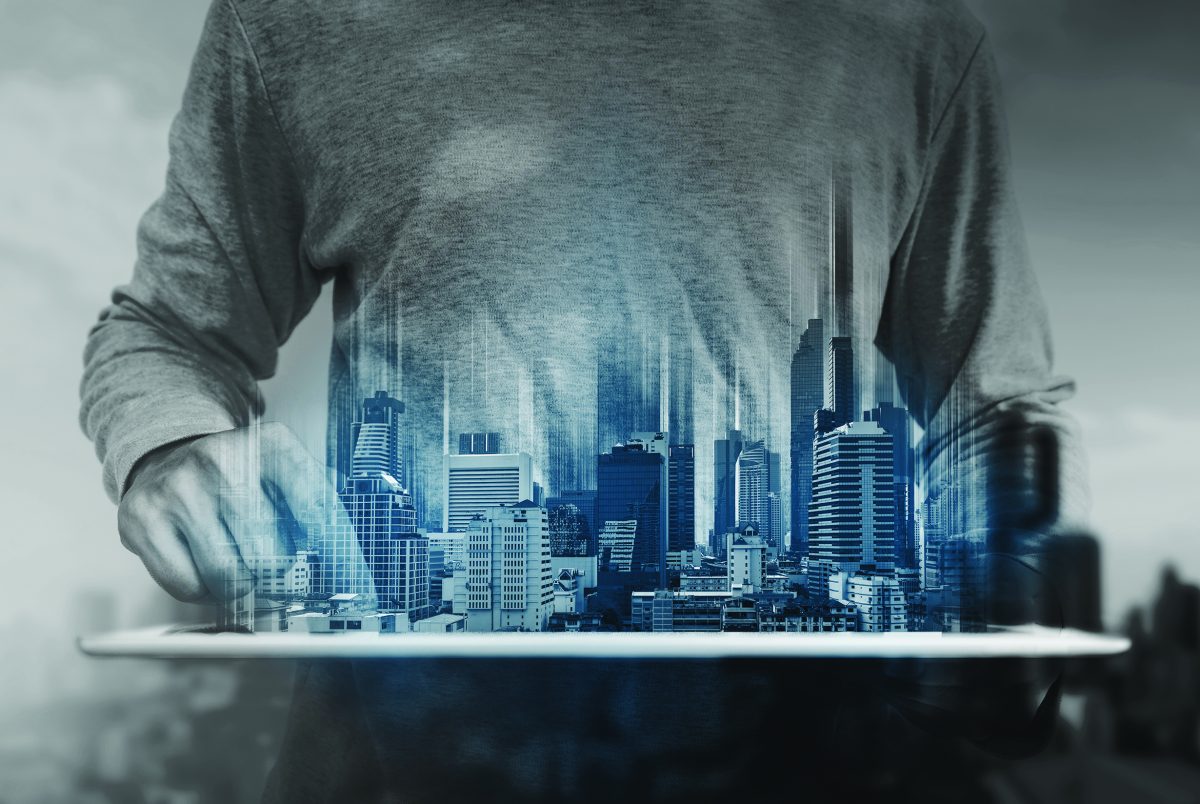 Economist Robert J. Gordon’s remarkable book The Rise and Fall of American Growth (2016) concludes by detailing how the third industrial or digital revolution has failed to come close to matching the productivity growth rates achieved between 1930 and 1970, despite a moderate uptick between 1995 and 2004 generated by the introduction of the Internet. This has not curtailed the omnipresent use of “disruptive” and “transformative” as adverbs to describe how digital technology impacts just about every component of the economy. Starting four years ago and continuing, these adverbs frequently came into play to describe Fintech and its impact on the $7-trillion global commercial real estate (CRE) market. A prime disrupter of CRE, goes one argument, is the so-called “democratization” of investment created by lower cost, online crowdfunding platforms backed by new exempt market regulations.  By 2019, are these portals proving to be disruptive and transformative or just a wobbly niche?

Fintech and CRE: An Age of Disruption and Transformation or not?

Fintech is a broad term primarily applied to any new, digitally-based technology intended to improve the efficiency and ease of the application of a wide range of financial services. As Amar Nijjar, founder of Toronto-based R2 Capital and Investments explains, Fintech can be divided into two discrete forms. First, it simply means the application of digital technology to financial sector transactions such as investment flows, money management and disbursements. But second, it “deals with the capital formation process connecting private capital and equity sources with property owners and developers who need capital to do their projects.”  The latter’s most disruptive impact is touted to be the implementation of online crowdfunding platforms that open up CRE investment to a much broader range of retail investors while reducing cost to both investors and developers/borrowers.

Although Deloitte’s 2018 Commercial Real Estate Outlook reported that between 2008 and 2017, investment into the creation of real estate tech start-ups soared, by mid-2018, CFX Markets reported total crowdfunded real estate investment accounted for only $2.5 billion of the $7 trillion worldwide CRE market. Optimists see this as signalling significant potential to grow. Similarly there appears to be consensus that all crowdfunding will reach $300 billion by 2025, but if real estate sustains its current 6.2 per cent of these funds raised, its overall contribution will remain marginal.

Real estate was at the heart of the great collapse of 2008. In reaction, regulatory reform to protect investors only strengthened the near exclusion of individual “retail” investors from the lucrative CRE market. At the same time, accredited Investors (defined in table below) who lacked the right connections also found it difficult to crack the market. The conditions were ripe for the birth of crowdfunding. In 2010, Washington D.C.-based Fintech start-up Fundrise’s work with the Securities and Exchange Commission (SEC) to create an online portal for accredited investors to fund a local project kick-started a “democratization” of investment. Obama’s subsequent 2012 Jumpstart Our Business Startups Act (JOBS Act) allowed start-up platforms and even small businesses to openly market private investments to accredited investors. While the potential percentage of Americans who qualify as such investors is relatively small (less than nine per cent), in this age of income inequality they still control 70 per cent of all wealth.

For the remaining 91 per cent of the population, the addition of Title III in 2015 meant private investment was opened up to non-accredited investors, albeit restricted to very modest investment limits with limited raises over a prescribed period. While crowdfunding initially focused on the “fix and flip” market, CRE projects soon gained traction. Constrained by Title III’s severe limits on non-accredited investors’ contributions and $1-million raise limits, the Act’s Title IV Regulation A+ (also approved in 2015) gained prominence as it permitted raises of $50 million per year open to retail investors. This has been increasingly exploited by offering eREITs through online platforms. Fundrise would establish the first eREIT and moved solely to an eREIT model in 2016. As pooled funds, however, this model takes away the investor’s flexibility to invest in community-specific projects; an attribute Nijjar believes is a key social objective, especially for secondary communities.

Canada quickly followed suit. It has to be remembered, however, that “the biggest challenge is we have 13 different provincial/territorial regulators who behave as if each is a different country and they don’t have harmonization,” says Nijjar. While in general this is true, there has been enough harmonization to permit Ontario’s regulatory evolution since 2012 to act as a model. By 2016, following an Ontario Security Commission (OSC) review “to consider whether there was potential to facilitate greater access to capital through the exempt market, particularly for start-ups and small or medium-sized enterprises while maintaining an appropriate level of investor protection” the OSC issued four new capital raising prospectus exemptions.

First, in February 2015 came the security holder prospectus exemption followed by the friends and business associates exemption (May 2015). Third, the offering memorandum exemption was approved in January 2016, and fourth, the crowdfunding exemption also arrived in January 2016. These exemptions are not restricted to online platforms and can even be used by a developer to raise capital directly. Within these exclusions, the OSC outlines seven types of prospectus exemptions (although for our purposes the accredited investor, crowdfunding and offering memorandum exemptions are the focus for the online platforms and are summarized here).

Online platforms may register as either a full Investment Dealer or, as is frequently the case, an Exempt Market Dealer regulated under the Investment Industry Regulatory Organization of Canada (IIROC). The latter is restricted to exempt securities not requiring a prospectus. A mortgage administration licence is required if syndicated mortgages are used as the investment instrument and is regulated by the Financial Services Commission of Ontario (FSCO). 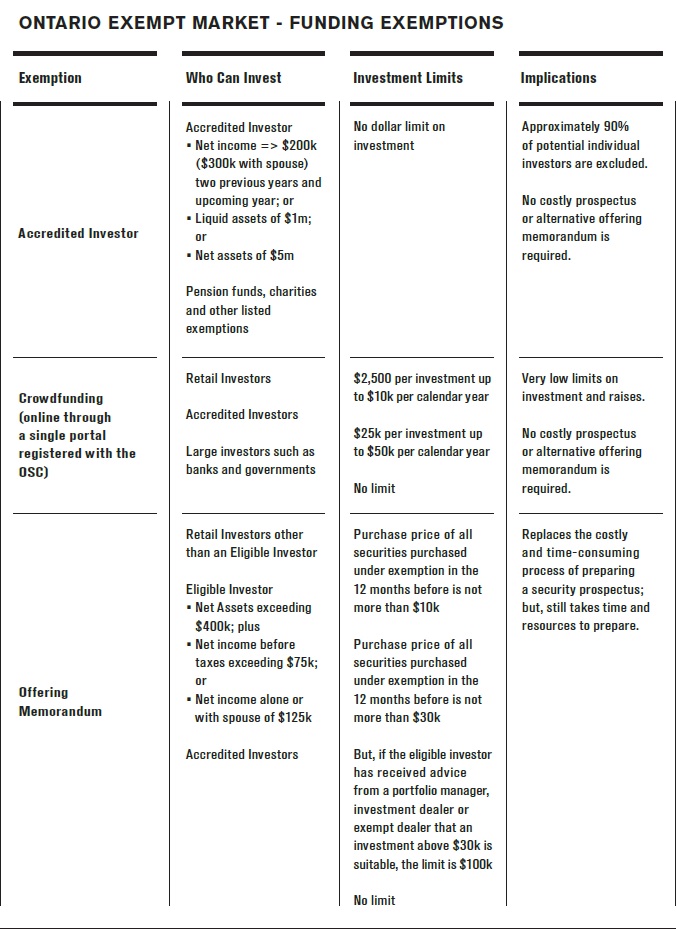 Philip Aubry, an associate at the Dickinson Wright LLP Toronto office who assists firms prepare for exempt raises and is not aware of any eREITS operating in Canada, confirms the common investment instruments used include limited partnerships (units) and syndicated mortgages, frequently under the offering memorandum (OM) exemption. Preferred shares are also an option. Given the significant financial disclosures and reporting requirements of an OM, however, he adds “if you can avoid using the OM exemption, you definitely do and we always gravitate toward the accredited investor exemption.” Garret MacGillvray, now a senior associate with Trez Capital but with significant experience with an online platform, agrees. “There are three levels of audited financial statements that you can get for an audit and this is the most expensive.” Nijjar’s R2 Capital, until recently, primarily used the accredited investor exemption and bluntly states the syndicated mortgage approach “is broken.”

While in 2018 both American and Canadian articles continued to suggest the disruptive potential of online CRE platforms, caveats were common. A November 2018 ValuStrat report titled How Will FinTech Impact the Commercial Real Estate Market suggests online platforms are “trying to radically transform traditional commercial real estate lending processes, [but] they are still finding that they have plenty of work ahead.” In a 2018 interview for ITBusiness.ca, NexusCrowd’s CEO Hitesh Rathod admitted growth has been slower than expected.

Determining the dollar impact of CRE crowdfunding investment in both the U.S. and Canada has proven elusive. While it is possible to get data on the larger individual U.S. platforms, sometimes indicating total raises in the hundreds of millions, the cumulative incursion into total CRE investment is probably relatively insignificant. In Canada, a 2018 OSC report on the exempt market found that in all industrial sectors individual investors contributed $2.2 billion or only two per cent of total investment even though they constituted a whopping 77 per cent of all investors. Only 10 per cent of their investments went into real estate and mortgages. Approximately 80 per cent of this investment was raised under the accredited investor exemption and there were no reported crowdfunding exemptions used in 2017. Nijjar’s assessment of its current impact on CRE investment is, in one word, “lacklustre.”

Equally difficult is getting a handle on the number of operating platforms. Through the National Crowdfunding Association’s listing and internet searches, 12 can be identified in Canada, although a majority offer securities in a mixed range of industrial sectors and most catered only to accredited investors. Interestingly, R2 Capital has just gone through a major pivot towards becoming a data firm generating wealth maps of interested investors that can be monetarized through the platform. “Going forward, R2 is not about selling investments,” says Nijjar.

Despite the growth of disruptive technology, there appear to be few dedicated online platforms for CRE. In the U.S., for example, there are approximately 100 real estate crowdfunding platforms but as a capital source for the CRE sectors these remain marginal. Plus, there are also signs these platforms are not yet a proven business model. “Five or more years after many companies in this space got their first funding, it isn’t clear any of them have figured out how to make money,” wrote Jan Brzeski of California-based Arixa Capital. Already by the end of 2017, Ian Ippolito’s Real Estate Crowdfunding Review reported only five platforms were “thriving,” while the vast majority faced moderate or substantial issues and “a stunning one-third of the former 25 [top] platforms are out of the accredited investor platform business today.” The Review’s 2019 platform ratings for accredited investor portals were not encouraging: in the six tiers descending from Best-of-the-Best Tier to Bottom Tier, no platform made Tier 1 and only six made Tier 2; 17 made only Tier 5 and included those that had exited/shutdown or faced significant challenges; 80 met no assessment criteria and populated the Bottom Tier. In its 2019 report on platforms for non-accredited investors, the Review found only 15, many of which appear to primarily offer eREITS.

We started with the question of whether or not online CRE investment platforms were transformative or a niche market with a wobble. It is tempting to lean to the latter. However, some trends recently identified by Sam Dogen in his Financial Samurai blog may increase the penetration of these platforms. First, accredited investors may become less a target in favour of institutions allowing for much bigger raises. Indeed, Investment Property Forum had already identified back in 2016 the “crowding out” of smaller investors by institutional investors.  But don’t expect major traditional institutions to acquire or create their own investment platforms, says MacGillvray, a trend not even found in either the more mature U.S. or U.K. markets. Second, eREITs, although currently absent in Canada, may increase providing relatively safe investments for retail investors. Finally, mergers and acquisitions, he believes, will result in only three top tier companies in the U.S. by the end of 2019.

Commentators also predict “traditional” crowdfunding will itself be disrupted by the need to leverage blockchain-based tokenization that will improve liquidity, diversification and distribution of risk.  Thomas Park, CEO and co-founder of Vancouver-based Reitium Blockchain Technologies agrees: already it boasts $830 million in committed assets (90 per cent in the U.S. but some in Canada) and almost two thousand investors on a waitlist while the company completes its exempt dealer applications. Once up and fully running, an investor can establish a digital wallet, use a Tinder-like swipe on their smartphone to select properties and click to buy. Tokenization allows an investor to purchase in fractions and because a secondary market will be created, investors will have more liquidity (although resale requires an accredited investor).

It is probable CRE crowdfunding will remain a growing capital market niche. The key focus will have to be getting out of the wobble, possibly further regulatory changes and, in the end, finding profitability.

Zero Carbon Buildings are not only good for the planet, but a good financial investment too: CaGBC

Stressed out working from home? Consider a hotel day pass