Pick a street corner in downtown Toronto and look around. Then look up. Odds are, you will see evidence of the city’s rapid transformation almost wherever you look. According to Rider Levett Bucknall’s 2018 Crane Index, Toronto leads North America in per capita construction cranes, with residential development accounting for the lion’s share of new development. As a seemingly ceaseless condo boom nears its third decade, construction is ever-present in Canada’s largest city. Yet, past the unmissable influx of intensification, a more subtle phenomenon quietly hollows out much of the city.

While new residents are flocking downtown, population is stagnant or declining across most of the city. In 2017, urban planners Cheryll Case and Tetyana Bailey published a study filtering overall census population statistics through the Toronto’s zoning boundaries. As towers filled the skyline, overall population grew by 7.6 per cent between 2001 and 2016. But over the same period, Case and Bailey found that some neighbourhoods declined in population, while many more remained stagnant.

Speaking to The Globe and Mail, Canadian Centre for Economic Analysis CEO Paul Smetanin framed the issue with sobering clarity. “Since 2001, about 52 per cent of the land mass of Toronto has reduced in density of population by about 201,000 people.” Although that population loss is offset by huge gains in other parts of Toronto — which added over 500,000 residents since the turn of the millennium — the numbers make for strange reading in a city facing record-high housing costs, skyrocketing rents and historically low vacancy rates.

Zoning and the Yellowbelt

According to Case, the population decline has several root causes. “Demographics have changed since most of Toronto’s residential neighbourhoods were built,” she tells me. “Much of our single-family housing stock was built when families had three or four kids, but that’s no longer common.” As overall population continues to grow, the inherent scarcity of centrally located urban land also means single-family homes become more expensive in the long run. 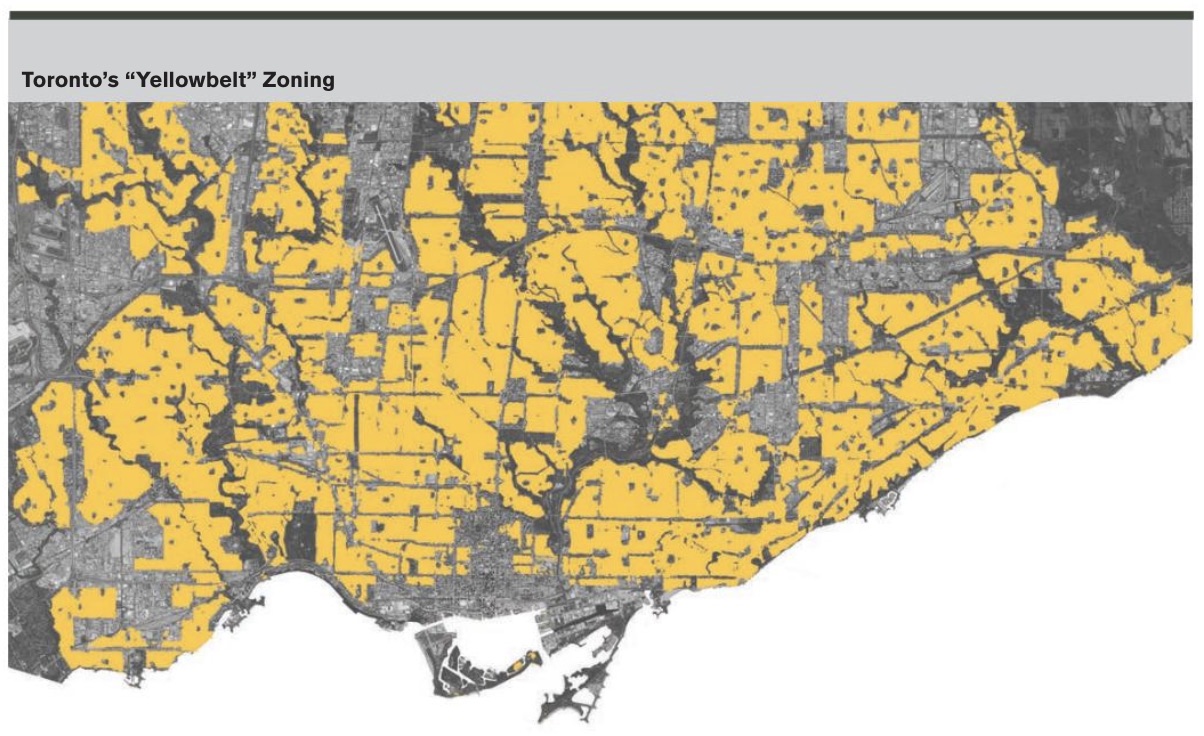 Per the Official Plan (OP), the “stable residential neighbourhoods” currently losing population are explicitly insulated from growth and development. The low-rise residential zones that make up most of the city’s land area are zoned to remain as they are. New single-family homes can replace existing ones, but other building forms are not permitted. It’s one of the reasons we build so many high-rise towers elsewhere, with a city’s worth of demand channelled into the relatively small strips earmarked for intensification.

Coined by urban planner Gil Meslin, the term ‘yellowbelt’ takes its name from Toronto’s large “residential detached” zone, defined in the zoning by-law as areas that permit only detached residential housing. And despite policy tweaks over the last decade (including the decision to allow laneway suites), some residential areas remain nearly impossible to intensify. In fact, even adding more of the modestly scaled buildings that have dotted Toronto’s older residential neighbourhoods since the early 20th century is restricted. Predating modern zoning, many of these buildings constitute the human-scaled ‘missing middle’ of development that provides a transitional ground between towers and detached homes. Today, they could not be built.

Toronto isn’t alone in restricting new development in residential areas. Across North America, similar swaths of single-family homes surround central pockets of density. In 2018, 78 per cent of Los Angeles, 42 per cent of Portland, and 57 per cent of Seattle remains blanketed in yellowbelts by another name, and gripped by similar housing affordability problems.

In Generation Priced Out: Who Gets to Live in the New Urban America, housing activist Randy Shaw argues that many of North America’s most progressive large cities chronically fail to provide adequate new housing supply. Together with San Francisco, liberal bastions like Portland and Denver are also places where new development is most viciously contested. According to Shaw, these communities are “trapped in the framework of past urban renewal fights,” which pitted low-income urban residents against cruel top-down planning policies.

These past conflicts are neatly epitomized through the now-legendary conflicts between Robert Moses and Jane Jacobs. Spearheading New York City’s mid-century urban development, Moses’s policies created elevated expressways at the expense of working class inner-city neighbourhoods, hastily bulldozed in favour of suburban America. In opposition to Moses, Jane Jacobs rallied local residents to oppose the Lower Manhattan Expressway, which would have torn through neighbourhoods like SoHo and Little Italy in the name of “slum clearance.”

Moving to Toronto in 1968, Jacobs helped guide the city through similar conflicts that defined the 1970s ‘reform council’ era. The city pushed to demolish large swathes of the inner city, including much of The Annex and Chinatown, to build the Spadina Expressway. Luckily, the expressway was halted. So too was a plan to demolish Queen Street’s Trefann Court, protecting a low-income community from forced evictions. The preservation of Trefann Court marked a turning point in Toronto’s approach to urban planning, giving rise to a more robust community consultation process that puts local residents at the heart of urban decision-making.

Viewed through this lens, contemporary opposition to zoning reform continues a long progressive history of urban preservation: a perspective as myopic as it is far-sighted. No longer hubs of immigration and incubators of vibrant ethnic communities, Toronto’s ‘stable’ inner-city neighbourhoods are now full of multi-million dollar homes. Immigrants and low-income Torontonians are increasingly clustered far from the Victorian townhouses once threatened by the Spadina Expressway. The same ethos of community-led planning that once protected the vulnerable from displacement now arguably entrenches the privilege of the few.

According to the University of Toronto’s David Hulchanski, the city is continually becoming more divided by income, race, and geography. In his seminal 2010 Three Cities report, Hulchanski identified a shrinking middle class surrounding central Toronto’s increasingly prosperous urban core, with a ring of low-income suburban communities stranding the city’s northeastern and northwestern boundaries. In the years since, the trend has intensified, with urban wealth becoming more consolidated as the rest of the city faces declining socio-economic mobility.

Considering these factors, the city’s definition of stable neighbourhoods appears dangerously superficial. While residential streets remain verdant and romantic as ever, the declining population, lack of affordability and eroding diversity tell a different story. A holistic definition of ‘stability’ must privilege inclusion, affordability, and quality of life over built form alone.

So why hasn’t zoning policy been amended? The Globe and Mail’s Alex Bozikovic offers simple and convincing answers: “Because that’s politically toxic. Affluent homeowners hate it.” Writing just ahead of Toronto’s recent municipal elections, Bozikovic celebrated the yellowbelt zoning reform advocated by progressive mayoral candidate Sarah Climenhaga, who argued that “the city is creating gated communities, closed off to low-income people.” Climenhaga was one of few candidates to do so, cognizant that her proposal was unlikely to be politically popular “with the small group of people who vote in this city.” But what about everyone else?

Cheryll Case wondered the same thing. Recently, she organized Housing in Focus, a series of six workshops that brought together some 140 participants from low-income communities across Toronto. There were stories of trying to make rent, getting priced out of neighbourhoods, cycling though transient housing, and struggling (and sometimes failing) to find an affordable place to live. In a city facing a housing crisis of unprecedented severity, most of the meeting’s participants settled on the same solution: build more housing.

“A desire to see more mid-rise, affordable housing in residential neighbourhoods was quite consistent across all of the meetings,” Case says. The Torontonians who made their voices heard at Housing in Focus are not the sort of residents covered in the media complaining about the ‘impacts’ of a four-storey condo in Rosedale, or a daycare in Cabbagetown. Many are economically vulnerable, with essential human priorities — like having a decent place to live — that make complaints about excessive density seem trivial by comparison.

The same ethos of community-led planning that once protected the vulnerable from displacement now arguably entrenches the privilege of the few.

But if new homes were allowed to be built, would they be affordable? Assuming that significant intensification happened through massive — and massively unprecedented — public investment in affordable housing, new housing supply could be priced to accommodate economically vulnerable residents. That isn’t likely to happen.

Barring the introduction of public initiatives that exponentially scale up the scope of the National Housing Strategy, the majority of any new supply will continue to be delivered by private-sector developers. Will the increased supply translate to greater affordability? In Why Can’t You Afford A Home?, British researcher Josh Ryan-Collins argues that the urban housing crises across the western world should be understood primarily as products of a global banking system where rapidly scaled-up mortgage lending drives up the price of the land that it borrows against.

Financial systems in which home equity becomes a primary driver of personal wealth creation — and retirement savings — also bode poorly for long-term affordability. Relying on housing as an investment means relying on it to always become more expensive. “We say we want housing to be cheap and we want home ownership to be a great financial investment,” Daniel Hertz explains in City Observatory. But unless “we realize that these two objectives are mutually exclusive, we’ll continue to be frustrated by failed and oftentimes counterproductive housing policies.”

Where does that leave the yellowbelt? Banking and investment reform may be necessary to meaningfully address the housing crisis, but supply also plays a key role in alleviating pricing pressures. If 300,000 new apartments appeared in Toronto overnight, the competition to rent a unit would surely ease, as would the bidding wars now facing prospective renters.

Housing affordability has many determinants, and any long-term solution must address both supply and demand pressures. Zoning reform alone is no panacea to Toronto’s urban crisis. But in a city at the heart of North America’s fastest-growing urban region, it is surely necessary.

If the politics, history, and market impacts of zoning reform are painfully complex, the environmental and demographic importance of zoning reform is devastatingly simple. Facing the undeniable reality of climate change, urban density is needed to reduce emissions. And if we are committed to a green and inclusive society that provides opportunities for immigrants and lower-income Canadians, we must also end the geographic discrimination perpetuated by single-family zoning.

“The single biggest factor in the carbon footprint of our cities isn’t the amount of insulation in our walls, it’s the zoning,” notes Llyod Alter in TreeHugger.com. Dense urban living, especially the ‘gentle density’ that can re-shape single-family neighbourhoods, is vastly more efficient — and less environmentally destructive — than sprawl. Despite rapid high-rise construction, the city’s overall population density remains low, leaving lots of room for intensification. And yet, low-density suburban growth in the 905 continues to outpace Toronto’s population gains, making the need to unlock development in the urban core all the more urgent.

These solutions may sound like a radical re-scripting of Canadian life, but ours is already a profoundly urban nation. “The dwelling that’s most Canadian, in its sheer numbers and popularity, is the slab farm – the block of high-rise rental apartment buildings, generally constructed between 1955 and 1979,” Doug Saunders writes in The Globe and Mail. In 2018, the realities of apartment living can no longer remain culturally invisible.

As Toronto and other major Canadian cities debate single-family zoning, we must remember that in doing so we are also debating the fundamental issues of livability, inclusion and environmental justice. What must emerge is a new paradigm for understanding our cities, and ourselves.