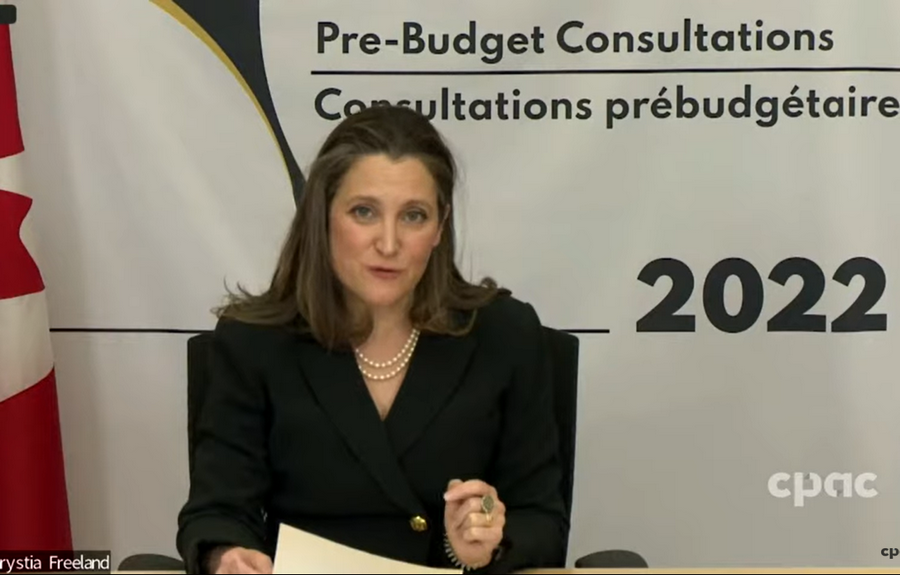 OTTAWA – Canada’s finance minister laid out the broad strokes of this year’s federal budget, saying she wants to boost the country’s economic potential while minding inflation rates not seen in 30 years.

Chrystia Freeland also said the budget would address housing affordability concerns, indicating the document could include a slew of measures to crack down on housing investors that were outlined in her marching orders from the prime minister.

During a late afternoon news conference where she launched pre-budget consultations that run until late February, Freeland focused her comments on the need for the budget to make the country more competitive and innovative.

She also noted a need for the budget to help fund the transition to a green economy, whose costs could be steep, and move beyond the recent focus on reducing greenhouse gas emissions.

“When I look at what I want to have in the budget, I want to have measures that increase the ability of Canada to grow really, really strongly post-COVID,” Freeland said.

Freeland said a growing economy would help keep federal finances on solid footing after an expensive two years when the treasury has pumped out unprecedented aid to combat the economic fallout from COVID-19.

The Finance Department is projecting the deficit this year to hit $144.5 billion, one year after a shortfall of $327.7 billion. The deficit for the next fiscal year, starting in April, is projected to hit $58.4 billion, not including any new spending promises in the budget.

Speaking to the House of Commons finance committee earlier Monday, parliamentary budget officer Yves Giroux said he expected deficits to be the norm for the coming years.

That’s not necessarily a problem, he said, so long as the deficits are “relatively small” and the economy grows, bringing in more in federal revenues to pay for the increased costs.

The risk with larger federal deficits comes down to where the government spends its money, Giroux said. If the spending doesn’t create extra productive capacity in the economy and instead stimulates demand, “it can lead to inflationary pressures,” he said.

The Bank of Canada said last week the economy appears to have hit its productive capacity, leading to a scenario where too much government stimulus could boost consumer spending and add to inflation strains.

Freeland said the government would be mindful of higher inflation rates as she crafted her spending plan.