Toronto has inadvertently accomplished a striking architectural feat. It has built a new skyline. When viewed from the Western Beaches, the recently completed Humber Bay Shores community now has a recognizable contour that flows seamlessly into previously existing structures at either margin. With the completion of several towers at the west end of this waterfront enclave, two decades of development have serendipitously resulted in a largely coherent vista. Contemporary architecture at the building level has fused into a contemporary whole. 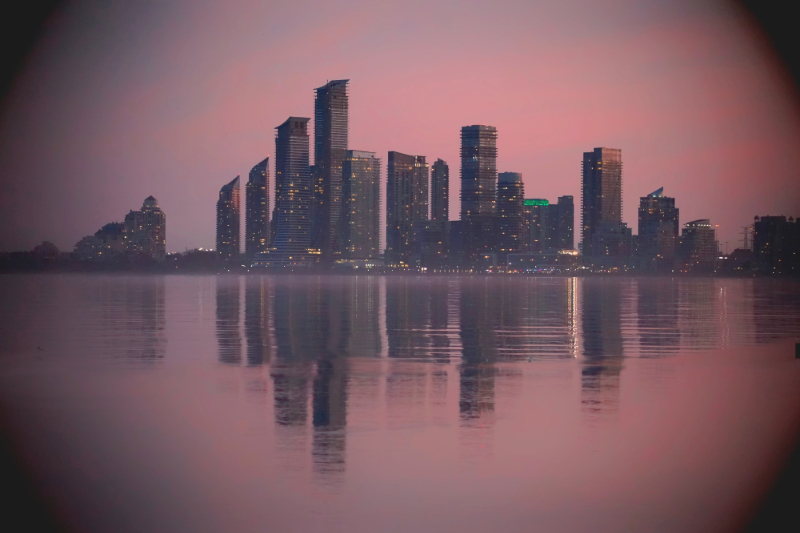 The skyline could not have been executed any better if it had been planned with visionary intent. It rises and falls as harmoniously as a sine wave, but it is also graced with the happy coincidence of the sunset squarely at its back and a clear reflection in the normally calm waters of Humber Bay in the foreground. The community started with a complete expropriation of derelict motels that sat on several large and otherwise empty lots along the water’s edge. That action may not have seemed to garner much of a prize at the time. After all, the site was trapped in a narrow strip between the Gardiner Expressway and the shoreline of Lake Ontario’s Humber Bay. It also shared that strip with a decade’s old cookie baking plant.

A big push came from a 2006 OMB decision to allow far more residential construction than the city had envisioned at the time. This is truly an enclave, and it was obvious that high density would bring congestion or even outright conflict. Only two roads served the area from the west, and one road fed out in the east. Public transit was virtually non-existent.

For the 14,000 or more residents who would end up here by 2020, transit coverage remains thin, which reinforces the sense of isolation from virtually every amenity the City of Toronto offers, aside from the narrow strip of parkland along the water’s edge. This sore lack of connectivity may change with the coming infrastructure expansion on the northern boundary, but it will likely be untold years before a new GO train station and road links materialize. On one hand, density goes with the desired trend to avoid sprawl, but it also jars the senses to realize that it sits immediately adjacent to a few delicate ecological installations, such as a new butterfly habitat on the quiet bay shore.

The historical beginning of the Humber Bay skyline was certainly the 1978 Palace Pier tower on the west bank of the Humber River. A second tower soon followed on the nine-acre plot, which, at its widest point provided a generous setback nearly equal to the building’s 46 floor height. This towering pair might have been an isolated sentinel for some years, but now, combined with the pedestrian bridge spanning the river, it stands as a punctuation mark at the skyline’s far eastern limit.

As Canada’s economy continues its historic shift away from industry, Toronto’s west end follows along. The Mr. Christie’s cookie factory that had previously hemmed in the Humber Bay Shores community along its north edge was demolished in 2018. The plant’s original water tower will stand as the sole industrial relic as the city plan for this last remaining parcel calls for more mixed use, predominantly with residential, retail, and recreational facilities to serve Toronto’s ongoing inbound migration.

Any view of the lake from this final 28-acre building site has already been blocked by the newly erected residential towers, so its completion will have no effect on the skyline. And because municipal policies around the entire Golden Horseshoe largely restrict new waterfront development to public access recreational parkland, this might end up being the last skyline to rise for the foreseeable future.

Joe Atikian is a Toronto author and photographer creating works that involve industry, nature, and art. His latest book is Industrial Shift : The Structure of the New World Economy, and his photographs are available at www.joeatikian.com