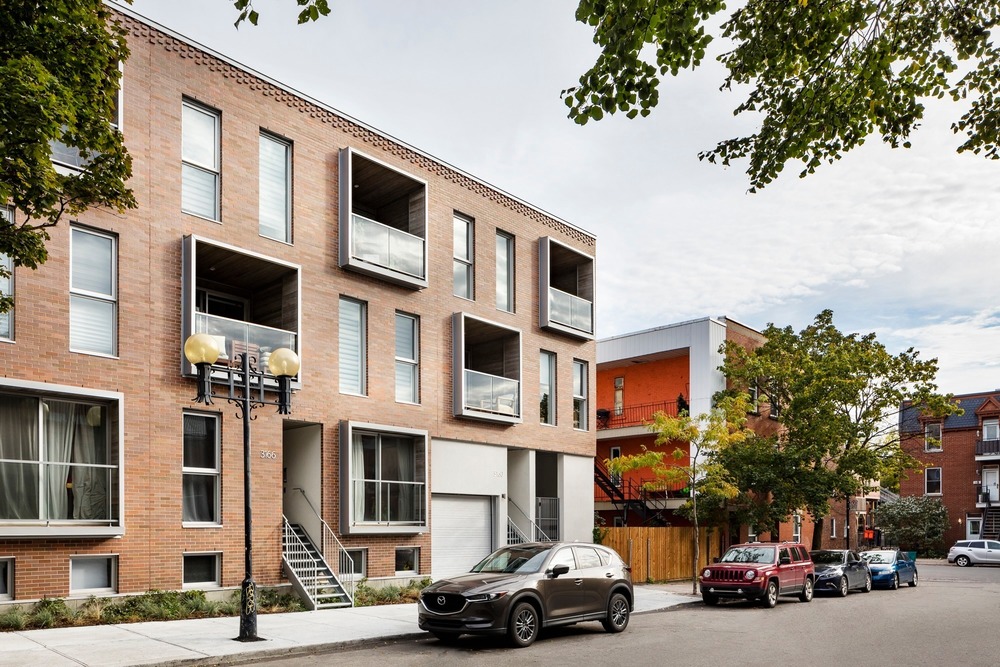 Recently completed, Le Jardinier (“The Gardener”) has already made a name for itself by being awarded the 2018 INOVA Award by the Urban development institute of Quebec (IDU) in the Multi-residential projects of $ 50 million and less category. Composed of 16 units and designed by ADHOC architects’ team in collaboration with the developer Knightsbridge on Rouville Street in the Hochelaga-Maisonneuve borough, the project’s intent was to develop affordable housing for a diverse clientele, ranging from families to young professionals, while offering living spaces and delivering construction of high quality, thus respecting the neighbourhood and its context.

Guided by the prevailing concept of openness, the building was designed with double aspect apartments. This was a key element of the project, allowing all users to have a view of the inner courtyard and to the front of the building and ensuring residents can enjoy natural daylight throughout the day. Each unit benefits from generous fenestration at both ends, with a loggia on one side or the other. This play and shift in plan results in a pleasant dynamism on the courtside and street facades. The loggias ensure privacy and soundproofing between the units, and act as cocoons that are both intimate and aerated. This benefitted the construction quality of the interiors, which was a high priority for both the developer and the architect. Each unit of the top floor includes a mezzanine with a terrace and offers breathtaking views of the city’s horizon and the Jacques Cartier Bridge. 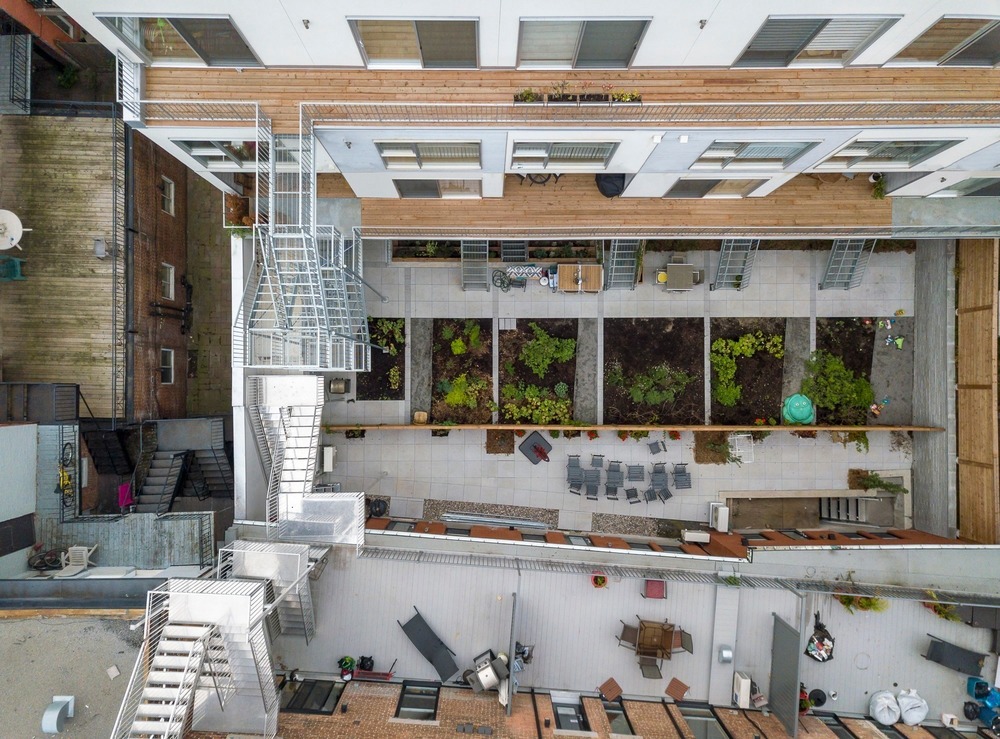 Another architectural challenge of the project was resolving the relationship with the neighbouring building on Sainte-Catherine Street as its occupants needed to evacuate through the project’s lot. A passage in the form of a carriage entrance was developed as the most interesting solution. This element subsequently influenced the remainder of project, from the overall structural organization of the building to its envelope. The right area of the ground floor, including the garage, the carriage entrance and the bicycle parking, is treated as a subtraction to the building. This section contrasts from the rest of the brick finish through a different materiality allowing it to break deliberately from the remainder of the project volume. It minimizes the building’s monolithic appearance by bringing a touch of lightness.

The main façade on Rouville Street remains sober and perfectly integrated with its urban and historical context, notwithstanding these touches of modernity. The color of the brick and overall size of the building is reminiscent of the neighbourhood’s characteristics. The checkerboard pattern, very present in heritage buildings of Sainte-Catherine Street, is integrated at different scales, from the cornice’s brick play to the alternation of the loggias and the various siding materials on the courtyard facade. The light metal structure stairs providing access to the units allude to Montreal’s typical exterior feature. 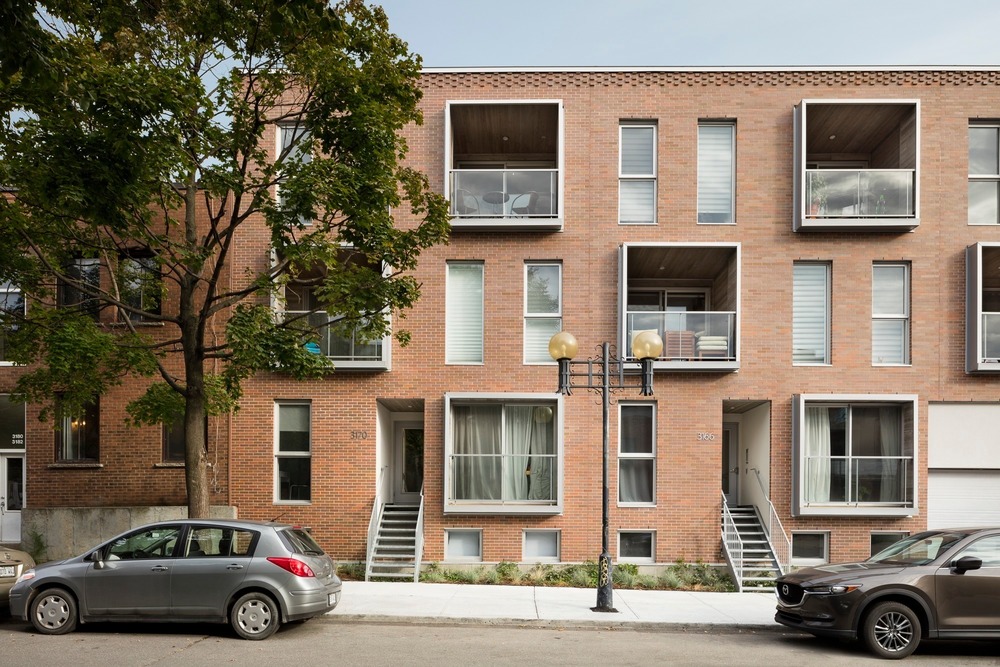 To meet the project’s intentions of providing a haven of peace for its inhabitants while responding to the needs of a society increasingly close to its environment, emphasis was made on green spaces and greenery in Le Jardinier.  As gardening is one of Quebecers’ main hobbies, garden beds for vegetables and vegetation were integrated in the courtyard, a rarity in the Hochelaga borough and Montreal in general. Greenery was also incorporated into the upper terraces through raised garden boxes that double function as guard rails. Thus all residents can enjoy and have access to green spaces. Following sustainable guidelines, the project encourages active and alternative means of transportation, by including bicycle parking and storage in the carriage entrance and a Communauto (carsharing service) car garage, accessible to all residents.

Having recently been awarded its LEED Platinum certification, with only 40 other buildings in Montreal having attained this level, Le Jardinier aspires to a more humane movement, conducive to meetings and sharing and beneficial to the environment and its context. 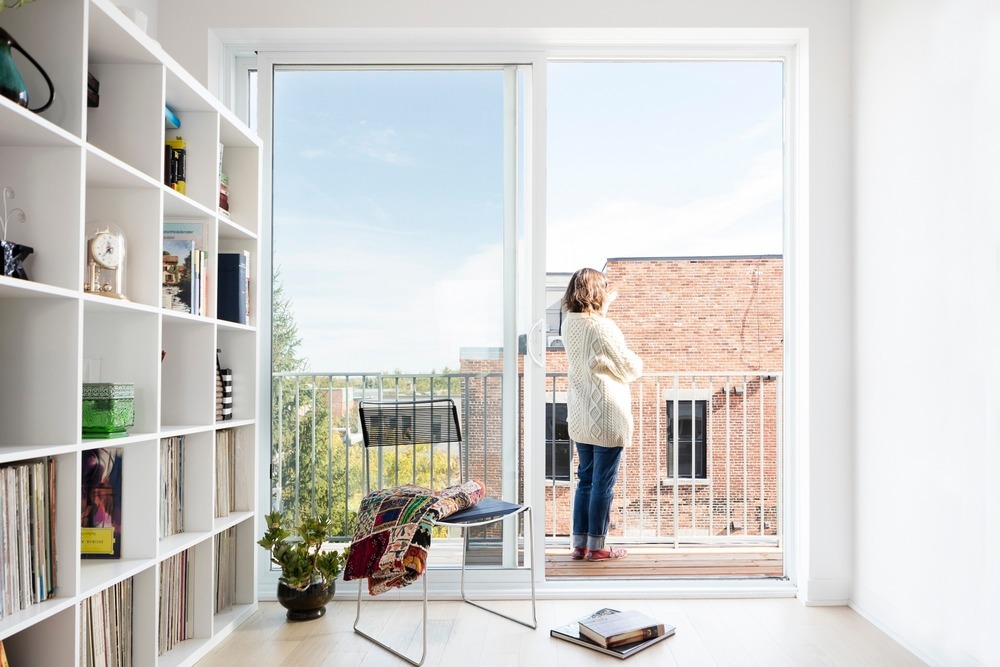 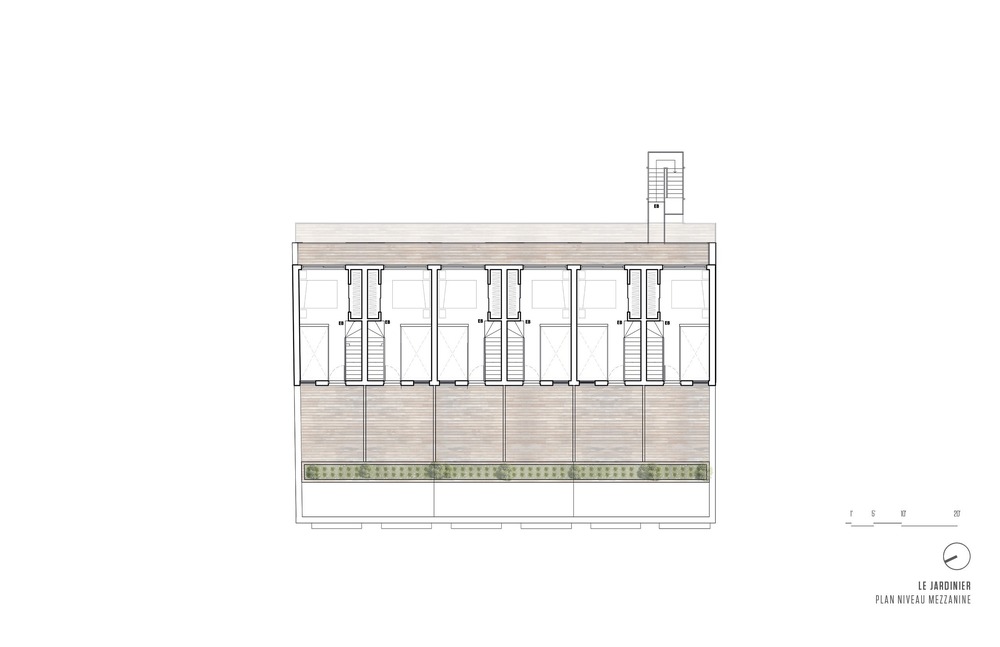 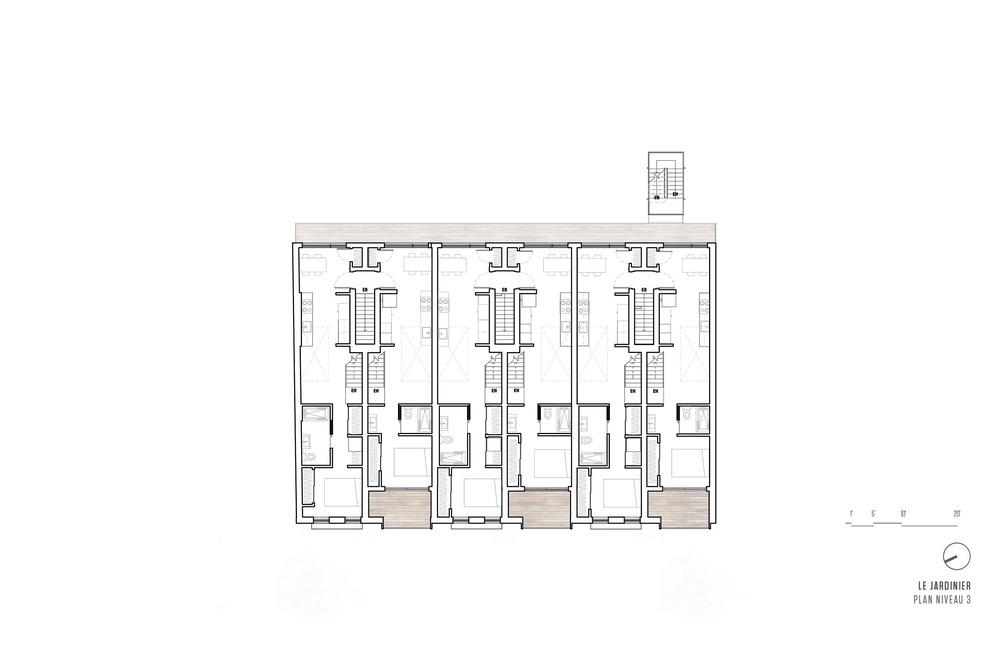 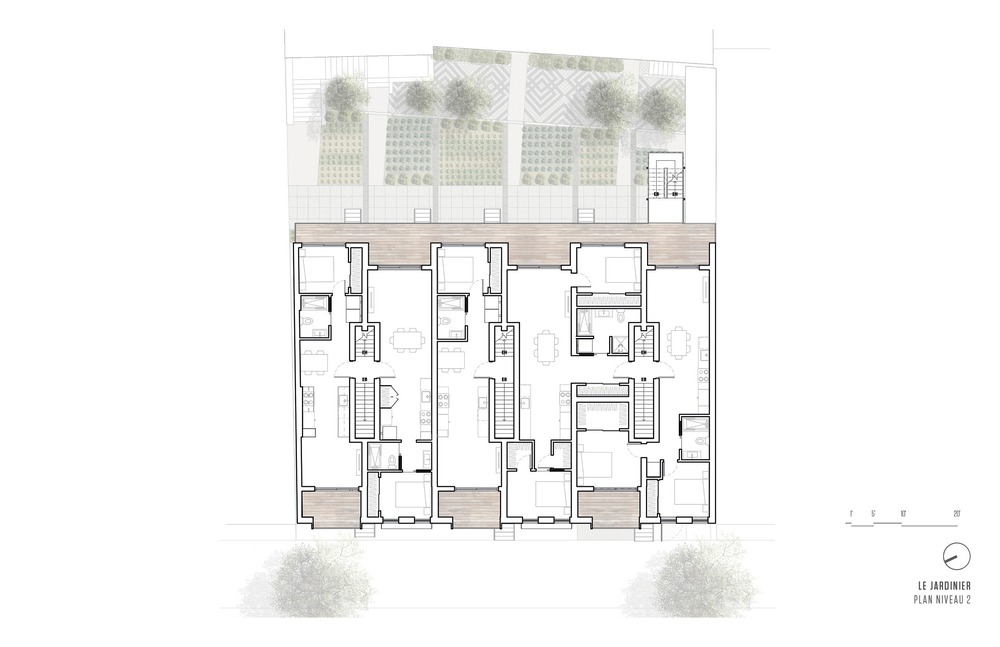 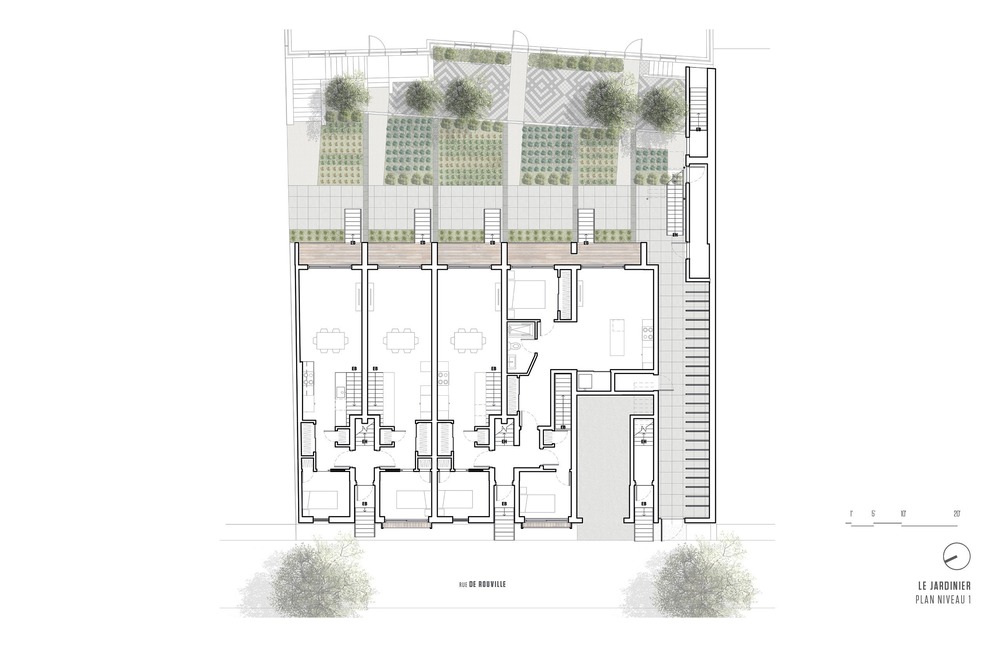 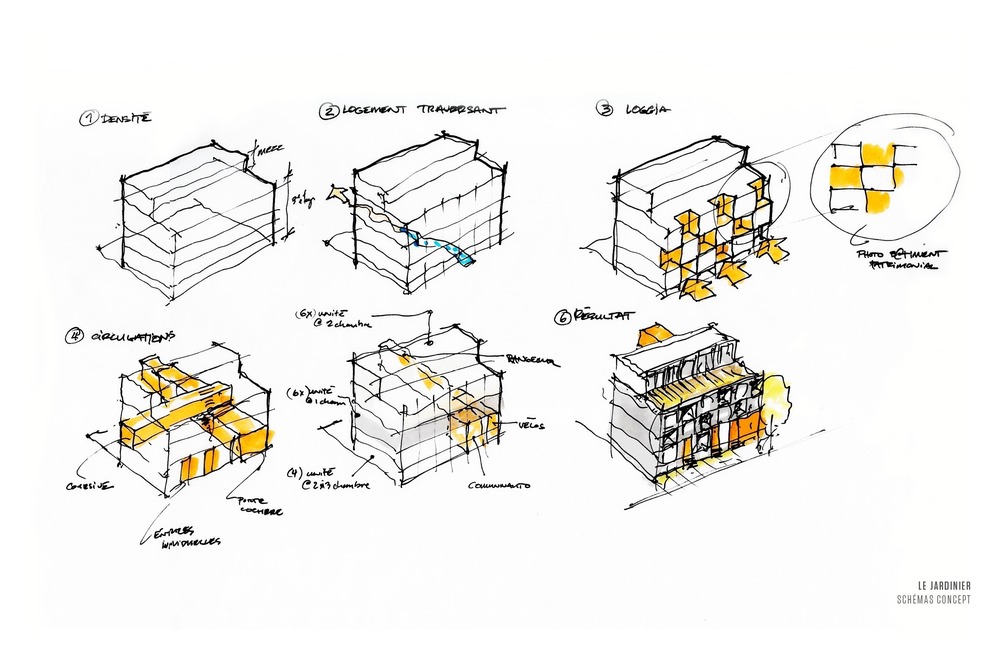 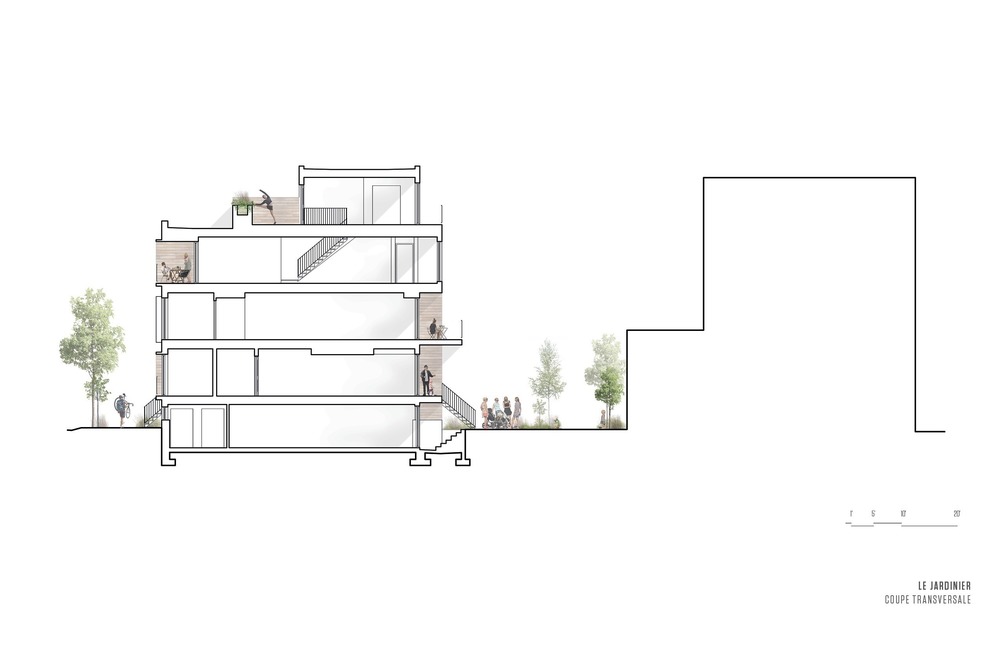