Ten years ago, the Faculty of Applied Science and Engineering at the University of Toronto recognized a pressing need to construct a new facility that would foster research excellence and support the potential of its growing students and staff. In response, Toronto’s Montgomery Sisam Architects and U.K.-based Feilden Clegg Bradley Studios designed a nine-storey, 160,000-sq.-ft. facility that welcomed its first class in September 2018, setting a new standard for a Faculty which is known as the number one ranked engineering school in Canada and among the best in the entire world.

The Myhal Centre for Engineering, Innovation, and Entrepreneurship — named after donors and innovation advocates Rayla and George Myhal — was designed according to the priorities of function, collaboration and energy efficiency. In addition to a grand, four-storey atrium and open-air terrace, the exposed concrete and abundant wood facility contains a slew of tech-enhanced spaces: eight design studios, five active-learning classrooms and a two-storey aerial robotics laboratory.

The facility also contains a 468-seat classroom auditorium with an 18-m. long digital screen and a unique seating configuration, the first of its kind in North America. Here, students sit in small groups around tables, allowing them to collaborate, share ideas and engage more actively with each other and their instructors. “The building encourages informal and spontaneous interaction,” says Robert Davies, principal at Montgomery Sisam Architects. “It is often through chance encounters that innovation occurs and entrepreneurial thinking flourishes.”

Though the building is the 14th in the University’s engineering precinct, it is among the most energy-efficient on the downtown campus; and while LEED Certification was initially considered, the design team opted for Tier 2 Toronto Green Standard Performance Measures and energy savings instead. From a 80-kW photovoltaic roof system to solar panels, cisterns for rainwater irrigation, LED lighting, a high-performance building envelope, passive heating and cooling systems, and more, the building measures in at 25 per cent efficiency improvement over the Ontario Building Code, with a first-year cost savings of nearly $10,000: an impressive feat for a building of its size with a hyper focus on high-tech upgrades.

Equally impressive is the way in which the building responds to the historic fabric of its surrounding campus. Though modern in material, the Myhal Centre is demure in form with a purposeful approach that ensures a non-competitive aesthetic when compared to its neighbouring Romanesque Renaissance and Gothic Revival structures. “We were interested in an architecture that aspires to an idea of engineering precision while encouraging the messy and chaotic activities of human beings,” said Davies. “The new Centre is an architecture that is disciplined and quiet, understated; not about itself but about the activities that will occur within it and change over time.”

Through its understated architecture, impressive tech features and progressive energy-efficiency, the new Myhal Centre leads by example for the aspiring engineers and inspiring faculty who will utilize its resources for years to come. 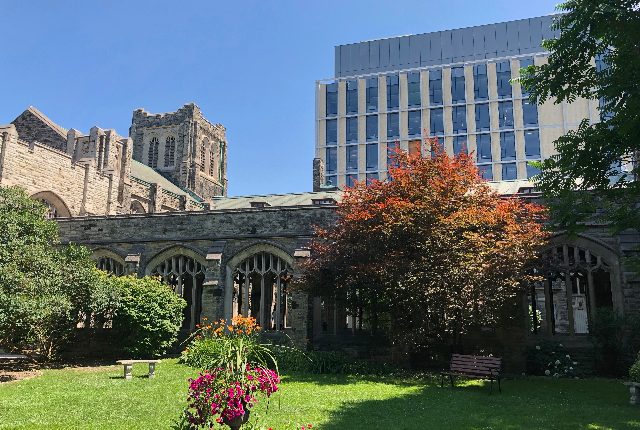 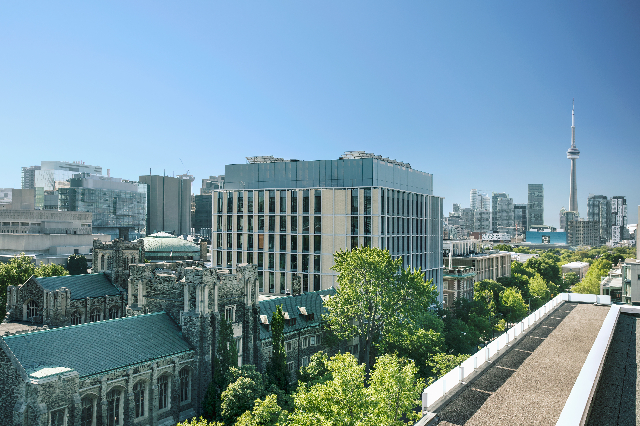 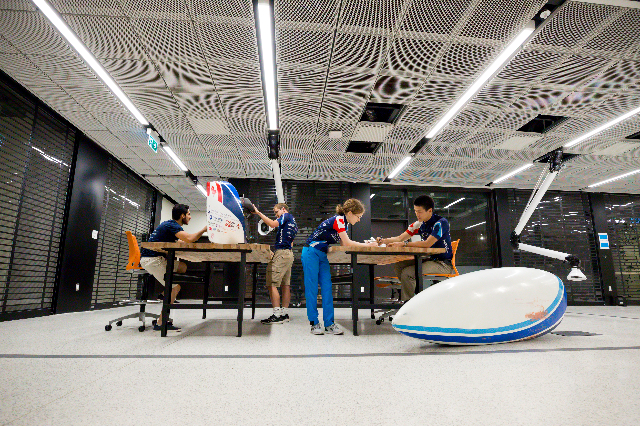 Members of the Human Powered Vehicles Design Team work on their speedbike in the Skule™ Arena. The multifunctional student space was supported by a $1-million donation from the Engineering Society, the undergraduate student government of the Faculty of Applied Science & Engineering. (Roberta Baker) 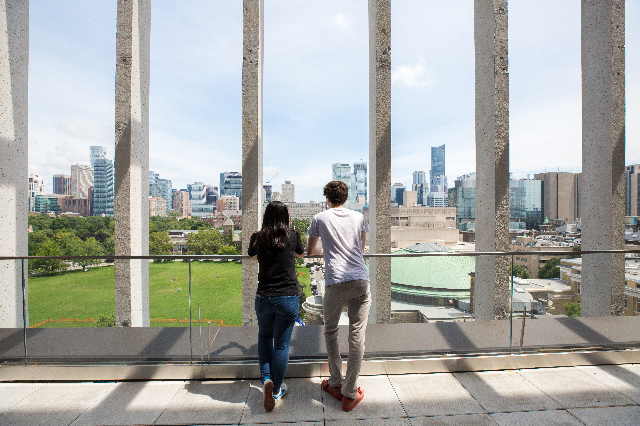