Transit users and commuters across Ontario can look forward to transportation improvements as part of the Government of Ontario’s historic new transportation vision, Premier Doug Ford announced today. Joined by Jeff Yurek, Minister of Transportation, and Monte McNaughton, Minister of Infrastructure, Ford announced a $28.5 billion expansion to Ontario’s transit network. According to Ford, this is the most money ever invested to get shovels in the ground and get new subways built.

“Our government is investing in transportation to bring relief and new opportunities to transit users and commuters,” said Ford. “We announced the new Ontario Line to deal with the dangerous congestion on Line 1, the Yonge North Subway Extension that will connect the subway to one of the region’s largest employment centres, the three-stop Scarborough Subway Extension to better serve communities, and the Eglinton Crosstown West Extension — a large portion of which will be built underground to keep people and goods moving on our roadways. This is our plan, our priority.”

It’s a historic day in Ontario! I am so pleased to unveil our transit vision — a plan for the 21st century!

Our plan — our priority to get Ontarians moving. #ONpoli #TOpoli #Transit pic.twitter.com/fhbuHkSNiS

The province will invest $11.2 billion to support these four rapid transit projects. This funding over-delivers on the government’s commitment to put $5 billion into subway extensions.

Premier Doug Ford says the province has been in discussions with the three other governments about funding for the project, but says if need be, Ontario will shoulder the whole burden. He says that while the province hopes the federal government, the City of Toronto and York Region will chip in more than half of a $28.5-billion transit project, Ontario is willing to foot the whole bill.

The plan includes a Toronto downtown subway relief line that will be twice as long as the one considered by the city, completed two years earlier and cost $3.7 billion more.

The Progressive Conservative government says the new 15-kilometre relief line will run from Ontario Place in the city’s west to the Ontario Science Centre in the east.

The city’s current plan for the relief line runs 7.5 kilometres from the subway line on Danforth Avenue to the line on University Avenue in Toronto’s core.

The province says it can deliver the project by 2027 _ two years earlier than the city’s projections – using stand-alone technology and a different procurement method. The project will cost $10.9 billion, up from the city’s $7.2 billion estimate for its version of the line. 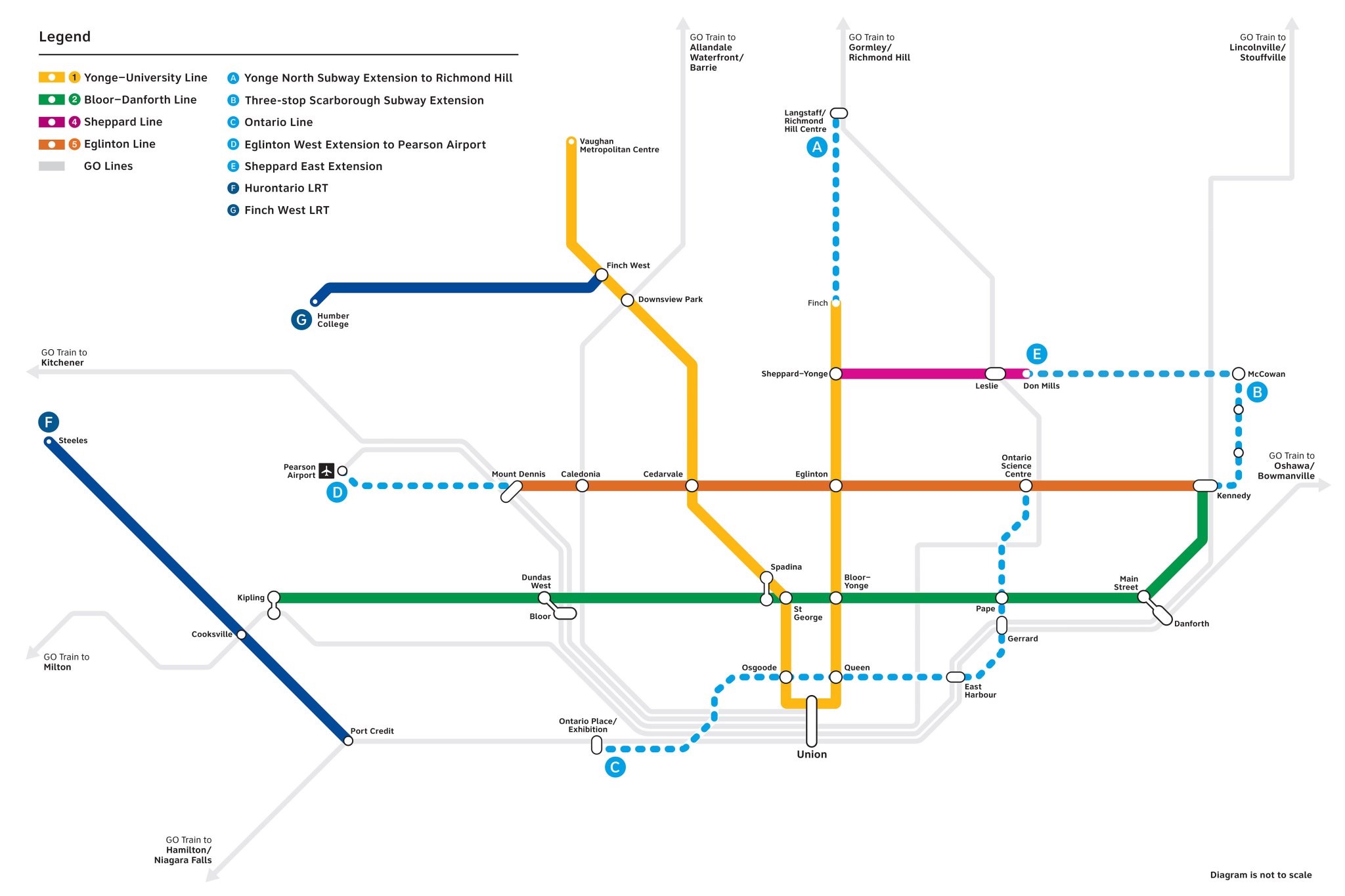 According to the Ford, this funding is in addition to the significant contributions made to transportation in Ontario. In just nine months, Ontario has delivered the long asked for expansion of GO Train service to Niagara Falls and St. Catharines, years ahead of schedule; dramatically enhanced GO Train service to Kitchener-Waterloo region; committed billions to transit projects for Hamilton and Ottawa regions; moved ahead with the long-awaited light rail transit for Mississauga; and announced $1.3 billion to repair and rebuild highways across the province, as well as billions in infrastructure to better support our rural communities.

Congestion knows no borders. We need to get transit built now that connects people across the GTA. The Hurontario LRT & Eglinton West extension to @TorontoPearson are important for Mississauga. Pleased to see @Fordnation & @JeffYurekMPP make regional transit a provincial priority

Toronto Mayor John Tory was not at the announcement because he hadn’t been fully informed about it, he said a day earlier.

Tory said the city continues to be concerned that any changes in its transit planning could lead to delays.

As part of the announcement today, Premier Ford reaffirmed the government’s commitment to working with the City of Toronto to upload the TTC subway infrastructure.

“The TTC is a vital service that supports not just Torontonians but the people of Ontario,” said Yurek. “Our government is continuing to work in good faith with the city under the Terms of Reference to make sure that we can build better transit faster.”

The #OntarioLine will open up new opportunities for transit oriented development for affordable housing, key priorities of the Board through our Superlinx and Housing advocacy. #onpoli #topoli

Ford has promised to upload responsibility for Toronto’s subway system, including all future projects, to the province. The Toronto Transit Commission would retain control of the day-to-day operations of the subway, buses, and street cars, and the city would keep fare box revenue.

The premier has said the TTC has done well in operating the system but he believes the province can build subways more efficiently. The province could use its broader regional transit planning powers and fiscal flexibility to deliver the projects, he has said.

The province and city are negotiating the terms of the upload, a process that is still ongoing despite of the impending announcement from the province.

The Yonge North Subway Extension is a cross-jurisdictional project spanning the City of Toronto, City of Markham, City of Vaughan and the City of Richmond Hill. It extends 7.4 kilometres north on Yonge Street from Finch Station to the Richmond Hill/Langstaff Gateway Urban Growth Centre at Highway 7.

“The Yonge North Subway Extension is the most justified rapid transit investment in the GTA,” said City of Markham Mayor Frank Scarpitti. “As Chair of the York Region Rapid Transit Corporation, I have dedicated my time to advancing this project, to securing funding and to starting construction during this term of office.  Today’s announcement is welcome news to the beleaguered York Region commuters and I applaud the provincial government for its bold initiative to connect the 905 and 416.”

This critical rapid transit link will include up to six stations at Cummer/Drewry, Steeles, Clark, Royal Orchard, Langstaff/Longbridge and Richmond Hill Centre. It will also include two intermodal terminals and 2,000 commuter parking spaces near Yonge Street and Highway 407.

With Minister @MonteMcNaughton, Minister @JeffYurekMPP, @Sflecce. The Yonge North Subway Extension is part of a bold plan to build a regional rapid transit network that will get our region moving and open up economic opportunities. #YongeSubwayNow #onpoli pic.twitter.com/2Dk8ic6dqI

“This project supports vital transportation networks that connect cities, and it will help continue our economic growth,” said City of Richmond Hill Mayor Dave Barrow. “We appreciate this investment.”

Pleased to be here at the announcement of the Yonge Street Subway to Richmond Hill! More details to follow. pic.twitter.com/2Dg4Z23MQ3

“The Yonge North Subway Extension is very important to those who live, work and commute in Vaughan,” said City of Vaughan Mayor Maurizio Bevilacqua. “This investment shows the importance the Province places on a connected network across the GTA.”

“Today we are embarking on the most ambitious provincial transit buildout Ontario has ever seen,” added McNaughton. “This is great for people and good for jobs.”

– The Yonge North Subway Extension will cost $5.6 billion and should be open soon after the Ontario Line.

– The Scarborough Subway Extension will cost $5.5 billion and will be delivered before 2030.

– The Eglinton Crosstown West Extension will cost $4.7 billion and will be delivered before 2031.

– The projects will require a combined $28.5 billion, of which the province has committed $11.2 billion.

– With files from THE CANADIAN PRESS

Canadian renters will search for more affordable rentals because of COVID-19:…

Canadians outfitting backyards with pools to deal with COVID 19 pandemic