The average monthly rent in the Greater Toronto Area (GTA)  increased 10 per cent year over year in March to $2,182 from $1,975 in March 2021, according to the latest Bullpen Research & Consulting and TorontoRentals.com Toronto GTA Rent Report. 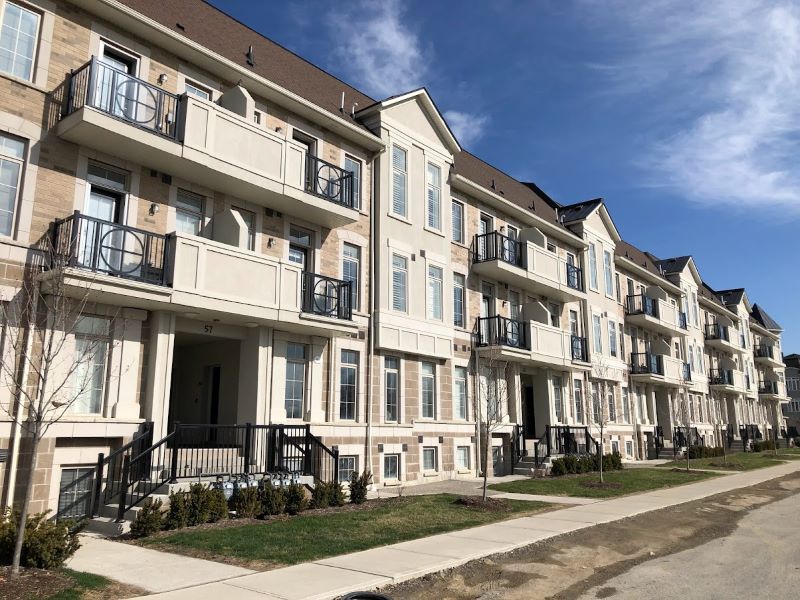 Since April 2021, the average rent has increased month over month for 10 of the last 12 months as the rental market trends back up after the height of the COVID-19 pandemic. Average monthly rents declined every month from January 2020 to March 2021.

With interest rates rising, some prospective buyers are likely to stay in the rental market this year instead of buying. The colder weather in March could have dissuaded some tire-kickers from looking at property, as could have the sixth wave of COVID-19.

Moving forward, new housing completions are expected to rise in the GTA in 2022 adding more supply. Persistent inflation will drive up the costs for landlords, and they will try to pass these on to tenants via higher rents. Rents are expected to continue to increase, but not at the same pace experienced in the second half of last year. 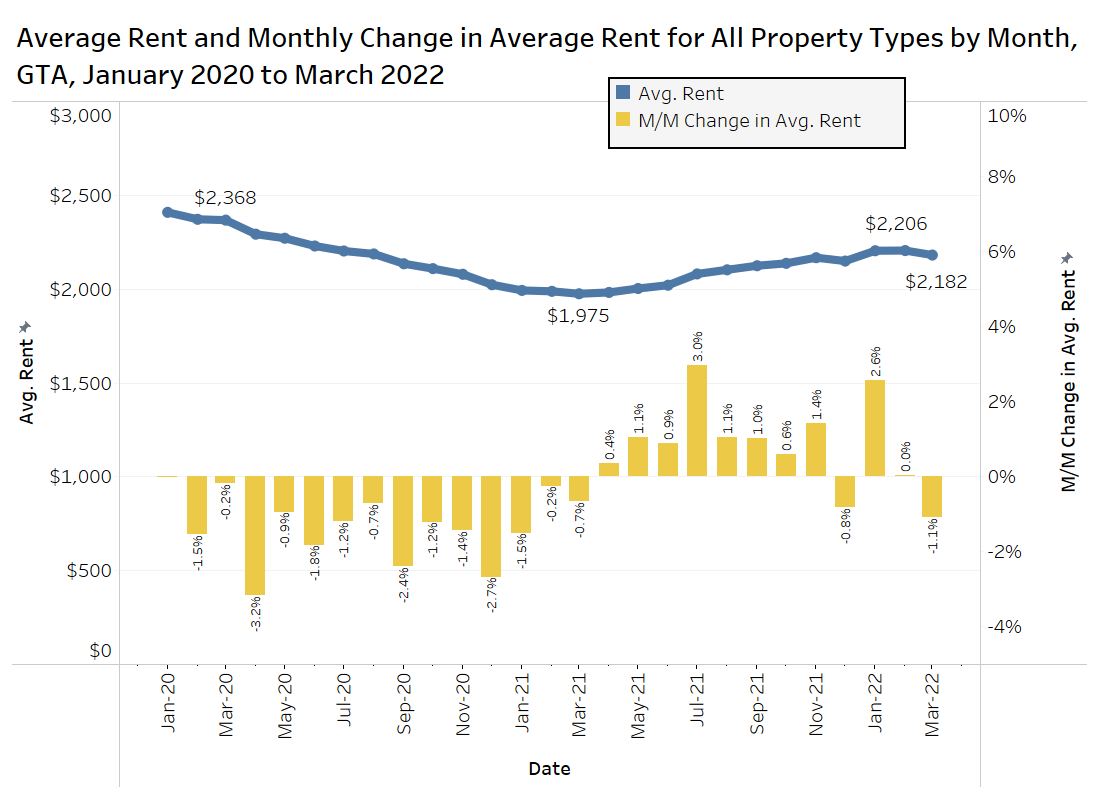 After strong rent growth in the second half of last year, average rents in the GTA have started to flatten, with most of the major municipalities in the GTA experiencing monthly declines. The monthly declines are across the board by geography, property type and bedroom count.

“After very strong growth in the second half of 2021, average rental rates in the GTA have flattened out, with this trend consistent across property types, bedroom types and geographic areas,” said Ben Myers, president of Bullpen Research & Consulting. “Bullpen and Rentals.ca still expect rents to increase in 2022, but at a slower pace than previously forecasted.” 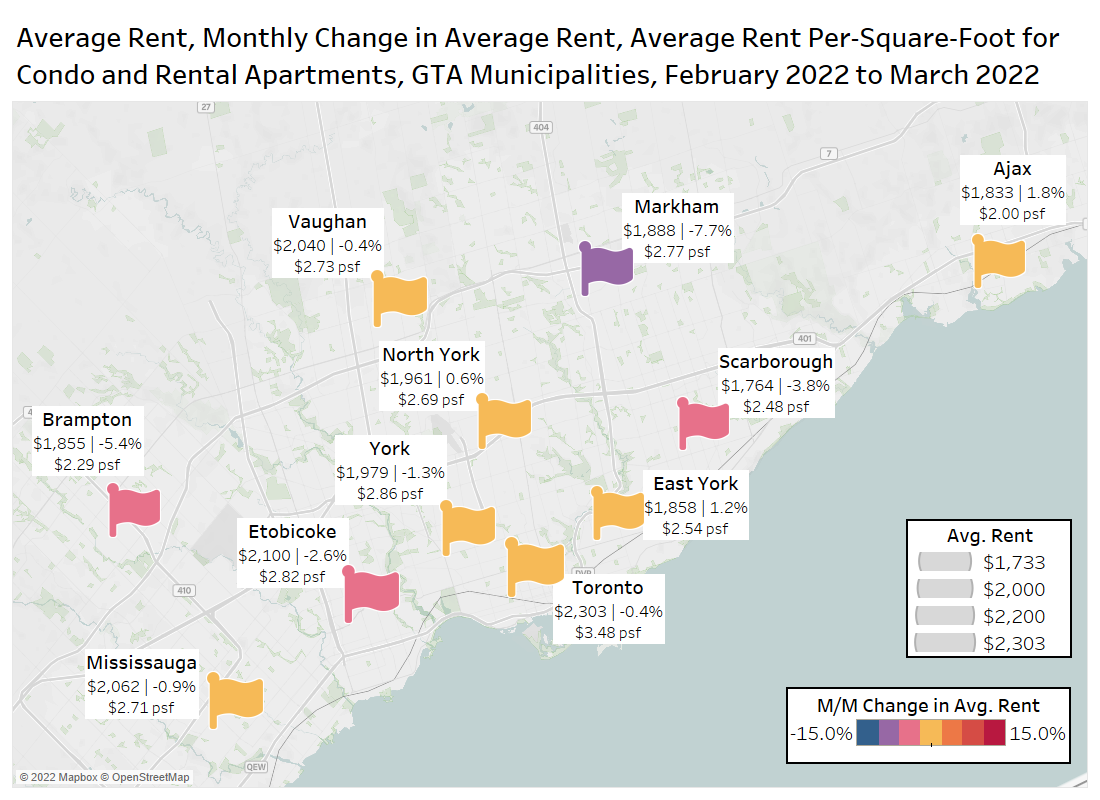 The spring market should see increased tenant demand, and with condo premiums rising from 15 per cent to 35 per cent in the major municipalities, the high end of the rental market is strong again and that could pull up rents in the near future.

While condos consistently rent for higher prices than apartments because they are newer with more amenities, this premium declined during the pandemic as demand for expensive prime condo projects close to employment plummeted. But rents for condos have risen again as employees return to downtown offices and their places of employment.

Average rents for condominium rentals for studios, one-, two- and three-bedroom units have risen significantly in March from January 2021. 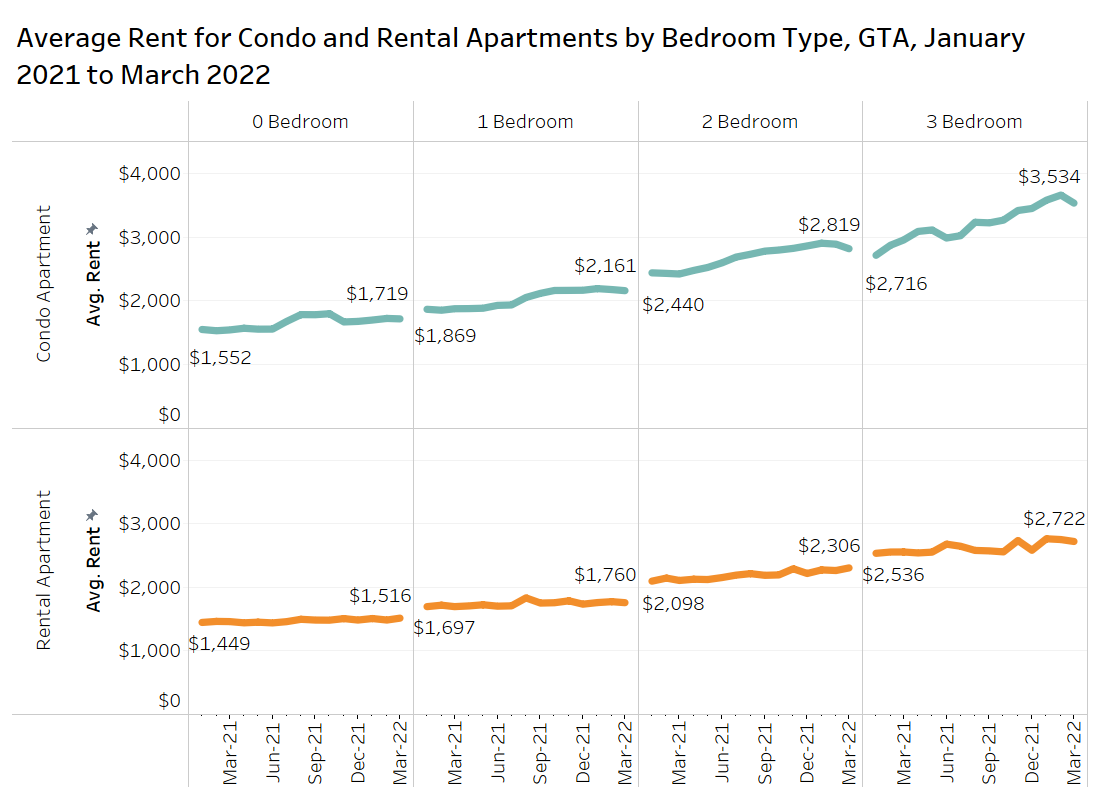