After five straight quarterly declines, total investments were up 43 per cent compared to Q1 2019, with strong momentum heading into the second half of 2019. 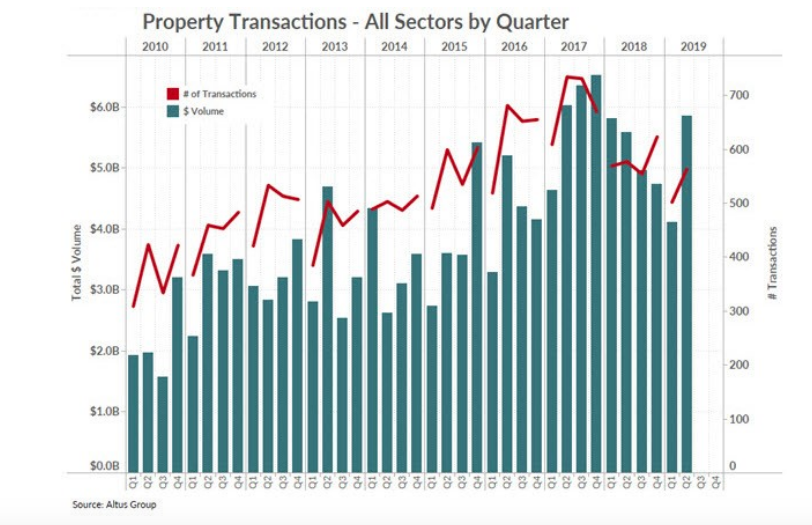 “Second quarter transactions managed to record the fourth highest quarterly investment totals ever after five consecutive quarterly declines. Confidence in the GTA market remains high as investors continue to view the GTA as a stable and attractive market, which provides a strong potential for higher returns,” says Altus Group.

Re-development sites remain stable as it accounted for nearly 38 per cent of all investments.

The largest transaction seen this quarter was the $640 million sale of Atrium on Bay in the heart of downtown Toronto.

Altus Group states that pent up demand and low office vacancy rates, 3.1 per cent in Downtown Toronto and 6.8 per cent in the GTA for Q2, have resulted in growing demand for office space in submarkets just outside of the core.

The land sectors collectively accounted for $2.2 billion, which according to Altus Group, represents a 20 per cent increase compared to the previous quarter.

Although the ICI land sector saw a 47 per cent decrease compared to the same quarter last year, it was also up 69 per cent compared to the previous quarter, and registered $701 million in transactions. 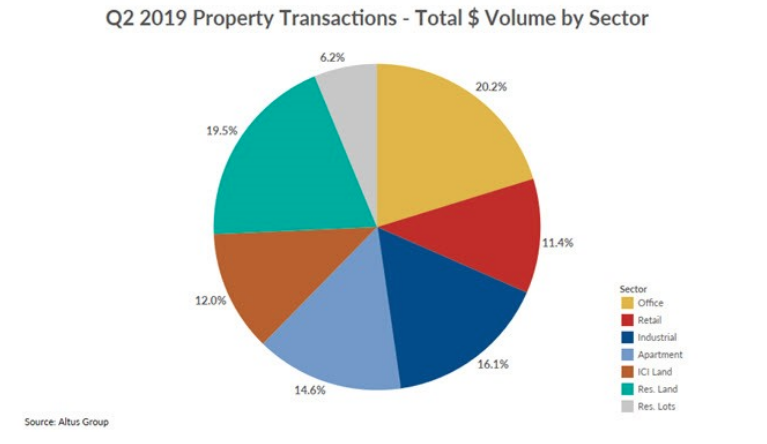 Future high density re-development sites comprised nearly 60 per cent of the $1.1 billion recorded in the residential land sector this quarter, with the largest sale being 39 Newcastle Street located in Etobicoke.

As housing demand persists due to the rapid population growth in the GTA, Altus Group suggests residential re-development projects will continue to be in the forefront.

“Investors continue to look at options to re-position and maximize their returns through the intensification of excess lands existing on current assets,” says Altus Group.

The apartment sector saw a 266 per cent jump from the first quarter and also a 52 per cent increase compared to the same period last year.

The retail sector was the most traded asset this quarter and saw a 25 per cent increase in investments compared to the same quarter last year.

According to the Altus Group Investment Trends Survey, investors remain particularly confident in the industrial sector as vacancy in the GTA remains tight, with second quarter vacancies sitting at 0.8 per cent.

The industrial sector recorded $944 million of investments this quarter, which is up 22 per cent compared to the previous quarter and up 20 per cent in comparison with the same period last year.

With the emergence of e-commerce resulting in the expectation of same-day deliveries, warehouse space within proximity of the GTA has lead to a growing demand for larger format warehouse facilities containing higher than average ceiling heights.

The survey states that purchaser activity this quarter was predominantly comprised of private investors, while institutional buyers and public investors acquired the larger trophy assets.

‘Proptech’ is finally disrupting the world of commercial real estate

EVE Park Community Gets Zoning Approval from City of London