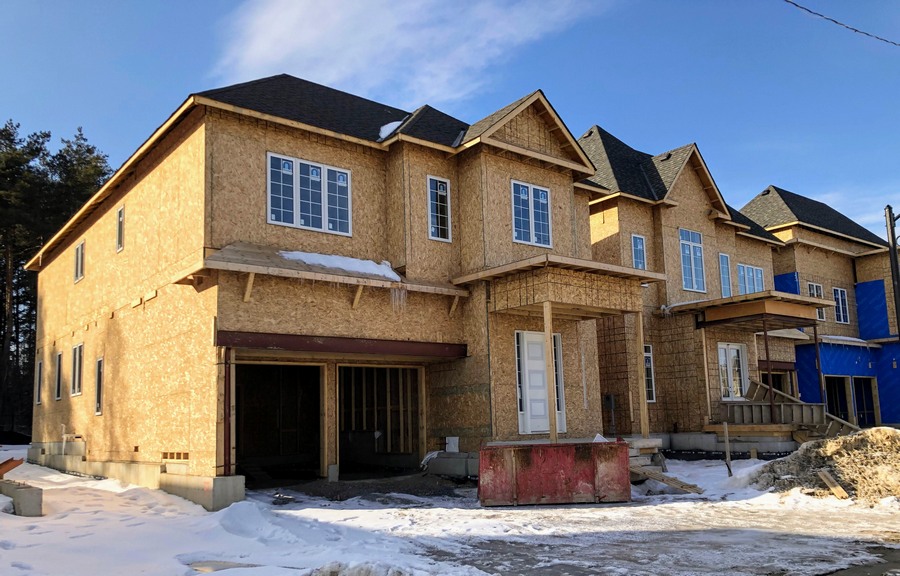 The country’s hot housing market drove economic growth last year as the economy ended 2021 on a high note, eking out a gain to start 2022, and giving more ammunition to a central bank set to raise rates.

Statistics Canada said Tuesday the economy grew 4.6 per cent last year, compared with a decline of 5.2 per cent in 2020, the first year of the COVID-19 pandemic. Growth in the fourth quarter came in at an annualized rate of 6.7 per cent.

Output was flat at the end of 2021 as Statistics Canada said real gross domestic product was essentially unchanged in December. That left the Canadian economy 0.4 per cent above pre-pandemic levels recorded in February 2020.

The largest contributor to last year’s growth was household spending and the housing market as new home construction, resales and renovations increased at levels second only to 1983 when the country emerged from a recession the previous year.

The Bank of Canada recently pointed to a better-than-expected economic end to 2021, a roaring housing market and inflation rates at three-decade highs in lifting its promise to hold the key rate at its emergency level of 0.25 per cent.

If, as widely expected, the Bank of Canada raises its trend-setting interest rate on Wednesday morning, the interest charged on things like mortgages will go up and impact the $1.93 trillion in residential mortgage debt.

“I do view it as probably the most serious vulnerability in the economy as we look ahead,” said BMO chief economist Douglas Porter said of household debt, “but overall household finances are actually in better shape now as a whole than they were before the pandemic began.”

Federal coffers have pumped out hundreds of billions in aid over the course of the pandemic to help workers and businesses.

On Tuesday, a report from the Finance Department said businesses that received the wage subsidies were less likely to close and about one-fifth of companies claiming the aid rehired at least one worker.

The report also said men and more established workers were “slightly more likely” to have jobs covered than women and younger workers.

The federal government has tapered its aid as conditions improved. Statistics Canada noted that government transfers to households declined in the fourth quarter to a point where its proportion of disposable income returned to pre-pandemic levels.

At the same time, the household savings rate dropped further between October and December, though the rate remains more than double where it was in the fourth quarter of 2019, pre-pandemic.

Statistics Canada also reported Tuesday that its preliminary estimate is that the economy grew by 0.2 per cent in January despite tightened restrictions linked to the Omicron wave that led to a loss of 200,000 jobs in the month.

Royce Mendes, managing director and head of macro strategy at Desjardins, said the economy likely built on that momentum in February as the country turned a corner on the latest wave of the pandemic.

“On its own, the headline GDP beat should easily be enough to wash away any doubts about whether the central bank will be hiking rates,” Mendes wrote in a note.

“However, the fist couple of months of 2022 have shown signs that both GDP and inflation are also beginning the year hotter than the central bank had anticipated.”

Parliamentary budget officer Yves Giroux on Tuesday said he expected the economy to rebound sharply in the second quarter and lead the economy to grow 3.9 per cent this year.

Giroux forecasted a federal deficit this fiscal year of $139.8 billion, and $47.9 billion in the next fiscal year that starts in April — both figures being better than the government projected in its financial update in December.

The government’s main spending estimates for the coming fiscal year, released Tuesday afternoon, outlined almost $397.6 billion in expenditures, which would be below the $413.8 billion planned for this fiscal year.

The Liberals’ outstanding election promises amount to $48.5 billion in new spending. Giroux warned that if much of that shows up in this year’s budget, debt and deficits would rise and threaten the government’s goal of keeping the debt declining as a proportion of GDP.

What Goes into the Cost of a Typical New Home in Metro Vancouver: HAVAN report