Industrial permit values in the province increased by 18.7 per cent, while institutional permits increased by 10.3 per cent. This means that the trend observed in January and February – of commercial sector decline, and industrial and institutional increase – continued through March, according to the data. 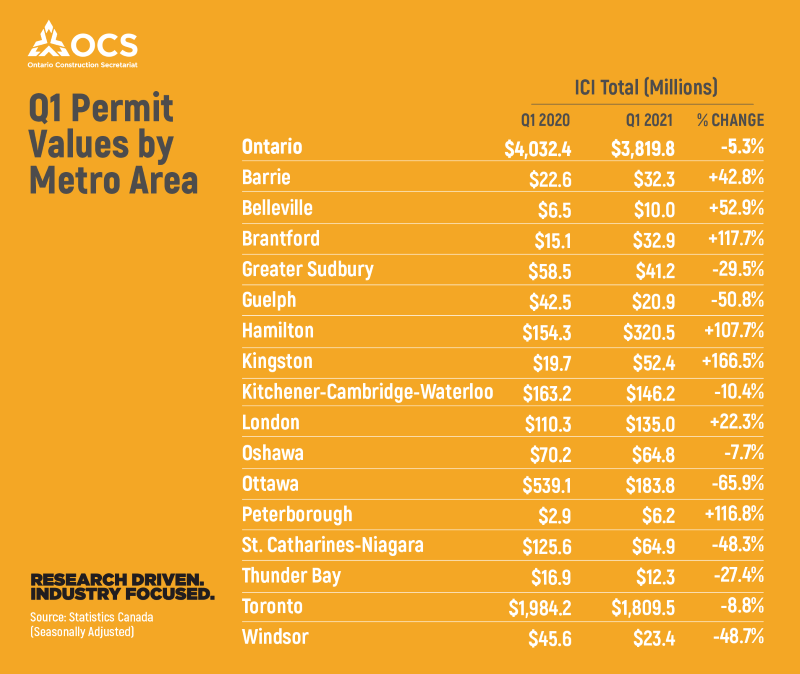 “While the first months of 2021 have seen escalating lockdown and stay-at-home order conditions in Ontario, construction industry employment has so far been relatively stable. In the past six months, construction employment in Ontario has remained close to 540,000, not straying more than about one percent higher or lower,” says the Ontario Construction Secretariat. “The biggest month-over-month change was a 2 per cent increase between February and March of this year. While construction employment has been relatively stable, it is yet to return to pre-pandemic levels. In the first quarter of 2020, before the pandemic took hold, employment in Ontario’s construction industry averaged 561,000 compared to 538,000 in the first quarter of 2021.”

“It should be noted for both the unemployment rate and the construction employment data that the April Labour Force Survey reflects conditions during the week of April 11-17. This means that the data would capture the impact of the April 8 stay-at-home order, but not the strengthened stay-at-home order of April 16. The effects of the April 16 order will not be known until May’s Labour Force Survey data is released in early June,” says the Ontario Construction Secretariat.

Feds invest $12B in Ontario public transit projects in GTHA