A survey released by private residential mortgage insurer, Sagen, in collaboration with Royal LePage, analyzed key trends among first-time homebuyers who purchased a home within the last two years (the survey was conducted between February 17, 2021 to March 16, 2021 by Environics Research). 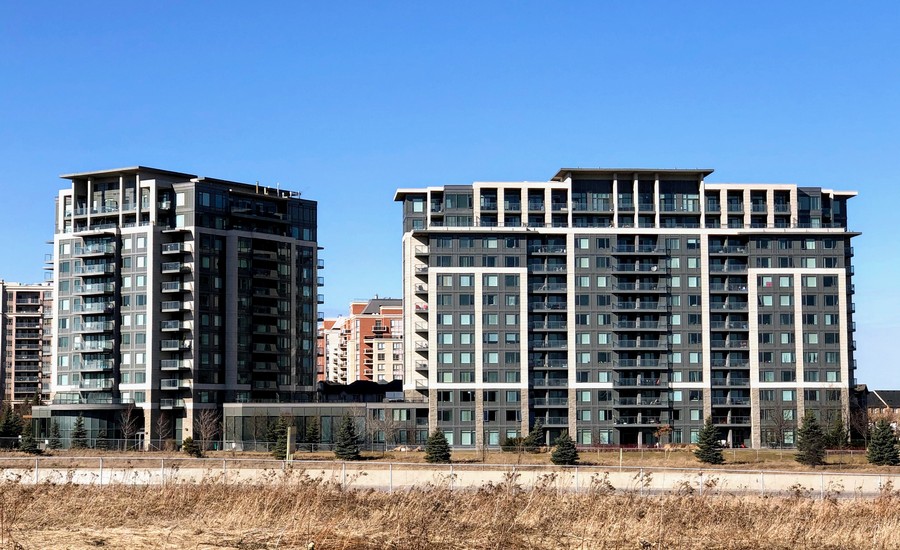 Sixty-two per cent of respondents nationwide said that before buying their first home, they worried they might miss out on a property they wanted because of an insufficient down payment. According to Royal LePage, this reflects a five percent increase compared to the same survey question in 2019.

“It’s not at all surprising that first-time homebuyers are experiencing anxiety about the size of their down payment,” said Phil Soper, president and CEO, Royal LePage.  While supply has shown signs of improving during the spring market, Soper added that inventory remains low for current buyers, adding more stress to an already challenging process.

Well above the national average, respondents in Canada’s largest urban centres were increasingly worried that they would not be able to afford a down payment, compared to respondents in 2019. Seventy-five per cent of first-time buyers in Toronto reported feeling worried that they would miss out on buying a home because of an insufficient down payment (68% in 2019).  Following Toronto, for the same question, Vancouver reported 69 per cent (58% in 2019) and Montreal reported 63 per cent (60% in 2019). 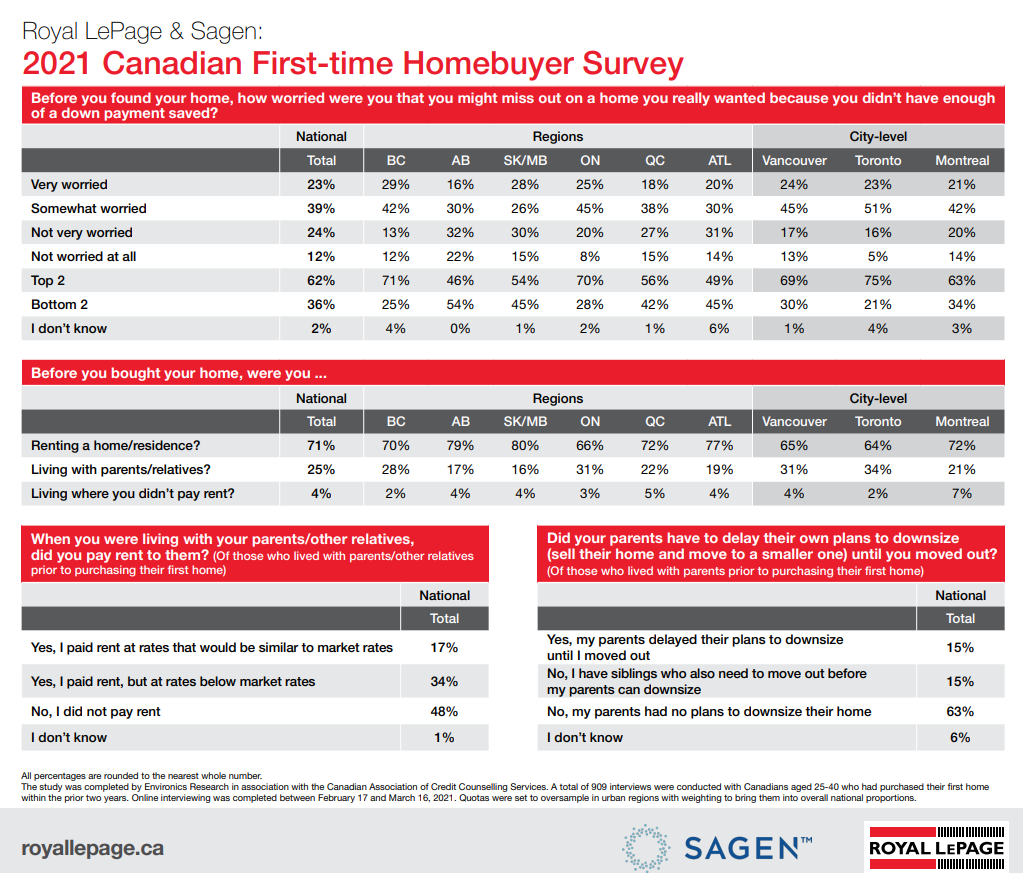 “Although COVID-19 has impacted first-time buyers across the country, many have been able to save and buy their home sooner than expected,” said Stuart Levings, president and CEO of Sagen. “The hurdle causing anxiety for first-time homebuyers is saving for a down payment in an environment of rising home prices in many parts of the country. While some have parents who can step in, many do not and they are struggling to get into the market.”

When asked to describe their housing situation before purchasing their first home, 25 per cent of respondents nationwide said they lived with parents or relatives (unchanged from 2019). Fifty per cent of those living with family paid rent to their families (43% in 2019), and of those paying rent, 34 per cent said they paid less than the market value (30% in 2019).

Seventy per cent of first-time homebuyers in Ontario expressed feeling worried their down payment would not be enough to get the home they wanted (60% in 2019) prior to purchasing their first property, compared to 75 per cent of respondents in Toronto (68% in 2019). Among the surveyed regions, Toronto respondents posted the highest level of anxiety in Canada.

“For many people, buying your first home lands on two important checklists: the biggest decisions you’ll make in your life, and the things that scare you the most,” said Tom Storey, real estate agent, Royal LePage Signature Realty. “Low interest rates mean the carrying cost of a mortgage is manageable for many young Canadians, but with inventory so low and rapid home price increases, there is a lot of competition in the market. This is adding an extra layer of anxiety to an already stressful process.”

Storey added that low borrowing costs and a softening in the Toronto condominium market did offer a rare opportunity for first-time buyers looking for a home in the city.

“Location is one of the most important factors a buyer considers when shopping for a home,” continued Storey. “Many of my first-time buyer clients are thinking long-term, about where and how they want to live in a post-pandemic world. For this reason, many will choose city living over the suburbs.”

Fifty-six per cent of first-time homebuyers in Quebec expressed anxiety about their down payment not stretching far enough to get the home they wanted (55% in 2019) prior to purchasing their first property, compared to 63 per cent of respondents located in Montreal (60% in 2019).

“Certainly, the strong competition in the current market, especially since the onset of the pandemic, makes any real estate transaction more anxiety-provoking than usual,” said Geneviève Langevin, real estate broker, Langevin immobilier at Royal LePage Altitude in Montreal. “Although the Greater Montreal Area has seen record-high increases in home prices over the last year and rising market competition, first-time home buyers we work with are resilient and remain committed to purchasing, even if the current market brings a number of challenges.”

“The pandemic definitely shifted home life priorities for many first-time homebuyers,” added Langevin. “While many young buyers are choosing to leave the city to enjoy more space and affordability, the desire for city living does not evaporate that easily. The neighbourhood’s walkability, the nightlife, the restaurants and shopping experience, as well as the proximity to friends will remain important to a large number of Montrealers when this pandemic is over,” added Langevin.

Seventy-one per cent of first-time homebuyers in British Columbia expressed feeling worried their down payment would not be enough to get the home they wanted (56% in 2019) prior to purchasing their first property, compared to 69 per cent of respondents in Vancouver (58% in 2019).

“The homebuying process comes with a lot of pressure and anxiety, especially for first-time buyers, but there is still a strong appetite to enter the market,” said Adil Dinani, sales representative, Royal LePage West Real Estate Services. “Young people in Vancouver and across the province have a very positive association with home ownership. While it may be stressful, it remains a desirable milestone for many.”

Dinani noted that the pandemic has given some first-time buyers the opportunity to look outside of Metro Vancouver. With opportunities to work remotely, Kelowna and other parts of the Okanagan have experienced strong demand from this cohort of buyers.

“Still, we’re seeing a tremendous amount of activity in the condo market right now, among those whose employment may not accommodate remote work long-term. Geography is still an important consideration in their search for a home,” said Dinani.

Albertans reported the lowest rate of anxiety of all the regions surveyed, as it pertains to the size of a down payment. Forty-six per cent of first-time homebuyers in the province expressed feeling worried their down payment would not be enough to get the home they wanted (57% in 2019) prior to purchasing their first property, much lower than the national average of 62 per cent.

“Calgary is one of the most affordable major cities in Canada,” said Doug Cabral, real estate agent, Royal LePage Benchmark. “Leading up to 2020, Alberta’s housing market favoured buyers. The pandemic shift has not influenced price appreciation quite as drastically as in other parts of the country, making it a bit easier for first-time buyers to come up with a sizable down payment.”

Cabral added that many first-time buyers have been able to skip the condo purchase and enter the detached market. However, there is more competition in this segment, alongside move-up buyers and those looking to downsize.

“First-time buyers are not purchasing their forever home, they are trying to get into the housing market. As such, they are willing to compromise on things like square footage or finishes and upgrades, but location is still one of the main drivers of their transaction,” added Cabral.

According to the survey, 17 per cent of respondents in Alberta lived with parents or other relatives before buying their first home, down from 23 per cent in 2019.

Fifty-four per cent of first-time homebuyers in Saskatchewan and Manitoba expressed feeling worried their down payment would not be enough to get the home they wanted (57% in 2019) prior to purchasing their first property.

Similar to Alberta, the Prairie provinces’ housing markets have been recovering over the last year, and first-time buyers taking advantage of increased savings and low interest rates are driving that recovery in the condominium and townhouse segments.

“Certainly, some level of anxiety is expected when preparing to purchase your first home, but I’ve found young buyers are entering the process well prepared and educated on the status of the current market,” said Norm Fisher, broker and owner, Royal LePage Vidorra in Saskatoon. “Due to an increase in demand over the past year, all buyers need to have their finances in order and be prepared to act quickly.”

Increased competition in the market is driving some first-time buyers in the region to expand their search areas outside the major cities.

“About 40 per cent of Winnipeg’s available residential inventory currently lies in the region’s bedroom communities,” said Michael Froese, broker and manager, Royal LePage Prime Real Estate. “First-time homebuyers are eager to get into the market wherever they can. At the moment, competition is not as high in some suburban areas, making homes more affordable and therefore more attractive to first-time buyers. In many areas, the city centre is within a thirty-minute drive.”

According to the survey, 16 per cent of respondents in Saskatchewan and Manitoba reported living with parents or other relatives before buying their first home, down from 23 per cent in 2019.

Forty-nine per cent of homebuyers in Atlantic Canada expressed feeling worried their down payment would not be enough to get the home they wanted (44% in 2019) prior to purchasing their first property, lower than the national average of 62 per cent.

“The speed at which the current market is moving makes it very challenging for first-time buyers,” said Matt Honsberger, broker and owner, Royal LePage Atlantic in Halifax, Nova Scotia. “While monthly carrying costs may not be an issue, coming up with a reasonable down payment often requires the help of parents or family members.

“The preference may be to live in urban centres, but the reality is many first-time homebuyers are being priced out of those markets. They’re having to expand their searches to other areas outside the downtown core, where competition is not as high and homes are more affordable,” added Honsberger.

According to the survey, 19 per cent of respondents in Atlantic Canada reported living with parents or other relatives before buying their first home (20% in 2019).