Inflation picks up steam in March to hit 6.7% amid war in Europe, supply chain woes 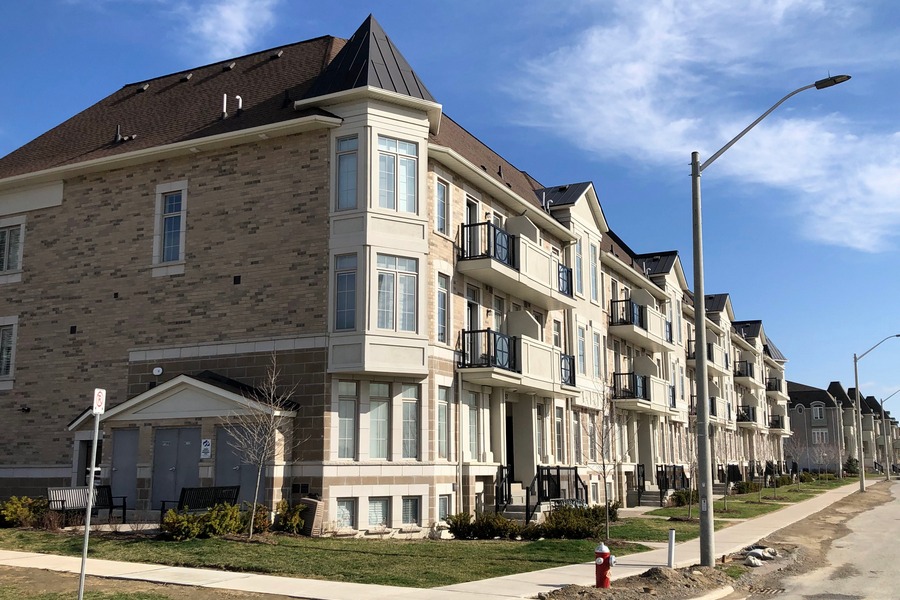 The March increase in the consumer price index compared with a gain of 5.7 per cent in February, and was the highest reading since inflation hit 6.9 per cent in January 1991 when the GST was introduced.

“Prices have increased in a single month as much as we saw over the course of the entire first year of the pandemic,” said David Macdonald, senior economist with the Canadian Centre for Policy Alternatives.

“These are historically high increases in prices across the board.” 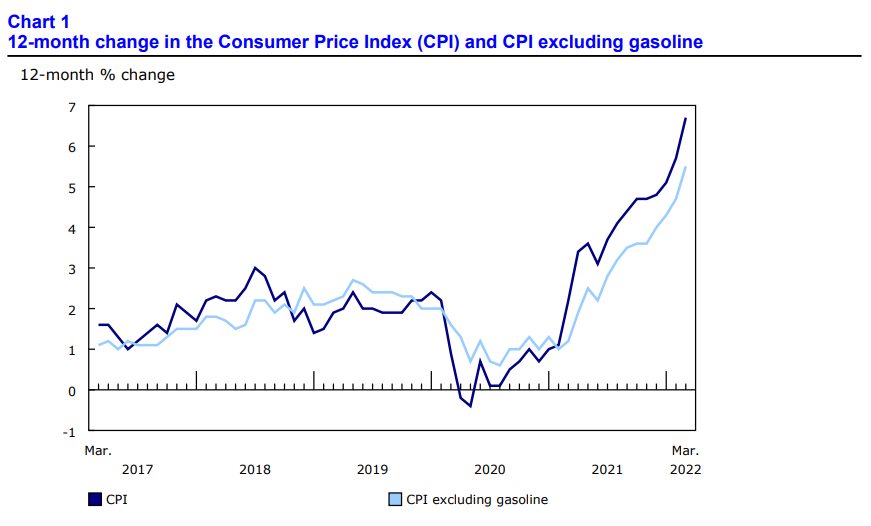 The big driver fuelling inflation was higher prices at the pumps as gasoline prices rose 39.8 per cent in March compared with the same month a year ago.

“Oil prices peaked in March. The throttle’s eased off a little bit since then but fuel prices are still high,” said Fred Bergman, senior policy analyst with the Atlantic Provinces Economic Council.

Statistics Canada said the consumer price index would have been up 5.5 per cent year over year if it had excluded gasoline from its calculations, suggesting far broader price pressures.

Prices were driven higher in March on the back of the country’s hot housing market, supply chain constraints and the war in Ukraine that has affected prices for oil and food, the agency said. 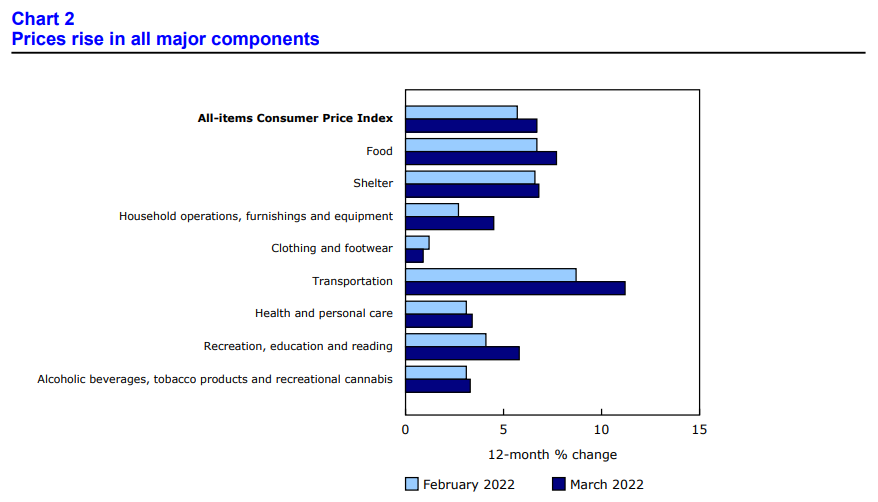 Prices for dairy products and eggs rose 8.5 per cent, the largest annual increase in dairy and egg prices since February 1983. 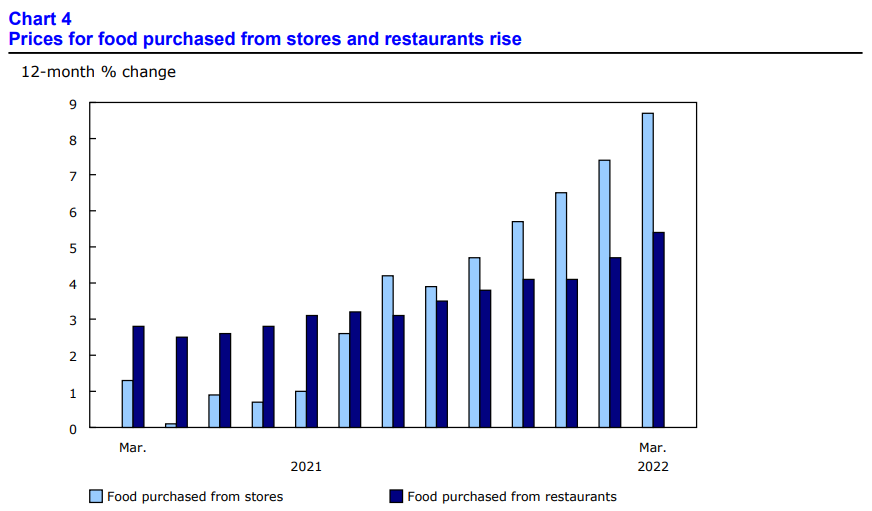 The avian flu outbreak in parts of Canada could send poultry prices even higher if more birds have to be euthanized, Bergman said.

The Canadian Food Inspection Agency said last week about 260,000 birds have been euthanized or killed by the virus in Alberta and Ontario amid the latest outbreak.

Meanwhile, Russia’s invasion of Ukraine was also blamed for jumps in pasta prices and cereal, the latter rising at the fastest annual pace since June 1990. Russia and Ukraine are major wheat exporters.

“It’s hurting lower-income earners more because they spend a larger portion of their budget on food, which is increasing at an even faster rate than overall inflation,” he said.

Provincially, Statistics Canada said growth was most pronounced in Prince Edward Island, where prices rose 8.9 per cent year over year. 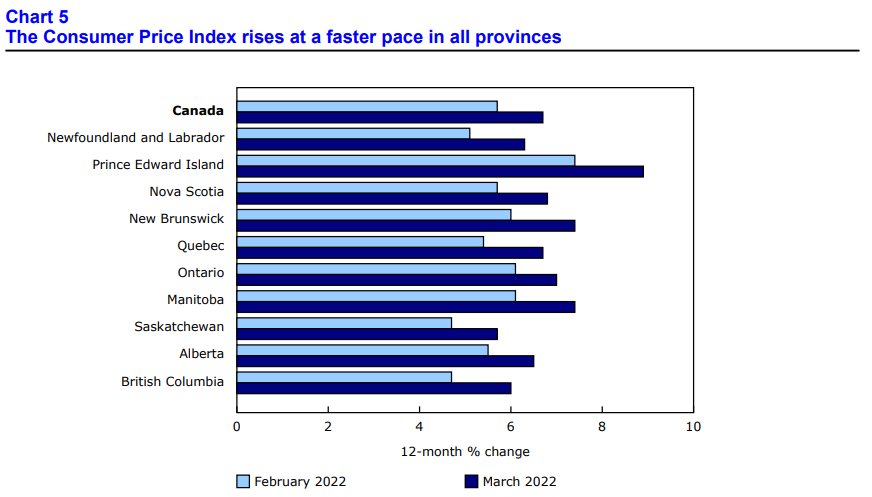 As prices rose faster on an annual basis in March, average hourly wages were up by 3.4 per cent, still far behind inflation and eating into consumers’ purchasing power across income levels, said BMO chief economist Douglas Porter.

“This is not sustainable to have a gap of more than three percentage points between inflation and wages,” he said.

“Either inflation has got to come down fast, or wages have got to rise up to to meet if not exceed inflation in fairly short order, and I think it’s going to be a little bit of both.”

The growing rate of inflation has spooked economists and central bankers amid signs that Canadians are beginning to expect inflation to stay higher for longer.

Last week, the Bank of Canada increased its key policy rate by half a percentage point, raising the benchmark interest rate to one per cent with warnings that more rate hikes are to come this year.

“The Bank of Canada has been behind the curve and they’ve recognized that and now they have to catch up,” Desjardins chief economist Jimmy Jean said.

“That’s why they went out with that 50-basis-point rate hike, and we think they have another one in store for the next meeting.”

Rising interest rates are expected to encourage saving and curb borrowing and spending, helping cool Canada’s housing market and the cost of goods. As demand goes down, prices tend to rise more slowly – or even edge down – easing inflation.

But the dampening effect of higher interest rates won’t be immediate.

“It does take time for those interest rate hikes to have an effect on the economy and on inflation,” he said.

The average of the three core measures of inflation, which are considered better gauges of underlying price pressures and closely tracked by the Bank of Canada, was 3.77 per cent in March. That’s the highest recorded since March 1991 and up from the 3.53 per cent in February.

Quick observation about today’s 6.7% inflation rate: excluding 1991 (which was a blip due to introducing the GST) this is Canada’s highest rate since early 1983.

Before I was born. pic.twitter.com/kU1itrhTkf

6th consecutive upward inflation projection revision by the Bank of Canada.
Inflation is expected to stay above the control range until Q2 2023. pic.twitter.com/oJl6Q9ktHW

Canada’s inflation was driven by oil and gas. Guess what happens to mortgage costs in the months ahead? pic.twitter.com/LRY6pvUOmH

A year ago, @bankofcanada governor Tiff Macklem assured us the inflation was temporary and it’d come back down to 2% by the end of 2021.

How can you be so wrong and yet keep your job?#cdnpoli pic.twitter.com/eneTiSpx50

🇨🇦 Seasonally adjusted core CPI up 1.0% in the past 2 months alone. Strongest 2-month increase since at least 1992. So much for transitory.@bankofcanada still way behind the inflation 8-ball

This report by The Canadian Press was first published April 20, 2022.

Priced out of Ontario, homebuyers turn their eyes to the Calgary real estate market