Infrastructure Ontario (IO) and Metrolinx have issued two Requests for Qualifications (RFQs) for the Ontario Line project. This is the first step in selecting the teams who will be responsible for constructing this major transit project. 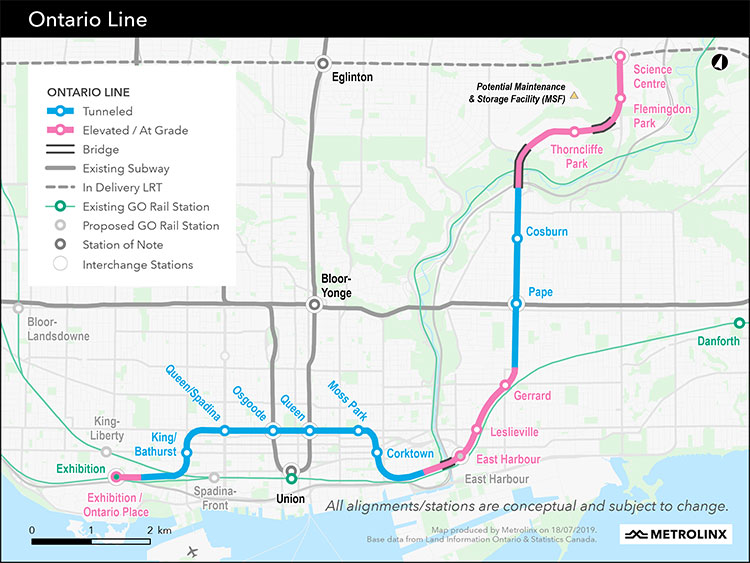 The Ontario Line is a 15.5-kilometre stand-alone rapid transit line that will connect the Ontario Science Centre to Exhibition/Ontario Place. Over half of the route is planned to run underground through new tunnels, with the remainder running along elevated and at-grade rail corridor sections of track. Fifteen stations are proposed, with numerous connections to the broader transit network, including GO Transit rail services, the Toronto Transit Commission’s subway Lines 1 and 2, the future Line 5 (Eglinton Crosstown LRT), as well as numerous bus and streetcar routes.

The Ontario Line is being delivered as three separate public-private partnership (P3) procurement contracts: one rolling stock, systems, operations and maintenance contract for the entire 15.5-kilometre line and two separate civil, stations and tunnel contracts – one for the southern segment and one for the northern segment of the line. The schedules for each contract will be aligned to allow for a single in-service date for the Ontario Line.

Creating three separate contracts of manageable size and acceptable risk will encourage competition and active participation from the market to support innovation and ensure that the right teams are in place to successfully deliver the line at the best value for taxpayers.

According to IO, The RFQs issued are for the first two P3 contracts, which include:

The RFQ for the northern civil, stations and tunnel contract, the north portion of the Ontario Line from Gerrard Station to the Ontario Science Centre, is expected to be issued in early 2022. The general scope includes seven stations, a three kilometre tunnel, two portals and the associated approach structures, bridges and elevated guideways.

IO and Metrolinx will evaluate RFQ submissions. Teams that possess the relevant experience and capacity to deliver each project will be shortlisted and invited to respond to a Request for Proposals in Fall 2020.

In addition to the three main P3 contracts, there will also be a series of early works projects for bridge, track and other preparatory activities to help advance the delivery of the Ontario Line. Early works will occur along the joint rail corridor where the Ontario Line will operate next to existing GO Transit rail services. These contracts will be procured traditionally and will begin to be issued to the market later this year.

The Ontario Line is one of four priority transit projects announced by the Province in 2019 for the Greater Toronto and Hamilton Area. Planning is underway for all four subway projects and procurements for the subway program are being staged to ensure each project is delivered successfully.