Investment in building construction plunged 45.9% in April: Stats Can

According to a Statistics Canada release, investment in building construction plunged 45.9% to $8.4 billion in April compared with the previous month. Previously, the largest national decline on record for the current series (which dates back to 2010) was a 3.9% decrease in August 2017. 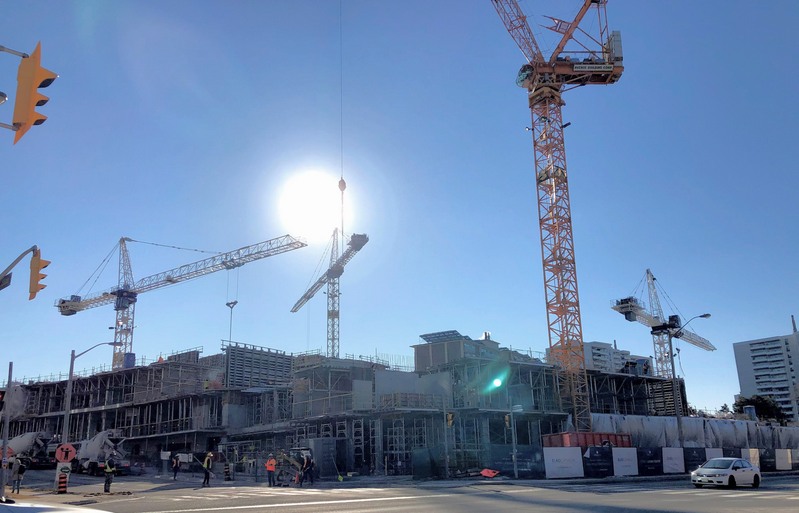 Both the residential (-49.2%) and non-residential (-38.8%) sectors reported record declines. Investment decreased in all provinces and territories, with Ontario (-$3.2 billion) and Quebec (-$2.5 billion) reporting the largest declines.

Public health measures put in place to slow the spread of COVID-19 severely impacted the construction industry in April as the largest provinces in the country shut down all non-essential construction sites, reports Stats Can.

On a constant dollar basis (2012=100), investment in building construction decreased by 45.7% to $6.9 billion (see the Stats Can Housing Statistics Portal).

According to Stats Can, all provinces and territories reported double-digit declines in residential investment for the month of April, with Quebec (-77.6% to $457 million) and Ontario (-46.8% to $2.4 billion) reporting the largest declines. In Quebec, all new residential construction sites remained closed through April 20, while in Ontario, all non-essential renovation construction was halted in accordance with public health requirements.

Declines in the residential sector varied by province, however, at a national level, the declines were felt more sharply in single family homes (-54.7%) than in multi-family dwellings (-43.5%).

Residential renovations largely ground to a halt across the country, with the exception of certain activities such as emergency and exterior repairs, as many projects were cancelled or deferred to comply with public health requirements. 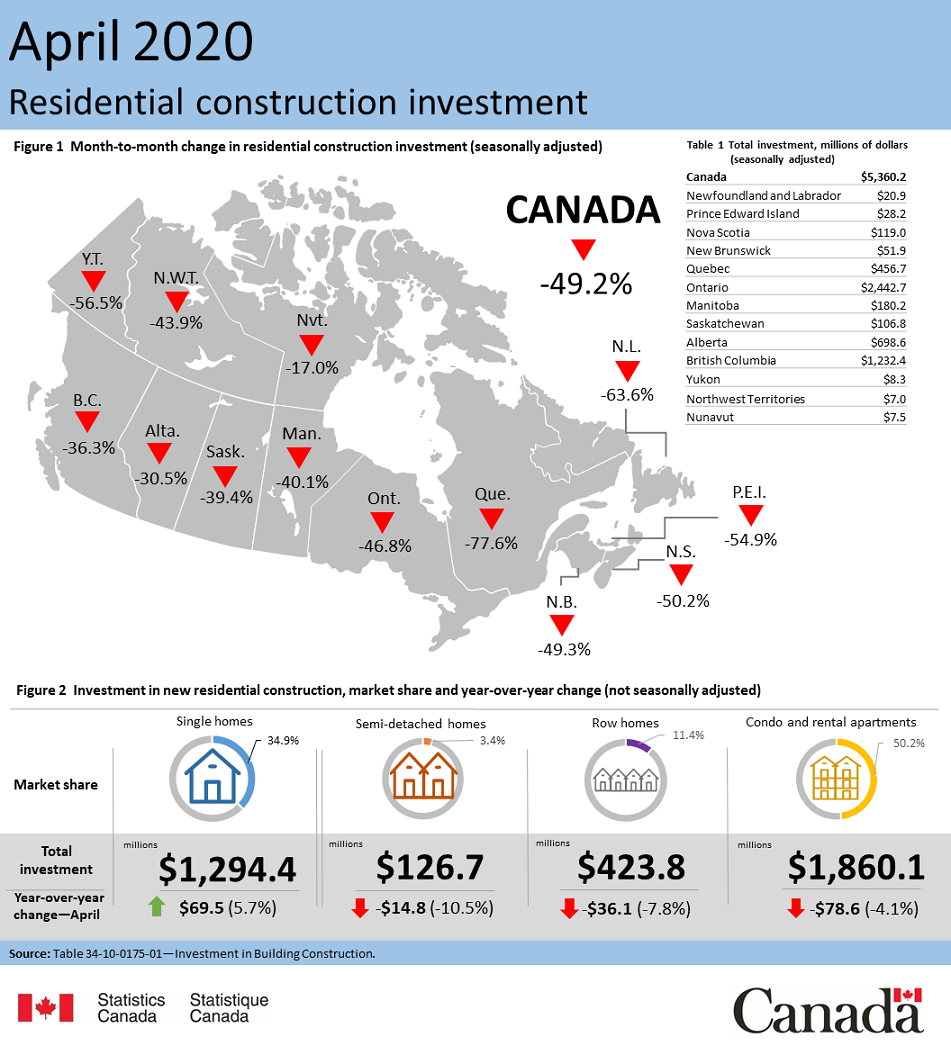 Investment in the non-residential sector plummeted 38.8% to $3.0 billion in April compared with the previous month. During this time, non-residential construction was largely shut down in Ontario and Quebec, while other provinces and territories allowed work to continue with strict public health measures in place. As a result, five provinces—including Manitoba (+1.6%), Saskatchewan (+1.3%) and British Columbia (+0.9%)—posted modest gains for the sector. British Columbia’s increase in April followed five consecutive monthly declines.

The commercial component posted the largest decline (-49.4%), with notable decreases in Ontario (-$905.3 million) and Quebec (-$522.8 million). Saskatchewan, Nova Scotia and British Columbia were the only provinces to post gains for this component. 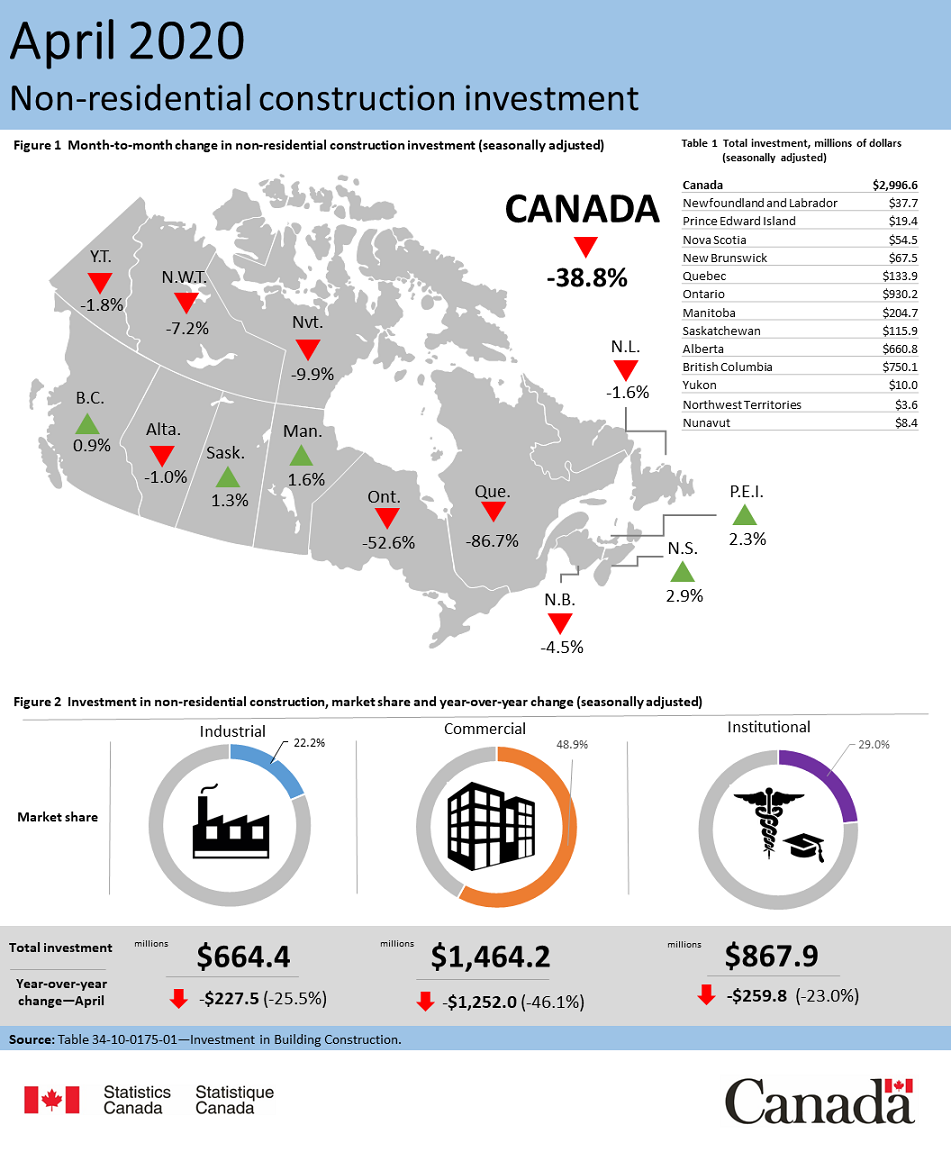 Statistics Canada notes in the release, that based on the extraordinary events and business disruptions around COVID-19, Statistics Canada has made adjustments to the models used to estimate investment in building construction. As a result of these adjustments, there may be larger than normal revisions to the data in subsequent months.

Monthly estimates for constant dollars are calculated using quarterly deflators from the Building Construction Price Index (18-10-0135-01). Typically, the first two months of a quarter use the previous quarters’ price level and are revised when the new quarterly price index becomes available.

Detailed data on investment activity by type of building and type of work are now available in the unadjusted current dollar series.