The Canadian real estate market experienced an inflection point in 2020 that will set a new course for years to come, according to the report. Against the backdrop of a once-in-a-century global pandemic, Canada’s economy contracted by -5.5 per cent, leaving certain sectors scarred and others better positioned than ever before. 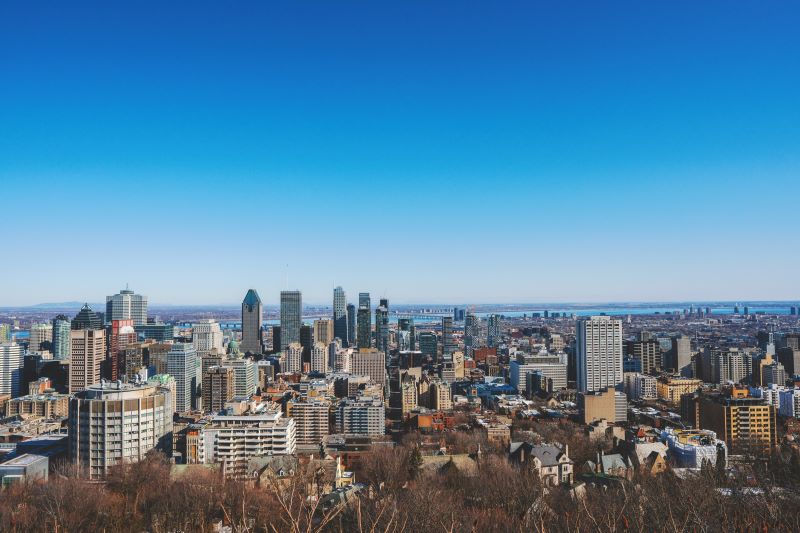 Owners of industrial buildings and rental apartments delivered strong returns and saw little fall-off in rent collection. Investors also flocked to development land, choosing to circumvent the uncertainty of COVID and focus on the 2-5-year development horizon when market conditions will likely be better. Eighty per cent of land sales in 2020 were intended for industrial and multifamily use.

The report states that data centres, responsible for providing the bandwidth needed to make Zoom calls and remote schooling possible, are a small but fast-growing asset class in Canada. Underscoring this sector’s potential, US-based Equinix acquired a portfolio of Bell Canada data centres valued at over $1 billion.

“High-touch” sectors like office, retail, seniors housing and hotels were a different story. Capital flows have been stalled mainly because tenants are still working out their occupancy plans and owners are waiting for clarity before transacting. While we expect these sectors to rebound as COVID vaccinations are rolled out, they are undergoing a profound shift in how people are using and interacting with them.

Despite the uncertainty, investor appetite is very strong.  Institutional allocations to real estate are on the rise thanks to low interest rates and soaring stock valuations. Global real estate dry powder (i.e. committed but unspent capital) is close to record levels. With institutional investors like pension funds and private equity groups mostly looking to sell, private investors took advantage, accounting for over 50 per cent of investment volume.

Thanks to government stimulus, distressed sales have been rare, amounting to just CAD $800m in 2020, or about 2 per cent of the total market.  On the core end of the spectrum, sellers are reluctant to let go of stable assets in a downturn. This could change over the course of 2021.

In 2020, there were approximately $11.8b in total commercial investment sales in the GTA. Private capital continued to take market share from institutional investors, accounting for 53 per cent of all liquidity.

Development land was the most heavily traded asset, accounting for $3.6b, while multifamily ($2.2b) and industrial ($2.1b) followed. About $1.6b of land deals are zoned for multifamily residential, suggesting that the true liquidity in the multifamily sector is much higher – not surprising given the continued undersupply in the housing market.

Total investment sales in the Greater Montreal Area (GMA) reached $6.1 billion in 2020.  While this represents a 30 per cent fall from 2019 – which was a record year – it remains 15per cent above the market’s five-year average. This suggests that Montreal has remained an extremely fluid and liquid market despite the difficult circumstances of the past year.

Vancouver saw nearly $5.75b in total investment sales in 2020 – a 9 per cent fall from 2019 and a 35 per cent fall from the market’s five-year average. The most dynamic segment of the market this past year has been development land, which accounted for $2.4b, or 45 per cent of total investment volume. Multifamily ($980m) and industrial ($883m) follow, however nearly 60 per cent of development land sold in 2020 was intended for either multifamily or industrial use, bringing the “true” share of multifamily and industrial sales to about 75 per cent of market volume.

Overall investment volumes in Calgary reached $1.4b during 2020. Industrial ($381m) and land ($242m) led the way, reflecting the optimistic outlook for stabilized and ground-up industrial development, especially in the Southeast submarket. 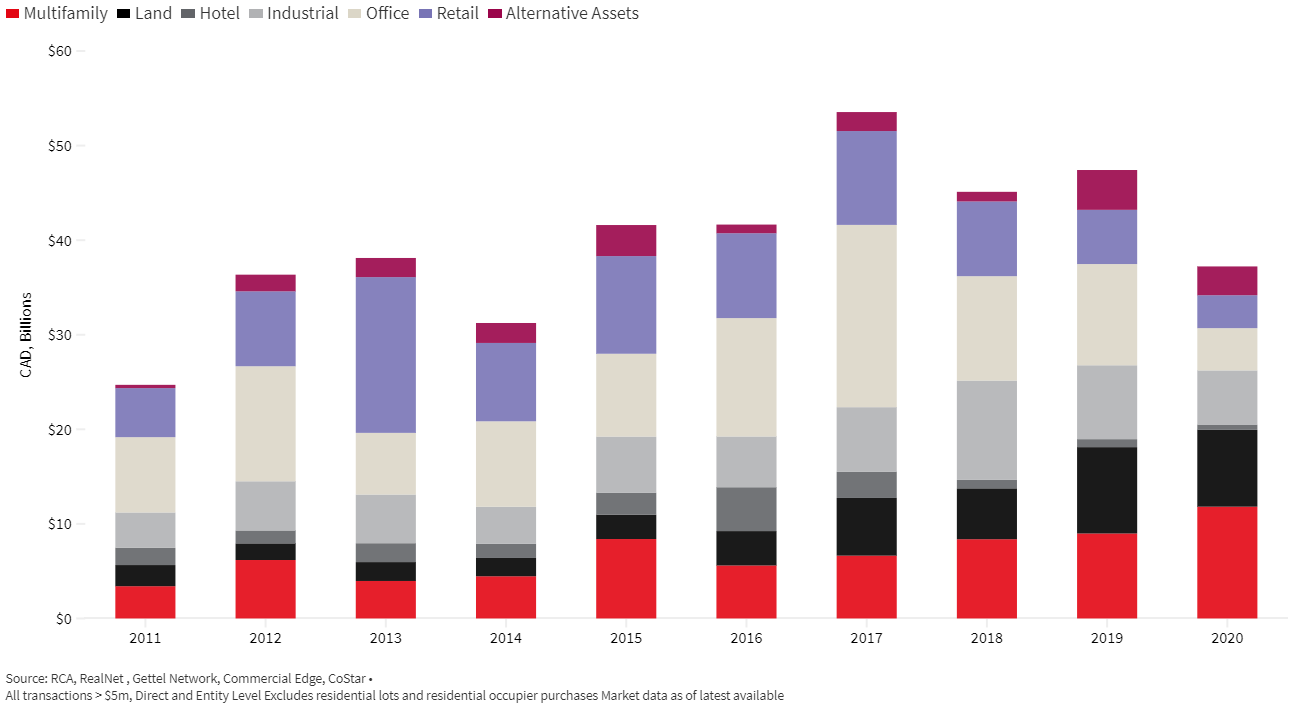 The overall buyer pool was split fairly evenly with private groups, REITs, and fund managers each accounting for around 25 per cent of total liquidity. On the sell side, about 23 per cent of total transactional volume was attributed to user sales, reflecting the many companies that resorted to sale-leaseback transactions to generate cash flow.  Vendor financing is often required to complete transactions.

Edmonton saw about $1.5b in total investment sales in 2020, down nearly 30 per cent from the city’s five-year average. The multifamily sector was the clear winner, contributing $530m – equal to about 35 per cent of the total investment market.  Private groups and REITs dominated the buyer pool, combining for 93 per cent of total liquidity.

The buyer pool was mostly made up of private investors, who accounted for 53 per cent of liquidity, and fund managers who accounted for about 31 per cent.  Users were active on the sell side, suggesting that the pandemic led to some sale-leaseback deals.  Multifamily ($562m) and office ($375m) were the highest grossing sectors in 2020.