Canadians didn’t let COVID-19 or a lack of housing supply stop them from flocking to the real estate market in January as they snatched up a record number of homes and shelled out more than they had in previous years.

The Canadian Real Estate Association said Tuesday that January sales were up 35.2 per cent compared with a year earlier and up two per cent when compared to December.

The increase came as the national sales-to-new listings ratio rose to 90.7 per cent — the highest level on record. The previous monthly record was 81.5 per cent set 19 years ago.

The actual national average price of a home sold also soared to a record $621,525 in January, up 22.8 per cent from the same month last year.

CREA said market conditions were pushed to record levels in January because people have held off putting their homes up for sale in the middle of the pandemic, leaving fewer options for people to fight over.

“The buyers and sellers that will in time define the Canadian housing story of 2021 are mostly all still waiting in the wings,” Shaun Cathcart, CREA’s senior economist, said in a statement.

However, Cathcart believes the market is unlikely to see a rush of listings until the public heath situation improves and the dreary winter weather subsides.

“Canada has only 1.9 months of housing inventory available — the lowest reading for this measure of home supply on record”

“The ratio of sales to new listings, a measure of a market’s tightness, rose to 91%, smashing records” https://t.co/hSQ9wserVX pic.twitter.com/T3XKVbMdJf

“The best case scenario would be if we see a lot of sellers who were gun-shy to engage in the market last year making a move this year,” he said.

“A big surge in supply is what so many markets really need this year to get people into the homes they want, and to keep prices from accelerating any more than they already are.”

CREA found the Greater Vancouver and the Greater Toronto Area, two of the country’s most active and expensive markets, were heating up very quickly in January.

The average seasonally adjusted price of a home in the GTA was $941,100 and in Vancouver, was just over $1 million.

When the associated removed data from both those regions from the $621,525 national price average, it found the average price was slashed by $129,000.

But that doesn’t mean that conditions eased up outside the city centres, said Wins Lai, a Toronto real estate broker.

Prices in areas like Vaughan and Markham, Ont., have reached levels she is shocked by.

“Outside of the city in somewhere like Barrie, we are seeing 40 offers on something that’s $750,000 which is insane,” she said.

Flash back in Q4 2016-Q1 2017 in Ontario, last time prices were really ripping. Average months of inventory in resale market was 1.8 over that time. Average inventory, seasonally adjusted, was ~37k.

Today, MOI in Ontario is 0.9 and inventory is just over 20k. 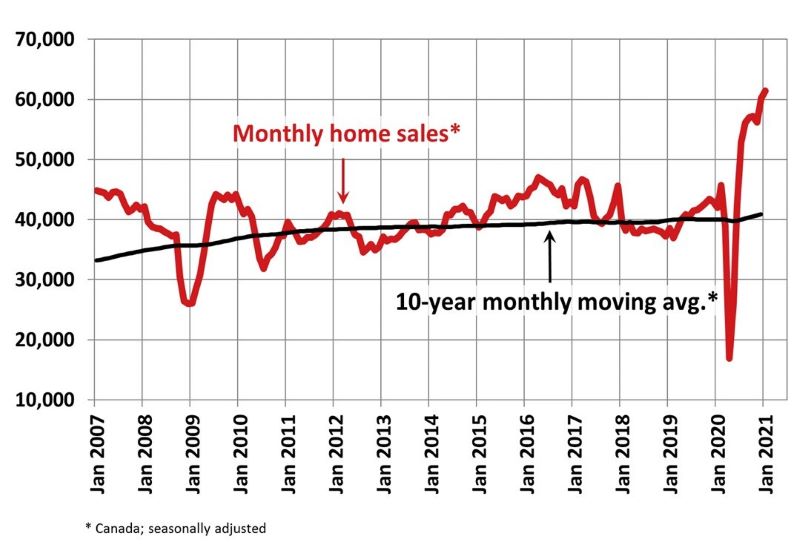 However, the largest year-over-year gains — above 30 per cent — were recorded in the Lakelands region of Ontario cottage country, Northumberland Hills, Quinte, Tillsonburg District and Woodstock-Ingersoll.

Urban sprawl and the pandemic are responsible for part of this phenomenon, Lai said.

“People want to be outside of the city, they want to have their own homes and they don’t want to be in elevators.” she said.

While the downtown core may be less attractive because many people are working from home, young professionals and couples are still trying to snatch up homes there and bidding wars on condos are plentiful.

CREA said January price gains were in the 10 to15 per cent range in the GTA, Mississauga, Chilliwack, B.C., B.C.’s Okanagan Valley, Winnipeg and on Vancouver Island.

They rose by as much as 10 per cent in Victoria, Greater Vancouver, Regina and Saskatoon and by about 2 per cent in Calgary and Edmonton.

This report by The Canadian Press was first published Feb. 16, 2021.