Calgary’s East Village master plan takes another step forward today with the groundbreaking of one of East Village’s prime riverfront development parcels. Immediately east of the historic Simmons Building – the innovative mixed-use project will bring retail space to the ground level with unique office space and residential above.

The riverfront parcel, known as M2, is small in size, measuring only a quarter acre (10,872 square feet), but big on impact with a prominent location along the Jack and Jean Leslie RiverWalk + Plaza and with unobstructed views of the beautiful Bow River. The project is being led by Calgary Municipal Land Corporation’s (CMLC) first female developer, Kate MacGregor, president of Calgary’s XYC Design + Development — an entrepreneurial local developer combining expertise in architecture and engineering for a multidisciplinary approach. 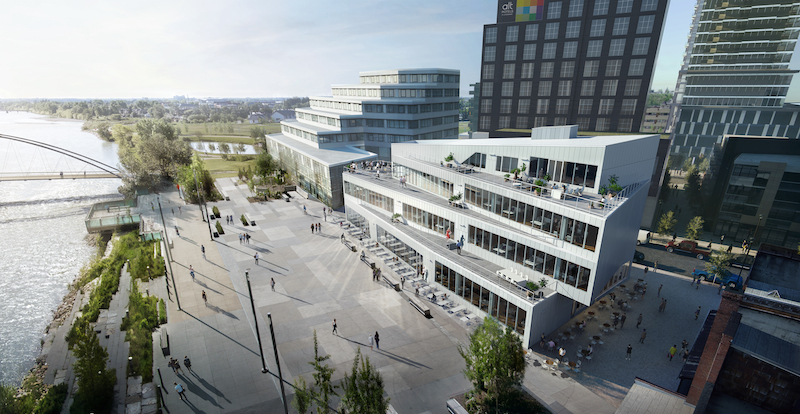 “One of the primary goals of the East Village master plan was always to re-establish the riverfront and allow the community to enjoy the beautiful Bow River, so we are thrilled construction is now starting on this exciting project,” says Michael Brown, president and CEO, CMLC. “Since we first partnered with XYC in 2014, we knew we had the right team with the right vision that aligned with our retail vision for the community.”

When completed in 2019, the four-storey building will have a total of approximately 7,500 square feet of restaurant space on the main floor, with more than 2,500 additional square feet of riverfront patio spilling out onto RiverWalk Plaza. The upper two floors of boutique office space bring another 12,500 square feet, and a unique 3-bedroom penthouse live/work unit perches on the top floor, overlooking the Bow River and St. Patrick’s Island.

The building was designed by Brooklyn-based nARCHITECTS, where MacGregor was employed from 2014-2016. “The design of the building was really inspired by the challenges of working within such a small, constrained site,” says Kate MacGregor, president of XYC Design + Development. “The undulating north façade of the building minimizes shadows along the riverfront and, as each level subtly recedes from RiverWalk, results in a series of spectacular terraces with panoramic views of the Bow River.” 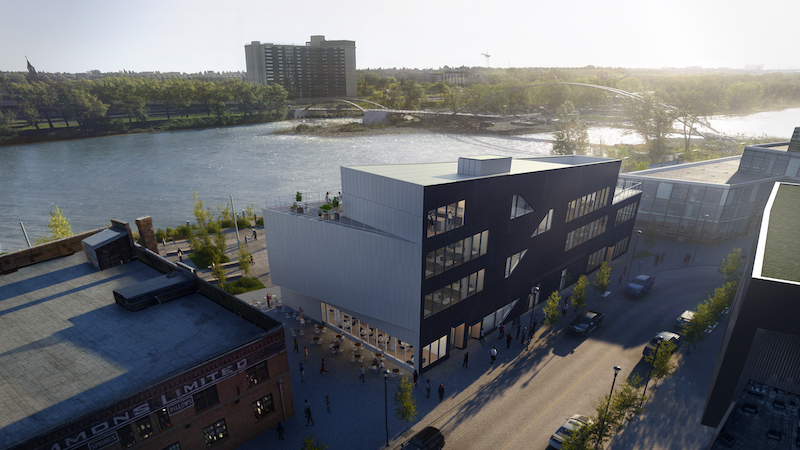 MacGregor is a contemporary designer who has worked for and studied with some of the top architects in New York City. She completed a degree in Civil Engineering at the University of Calgary and a Masters in Architecture at Columbia University in Manhattan. Kate is pleased to bring her technical and creative skills, along with her passion for design and urban living, back to her hometown of Calgary.

“Kate’s vision and team is testament to the growing influence of women in Calgary’s development industry,” adds Michael Brown. “Our own team at CMLC not only has very strong female leadership but 16 of our 20 staff are female which is uncommon in this industry but easily one of our core strengths as a successful development company.”

With construction underway, XYC will now focus on selecting the right tenants to activate the main floor restaurant spaces. “We want to attract tenants whose vision not only aligns with the building’s design but amplifies and compliments the neighbouring Simmons building in creating a one-of-kind dining destination,” says MacGregor. “It is an unparalleled opportunity to be along the Bow River. On one side, this is going to be the best patio in the city, while on the other, you’re in East Village’s urban village, right next to downtown. We want partners who share our excitement and vision.”