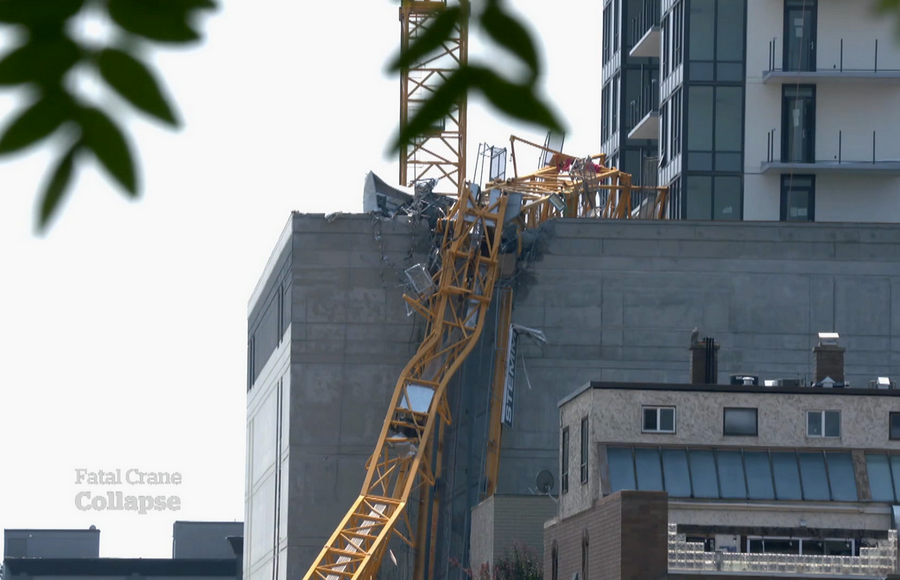 KELOWNA, B.C. – The head of a development company building a 25-storey residential tower says there were “multiple” fatalities after a crane collapsed in Kelowna, B.C., on Monday.

Jonathan Friesen of the Mission Group said he didn’t know what caused the crane to fall and that workers who died were subtrades on the building.

“They were on our site and as a result of their work they did lose their lives,” Friesen told a news conference Monday.

“Our corporate priority is, of course, for the safety of all of our workers and we want them to go home at the end of the day, healthy and safe. And that did not happen today.”

Friesen said construction will continue after an investigation by WorkSafeBC and that the RCMP would release details on the number of people who died. The coroners service is also investigating.

“Our Mission whole team, Mission staff, and all of our subtrades are in a state of shock,” he said, adding grief counselling has been offered to anyone who needs it.

#Breaking RCMP evacuating area near Bernard Avenue and Bertram Street in downtown #Kelowna after a crane collapsed. No confirmation of injuries but police are calling it a “significant incident” with an industrial crane. @GlobalOkanagan (video: Jeff Martin) pic.twitter.com/7bLp9g0V7P

A crane collapsed at a construction site in downtown Kelowna in British Columbia, Canada on Monday, sending multiple people to the hospital. Residents in the area were evacuated for safety. pic.twitter.com/69eM2Tx4EN

A woman describes the frantic phone call from her son, who was working at the downtown Kelowna construction site where a crane collapsed this morning. pic.twitter.com/gNIu96ozpE

Kelowna emergency crews responding to St. Paul and Bernard construction site where a crane has collapsed onto a nearby building. @KelownaCapNews pic.twitter.com/4jGGSckwd2

The RCMP said they responded to the collapse, which knocked out power for most of the city’s downtown core and forced an evacuation of the surrounding area.

An email from the Kelowna RCMP said there were “multiple casualties,” but police would not confirm any numbers or provide any further details.

BC Emergency Health Services said it took three patients to hospital. It said one person was in critical condition, another was seriously hurt and the third person had minor injuries.

Kellie Orsted and her boss, lawyer Chris Fraser, were working in the building next to the construction site when the crane smashed into their ground-floor offices.

“It was like an explosion,” Orsted said. The outside wall behind her desk caved in, pushing her office chair across part of the room, she said.

Orsted said she ran into Fraser’s office and could only see rubble.

Squinting through the heavy dust, Orsted said she saw her boss with his head down and thought he might be dead.

“Then he moved. I helped pull the rubble off him and we got out of there as quick as we could,” she said.

Fraser said when he heard a loud crash, he immediately dove under his desk for protection.

The wall and part of the roof above him caved in, he said.

“It was hard to see, there was so much dust,” he said.

Labour Minister Harry Bains issued a statement saying he was “deeply saddened to hear about this terrible incident.”

“All workers have the right to a safe and healthy workplace _ even one injury or death is too many. This is a heartbreaking reminder that we must strive to ensure the safety of all workers to prevent incidents like this from happening.”

The crane was being used to build a residential tower. The upper portion of the crane toppled, leaving most of the crane’s support tower standing.

The City of Kelowna declared a local state of emergency on Monday. In a news release, the Central Okanagan Emergency Operations Centre said the construction site and the surrounding area remain unstable and unsafe.

– With files from Alistair Waters in Kelowna, B.C.

This report by The Canadian Press was first published July 12, 2021.

Prime Minister announces $1.3B for SkyTrain spur in Surrey and Langley, B.C.