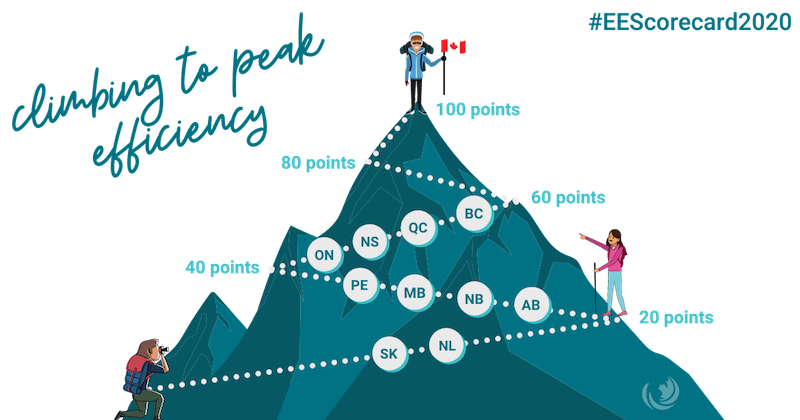 The Scorecard found that when it comes to energy-saving policies, British Columbia is first, Saskatchewan is last, Prince Edward Island is most improved, and the federal government needs to help all provinces ramp up to meet national goals.

Energy efficiency has become a go-to solution to recover from COVID-19’s social and economic impacts in a way that promotes clean energy and long-term resilience. In 2020, the federal government committed to improving average energy intensity by three percent per year, which is a tripling from current levels.

Organizations such as the International Energy Agency and Canada’s Task Force for a Resilient Recovery recommend investing in building retrofits because they create jobs, promote spending in local economies, and spur productive local investments.

“Most energy saving policies are implemented by the provinces, because they control areas such as public utility regulation and building codes. The Scorecard tracks provincial performance and policy initiatives, while aiming to spur healthy competition amongst policymakers,” said the report’s lead author, James Gaede.

The Scorecard gave the top rank to British Columbia for the second year. The province is ahead in net-zero energy-ready building codes, electric vehicle registrations, industrial energy management systems, and low-carbon heating.

Prince Edward Island was the most improved province, and narrowly took the lead away from Nova Scotia in the report’s assessment of energy efficiency programs. P.E.I. is now top in per capita program spending, with a strong emphasis on low-income and Indigenous communities.

Quebec is second place and leads in the transportation category. This year, the province made its first update to energy efficiency standards for large buildings since 1983. The province unveiled an ambitious 2030 plan for a green economy.

Saskatchewan is in last place, lagging in energy efficiency program savings and spending.

Alberta and Ontario both saw a significant drop in scores compared to the previous year. Alberta significantly reduced program savings and totally shut down the Energy Efficiency Alberta agency. Ontario is a traditional leader and ranks fourth overall, yet is slipping in areas such as electricity savings and electric vehicle registrations.

“The reduction in program budgets and savings in Ontario and Alberta have a significant national impact. If these trends continue, national efficiency and emission reduction goals could be out of reach,” said Dr. Gaede.

All provinces have significant room to improve. On a scale with 100 available points, the highest score this year is 58 and the lowest 17.

The 2020 Scorecard noted that Ontario is a traditional leader in areas such as energy efficient building codes, appliance and equipment standards, building energy reporting, and conservation programs, however, the 2020 Scorecard registered steep reductions in electricity savings and program spending.

According to the Scorecard, Ontario ranks fourth in natural gas and fossil fuel energy savings. In 2018, Ontario saved 0.4 per cent of energy demand. While in 2019 Quebec and PEI saved 0.9% and Nova Scotia saved 0.5 per cent.