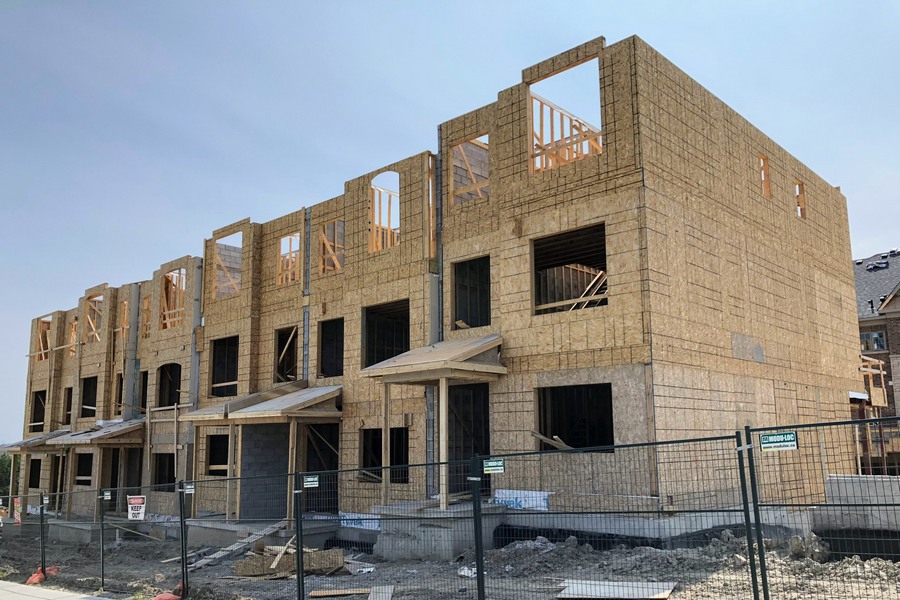 TORONTO – Ontario introduced legislation Wednesday to streamline approval processes in a bid to boost the province’s housing supply but the bill lacked key measures advocates and experts have long urged – something the housing minister blamed on municipalities.

The legislation contains measures to speed up the greenlighting of subdivisions, site plans – which deal with elements such as walkways and parking – and modular multi-unit residential buildings.

But it does not address many of the 55 recommendations issued last month by a government-convened housing affordability task force, including changing municipal zoning rules to allow more housing to be built aside from single-family homes.

Municipal Affairs and Housing Minister Steve Clark said that’s because municipalities have said they are not ready to implement the report’s “ambitious” policies right away.

“There’s much more to do and if we’re going to get the numbers that the housing task force talks about, we’ve got to have municipalities not work against us, they’ve got to work with us,” he said at a press conference.

“All you have to do is look at a council agenda and see resolutions from local councils against the task force report. I couldn’t bust forward with … all the recommendations when municipalities are so adamantly opposed. I have to get them onside.”

To do so, the government is launching another round of 10 new consultations and is establishing a housing supply working group with municipal and federal governments, as well as other stakeholders.

The consultations will touch on increasing “missing middle” housing including supports for multigenerational housing, access to financing for not-for-profit developers and the housing needs of rural and northern communities.

“Saying that they can’t do anything because municipalities are going to resist, it just rings so hollow,” she said.

I introduced More Homes for Everyone, the next part of our plan to implement the Task Force report with a housing supply action plan every year over 4 years.

As a first step, we’re consulting on the multi-generational community to deliver gentle density.https://t.co/7ht1ArzHjx

The task force’s report will form the basis of the government’s long-term strategy, said Clark, while acknowledging that Ontario’s election campaign is a few short weeks away.

“This is not a one-and-done scenario,” he said. “The task force is our long-term road map for the future and we’re going to put a plan in place moving forward after June 2, to make sure we get this done.”

The task force’s recommendations included a goal of building 1.5 million homes in 10 years to address the province’s housing crisis.

Clark touted progress made since the governing Progressive Conservatives introduced a housing bill in 2019, saying there were more than 100,000 housing starts in 2021, the highest level since 1987, but he noted that many municipalities have stymied zoning changes contained in that law.

House prices in Ontario have nearly tripled in the last 10 years, far outpacing income growth, the task force report said, but the province is 1.2 million homes _ both rental and owned _ short of the G7 average.

About half of the regions in Ontario had housing price growth of more than 35 per cent, year over year to February, according to data from the Canadian Real Estate Association. Five regions – Sault Ste. Marie, Brantford, Bancroft, Cambridge and Renfrew – saw growth of more than 45 per cent.

In the Greater Toronto Area, the average price of a detached home hit more than $1.7 million last month, with semi-detached properties at $1.3 million, townhouses at $1.1 million and condos nearing $800,000.

Ontario announced Tuesday an increase to a tax on non-resident homebuyers from 15 to 20 per cent and an extension of it to the entire province instead of just the Greater Golden Horseshoe. Those changes took effect Wednesday.

Under Wednesday’s legislation, municipalities would also have to refund zoning bylaw amendment fees after Jan. 1, 2023, if they don’t make a decision on rezoning requests within legislated timelines. The province is also putting $19 million over three years toward reducing backlogs at the Ontario Land Tribunal and Landlord and Tenant Board.

The legislation also contains a rebrand of sorts for Minister’s Zoning Orders, a tool to override local zoning bylaws and fast-track development. It introduces the Community Infrastructure and Housing Accelerator, which Clark said responds to auditor general recommendations to provide more structure and to criticism about public consultation.

MZOs were originally intended to be issued in special circumstances, but the government is using them as a tool to overcome potential barriers and delays to development, the auditor said, and there was no set criteria the minister uses to decide when to use one.

Today, the ON Govt. released new housing legislation, the More Homes for Everyone Act which acts on several of the province’s Housing Affordability Task Force recos. OREA CEO @timhudak helped drive many of the key policy changes featured in the bill today. https://t.co/lX6LbrVaun pic.twitter.com/IRuUUQCilw

The Ontario Real Estate Association said more can be done, but the legislation is a great step.

The Association of Municipalities of Ontario agreed, saying in a statement that there must be a larger process to address the housing crisis.

“AMO and municipal governments look forward to being actively involved in the dynamic, long-term work needed to address all aspects of the housing challenges ahead,” AMO president Jamie McGarvey said.

Many of the housing task force report’s recommendations suggested ways to limit how development can be stifled by local opposition to neighbourhood growth and change.

Those recommendations included eliminating municipal policies that prioritize preserving “neighbourhood character,” exempting projects of 10 units or fewer from public consultation when they only need minor variances, limiting municipalities from hosting consultations beyond what is required in the Planning Act, and banning heritage designations that are made only after a development application is filed.

Municipal zoning rules also need to be changed to allow more homes to be built, the report said. It’s estimated that 70 per cent of the residential land in Toronto is restricted to single-detached or semi-detached homes.

The province allowed secondary suites starting in 2019, but municipalities are still restricting their use – the total number of secondary suites has actually declined for the past three years, the report said.

Today, the provincial government released new legislation that aims to increase housing supply and choice for families and individuals alike in communities big and small across our province. ?️ #onpoli