The Ontario government has announced that, it is “launching a world-wide search to find a private sector partner, or partners, with the best, most remarkable concepts to transform Ontario Place into the world-class destination it was always intended to be.”

Michael Tibollo, Minister of Tourism, Culture and Sport, was joined by Monte McNaughton, Minister of Infrastructure, at Ontario Place to make the announcement during a news conference at the site’s Cinesphere theatre.

“Our government promised to move quickly to bring Ontario Place back to life and we are delivering on that promise,” said Tibollo. “We are inviting partners from around the world to submit their designs and ideas for a reimagined Ontario Place.”

According to the government, through a Call for Development, the province is encouraging interested parties to take a fresh look at this unique waterfront asset. The province is seeking transformational ideas that are financially viable from partner(s) who have the right experience and capacity to design, implement and operate their development on the site. Residential developments or casinos will not be considered.

The development guidelines do not, however, require the famous white Cinesphere cinema to be preserved.

The announcement comes in the midst of concerns from the architecture and heritage community that the site’s original pods and Cinesphere should be retained. Toronto’s City Council has directed staff to work with the Ontario government on a strategy for the future of Ontario Place and Exhibition Place that involves consultation with all stakeholders and focuses on the original goal for the two sites – that is, providing attractive settings for festivals and other events for all Ontarians.

Speaking alongside @ONPlace4All, @KGreenbergTO & @ChrisGloverMPP on the Province’s unilateral announcement on Ontario Place. I am deeply concerned with this move, that includes no public process or consultation. The City owns lands within Ontario Place. They must work with us. pic.twitter.com/IRlw2JkgoR

.@joe_cressy reiterates his call for the city to be at the table with the Province to discuss the future of Ontario Place. He believes handing over more than 150 acres of land to the private sector is doomed to fail. More tonight @CityNews pic.twitter.com/tlwi2WDNBT

“Infrastructure is more than bricks and mortar. It’s about the people who use it,” said Infrastructure Minister Monte McNaughton. “Today’s announcement puts us on a new, visionary path for Ontario Place that will benefit the people of our province and beyond. We are looking for big, bold ideas.”

This Call for Development follows the government’s invitation in January to interested parties to submit their ideas early. Submissions should be commercially feasible and reflect the province’s vision for the site as a spectacular destination that could include sport and entertainment landmarks, public spaces and parks, recreational facilities, as well as retail.

“The former government ignored this gem and let it deteriorate for far too long,” said Tibollo. “We have a real opportunity here to unlock the great potential of Ontario Place as a year-round, world-class destination that can attract visitors from Canada and abroad, as well as Ontarians.”

Tourism Toronto recently issued a ‘Tourism Test’ for Ontario Place – its six priorities from a tourism perspective that are essential for the redevelopment of the waterfront lands. The test aims to ensure that the tourism opportunity is a central consideration as development options for Ontario Place are evaluated.

According to Tourism Toronto, The Tourism Test comes at a time where tourism in Toronto is seeing record numbers with 44 million visitors and $9 billion in visitor spending annually.

“Ontario Place is clearly one of the most important opportunities in Toronto to create something truly new and compelling that will attract new visitors from around the world,” said Andrew Weir, Executive Vice President, Destination Development at Tourism Toronto. “The Government of Ontario has begun a process to seek ideas for Ontario Place’s future and we are bringing a tourism lens and expertise to that discussion.”

The “Tourism Test” consists of six fundamental elements that are key to delivering an exceptional visitor experience:

The redevelopment must result in a compelling new experience that compliments Toronto’s existing attractions and gives visitors a new reason to travel to the city. This is an opportunity to create a signature visual icon, recognized around the world that travellers must see for themselves.

Toronto is a destination with four distinct seasons, all with potential to appeal to visitors. Redevelopment must ensure the attractions and offerings are accessible and animated throughout the year, as well as weekends and weekdays, day and night.

Ontario Place is and must remain a waterfront destination, showcasing one of Toronto’s greatest tourism assets – Lake Ontario. New development and attractions must complement the waterfront setting and ensure ample public access to the parks and waterfront.

Ontario Place features unique examples of modernist architecture in the Cinesphere and pavilion pods. Tourism is built upon unique experiences and these iconic buildings must be preserved and integrated in the redevelopment.

Accessibility is vital to maximizing the visitor opportunity. For residents and visitors, redevelopment must include direct transit connectivity, parking, cycling infrastructure and also loading accommodations for shows and events.

The Ontario Place opportunity is intrinsically linked with the adjacent Exhibition Place, featuring major sport, conference and event venues. Redevelopment must be planned together with further development of Exhibition Place to maximize transit and infrastructure investment and create an exciting combined campus for events and experiences. 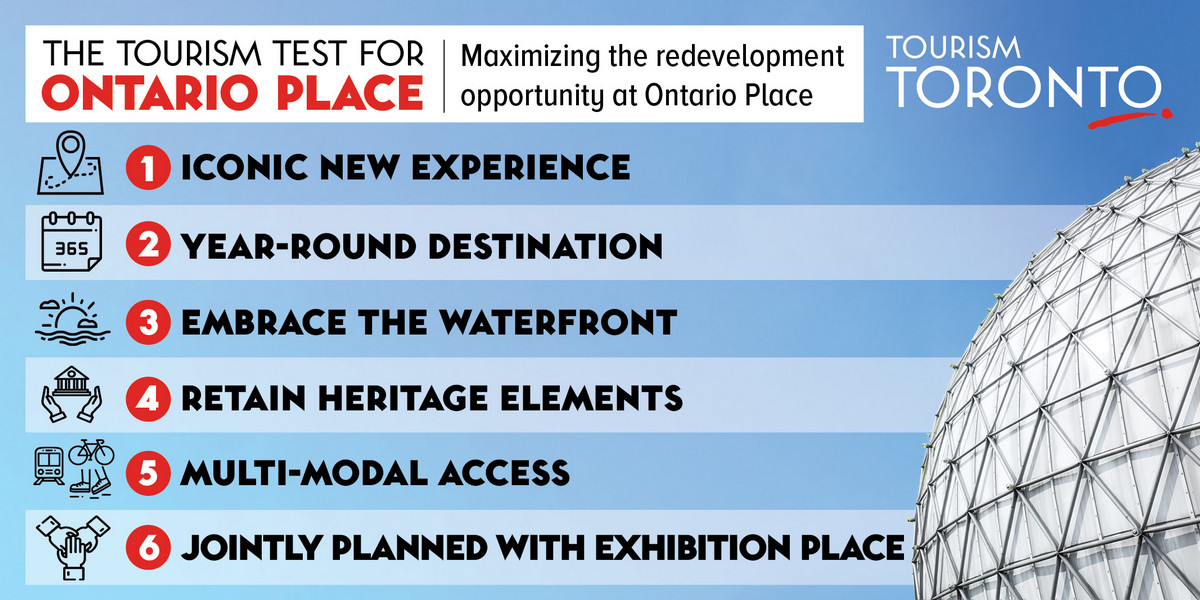 “For the new development to be not only viable but successful, it will need to tap into Toronto’s surging tourism market and the 44 million people that visit the city each year,” said Weir. “Tourism Toronto and the tourism business community are committed to working with the City, the Province and other stakeholders to realize an exciting new experience at Ontario Place and ultimately to invite travellers from around the world to come see it for themselves.”

Here is my statement on the provincial government’s Ontario Place announcement. pic.twitter.com/QT7PuITo8c

Community group Ontario Place for All, which is fighting to preserve public access to Ontario Place, said it is going to fight any attempt by the Ontario government to turn Ontario Place over to private business interests.

The group said the Development Proposal released today by the Minister of Tourism, Culture and Sport will allow developers to ban the public from any or all of the 155-acre waterfront park. It will also allow them to destroy significant heritage landmarks, such as the Cinesphere, the Pods and the recently-built Trillium Park. The only thing protected is the privately-run Budweiser Stage, said the group.

“If the government succeeds with this wholesale destruction of Ontario Place,” said Cynthia Wilkey, a member of the Ontario Place For All Steering committee, “Ontario Place could be turned into a gated entertainment community, accessible only to those who can afford to pay.”

“Not only is the government turning Ontario Place over to private business interests,” says Suzanne Kavanagh, another member of the Steering Committee, “but it is offering the developers a subsidy, by paying all the costs of soil remediation and the necessary utilities.”

Urban planner Ken Greenberg, says today’s announcement is a slap in the face for the City of  Toronto. “City Council unanimously approved a set of principles for the redevelopment of Ontario Place, that called for full community consultation, a recognition of the site’s Indigenous heritage, and it’s joint development with Exhibition Place. None of these are now going to happen.”

Interested parties are invited to visit OntarioPlaceDevelopment.com for more information on the opportunity and details on how to make a submission. Submissions are due September 3, 2019. Infrastructure Ontario has engaged KPMG and Colliers to market and promote this opportunity.

Hoping to see the iconic pods and Cinesphere retained? There are no limitations on their use or retention in the call. pic.twitter.com/KMDckmVYPR

In fact, and I will quote here: “There is no requirement for unrestricted public access. If necessary, access to all or portions of the Site can be controlled…”

1. Privatizing Ontario Place, Toronto’s downtown provincial park, would be a disastrous self-own. Any competent government would see the highest use of this space as parkland. https://t.co/tQ9LpT7trT

2. It’s a beautiful, interesting and well-located public place. The value of that to society — for tourism, investment, reputation — is huge. In a fast-growing city and region, even more so. @michaeltibollo #onpoli

3. The place should be planned together with the adjacent @ExPlaceTO (which the city has been ruining, BTW). It should remain public, and remain mostly open space. #onpoli #Topoli

4. @fordnation: Chicago is the greatest city in the world! Toronto should be more like that!
Chicago: Our central waterfront has a giant waterfront park!@fordnation: …. #Onpoli #OntarioPlaceforAll pic.twitter.com/qJySKXJ8p0

Today, I joined @joe_cressy and @ONPlace4All to respond to Doug Ford’s call for private partners to develop @OntarioPlace Ont. Place is not Ford’s private property. It belongs to the people of Ontario, and he must listen to what they want for our precious waterfront. #onpoli pic.twitter.com/tAJmkSyNVX

Wilkey says iconic pods and Cinesphere could be destroyed under m expressions of interest released by @fordnation govt. only Budweiser Stage is untouchable because of existing lease.

…@joe_cressy says “we’re not there yet” but wonders if private developers will want to bid on a project knowing they could face “years” of legal challenges over Ontario Place redevelopment. #onpoli #topoli