Ontario’s best Green Builders were celebrated on February 28th at the EnerQuality Awards Gala (EQ Awards), which took place at the Toronto Marriott in Markham, Ontario. More than 250 industry peers, including Markham Mayor Frank Scarpitti, gathered to recognize leaders in energy efficiency for their contributions and impact. 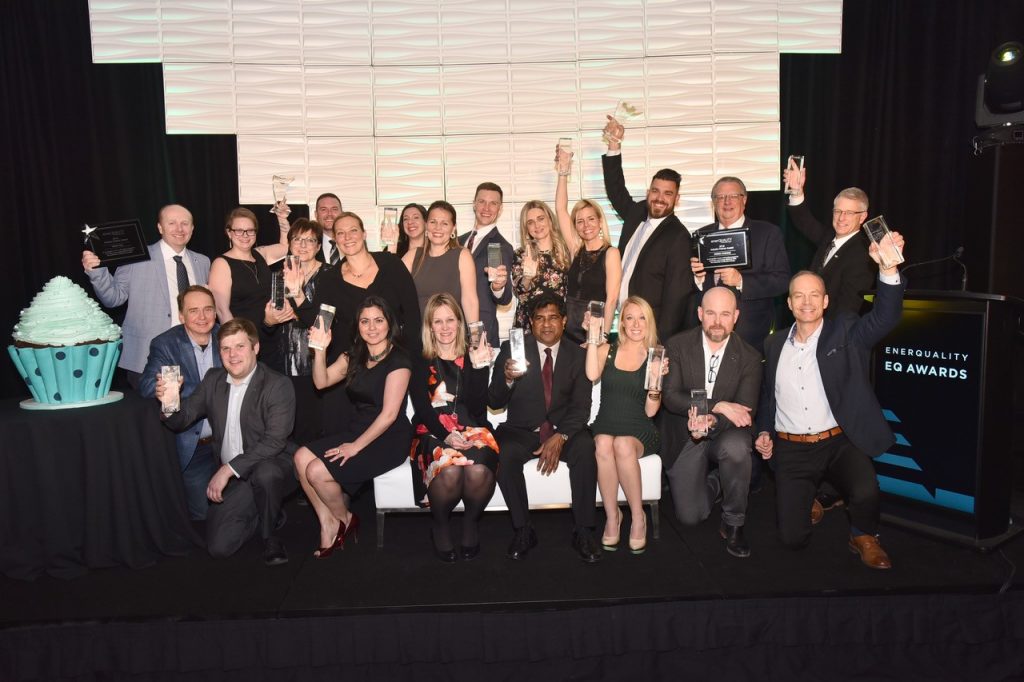 “It speaks volumes to see how the longevity of EnerQuality and our certifications like ENERGY STAR have continued to remain relevant and grow in impact over the years,” say Corey McBurney, President of EnerQuality. “The 2018 EQ Awards allowed the industry to celebrate where we have come from and spotlight the pioneers who are joining forces to carve a new path for the future with programs such as our ENERGY STAR Multifamily High Rise certification.”

“The People’s Choice Award was an amazing new addition to the Awards, allowing us to involve the greater community in both recognizing and selecting the winner,” says Shannon Bertuzzi, Vice President of Market Development at EnerQuality. “Our certifications are voluntary investments by our builders. EnerQuality is committed to ensuring the greater public is aware of the investment these builders are making for the sustainability of these communities.”

The EQ Awards were enjoyed by all and featured special designations to highlight the outstanding contributions of industry leaders including:

2018 Hall of Fame – Sean Mason, President of Sean Mason Homes:
EnerQuality is proud to announce Sean Mason as the 2018 Hall of Fame recipient. Sean has been a dedicated proponent of ENERGY STAR® for New Homes since the very first days. From 2002-2013, he encouraged green building and land initiatives at Mason Homes, when they were among the first three builders in Canada to participate in and certify with the then-new ENERGY STAR program, and the first in Canada to make ENERGY STAR their standard. Since he started Sean.ca in 2013, the company has won numerous awards, including BILD’s Green Builder of the Year in 2015, and EnerQuality’s ENERGY STAR Builder (Small Volume) in 2018. He has also been a finalist in BILD’s Places to Grow Project of the Year and People’s Choice Project of the Year, and BILD’s Best Low Rise Project (Built Category). At Sean.ca , ENERGY STAR is their standard offering, certifying 100% of their homes. Sean’s stamp has been on more than 1,000 ENERGY STAR homes in the last decade. “Sean.ca is about building modern, healthier and more affordable green homes in a sustainable community, allowing residents to connect with their neighbours in a meaningful way. The platform EnerQuality has provided with ENERGY STAR has allowed us to prove our commitment to our homeowners through a trusted third-party certifications” Sean Mason, President of Sean Mason Homes.

Impact Award 2018 – Tamarack Homes:
Tamarack Homes is honoured to receive the EnerQuality 2019 Impact Award for making significant long-term voluntary progress in reducing carbon emissions and showing outstanding achievements through energy efficiency and sustainable practices. From its beginnings more than 70 years ago, Tamarack Homes has strived for the highest quality in construction and customer service by pursuing materials and technology that would become industry standards. Thirteen years ago, with the launch of a brand-new Ottawa community called Jackson Trails, Tamarack certified its first ENERGY STAR home. Impressed with the results, Tamarack Homes committed the entire community to the new standard, a first for the entire region. Today, every home Tamarack builds carries the ENERGY STAR certification.

“We are pleased to be recognized for our dedication to sustainability in the home-building industry. The EnerQuality Impact Award symbolizes the commitment we make every day to prioritizing families, communities, and the environment.” says Chris Taggert, Vice President of Tamarack Homes.

It's a two-fer for Times Group! @enbridgegas Savings by Design's Commercial Award and the #EQAwards Building Innovation – Mid/High Rise! Awards presented by Mary Sye of Enbridge and @JoeOHBA (with a special guest appearance by Markham Mayor @frankscarpitti) pic.twitter.com/GTZw1Ko4ru

Leader of the Year at the #EQAwards went to the well-deserving Roya Khaleeli of @mintogroup! Award presented by Andy Goyda of @OwensCorning. pic.twitter.com/nT9u8M4Zz1

#EQAwards Net Zero Builder went to @RHHQualityHomes for the fourth year in a row! Award presented by Mark Rosen of @BEIncCanada! pic.twitter.com/Co5J4dcqrF

With more than 1,000 votes cast in the People's Choice Award for the #EQAwards, YOU awarded @acorn_dev the hardware! Award presented by EnerQuality's Jessika Diamond. pic.twitter.com/urKNE9nxG4

Ontario nowhere near goal of full accessibility by 2025, review finds

Study Finds BC Energy Step Code Could Deliver up to 1,700 jobs