VANCOUVER — The COVID-19 pandemic has prompted many Canadians to re-evaluate their housing and work arrangements, spurring some to think not big, but tiny. 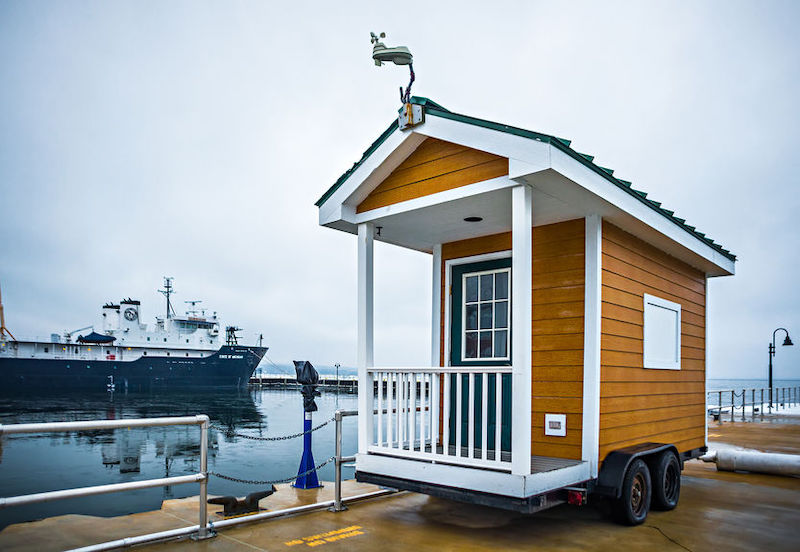 Pamela Robertson builds tiny homes in Gibsons on B.C.’s Sunshine Coast and said she couldn’t keep up with requests for quotes after the pandemic hit.

“Everybody wanted a tiny home that was built in stock and I build to order,” said Robertson, whose tiny homes on wheels are inspected to meet the Canadian Standards Association specifications for recreational vehicles.

While many people are dreaming of making the move, Robertson warns that building code requirements and regional rules can pose major hurdles.

“There are tiny houses on wheels out there and they’re all living under the fear that somebody is going to call them out.”

Like many jurisdictions, B.C. prohibits year-round living in RVs outside designated parks. Neither the provincial nor national building codes covers mobile homes and they present challenges related to lofts, ladders, small stairs and other features characteristic of tiny homes, she said.

Robertson said her company, Sunshine Tiny Homes, adheres as much as possible to the codes, as well as the international residential code that has specifications for tiny homes, in hopes Canada’s codes will one day differentiate tiny homes from RVs and other prefabricated houses.

She’s advocating for a pilot project that could see tiny homes on wheels temporarily permitted on property that’s already allowed a second dwelling, but the Sunshine Coast Regional District has yet to give the green light.

Robertson is also saving to build a tiny home of her own in the area that she said is hard-hit by low vacancy rates and high rental costs.

“It’s very dire here. It’s basically becoming unaffordable for people, for single people. So, tiny homes are definitely one of a multitude of solutions.”

The Canadian Home Builders’ Association joined calls for a friendlier regulatory landscape for tiny homes in 2017, requesting a number of changes to the national building code related to construction on a chassis or trailer, ceiling heights, stairs, escape windows and other features.

It can take years for code changes to be approved, if at all, said Bob Deeks, president of RDC Fine Homes in Whistler, B.C. He’s been a committee member with the homebuilders association and with Codes Canada, which is responsible for developing the national building code.

There’s a diversity of perspectives at the table, he said, noting the health-care sector advocates for changes, such as minimum stair dimensions, that could prevent injuries, but those changes could curtail smaller homes.

“That person living on the street? They don’t care what those stairs look like,” said Deeks.

“We’re going to design the very best housing that the world has to offer, but nobody can afford,” he added.

Elsewhere in B.C., Jessika Houston is preparing to move into her new tiny home on wheels in early February after it’s finished.

Houston, 42, had been thinking about tiny living and initially planned to rent after selling her four-bedroom house in Surrey.

When the pandemic hit and her rental circumstances changed, she said it was time to make the move to a more stable home that’s easier to maintain.

Houston said she went from working 60 hours a week and commuting two hours each day to starting her own business with more flexible hours and commissioning a tiny home from a Vancouver-based builder.

“My whole intention behind all of it is to be able to live a lifestyle that I can go and experience life instead of being stuck in the rat race and working 9 to 5 and coming home and cleaning on the weekends,” she said.

Like Robertson’s homes, Houston’s farmhouse-style tiny house is built to CSA standards for RVs. A bedroom on the main floor will boast a king-sized bed, she said, while a loft is accessible by stairs with built-in storage.

Houston found someone to lease her a spot to park her tiny home in the Lower Mainland, but she said others aren’t so fortunate, given bylaws that restrict living in a tiny home on wheels throughout the region.

“When you’re in the city, you have to worry about the neighbours and somebody reporting it,” she said. “Right now, the way the landscape is set up, you have to go out into the country so that nobody can see it.”

Houston bought her home outright, but financing is another major hurdle for many tiny-house hopefuls.

The company that’s building Houston’s home, Mint Tiny Homes, lists the price for a 6.7-metre home at $92,500, while larger models with more features and customizations can top $130,000.

“Pre-COVID, I was having some decent conversations with credit unions,” he said. “As soon as COVID hit, even they said, ‘Nope, don’t want to touch it.’

So, Ott looks for creative solutions for clients who can’t buy outright.

“I actually drive them to go talk to a Realtor and buy a piece of property. Even though it sounds like you’re spending more money, you’re actually able to finance it so you need less money down,” he said, noting banks are more likely to finance a home mortgaged in combination with the land.

Ott’s company was recently involved in the purchase of a mobile home park west of Toronto on the shores of Lake Huron.

The goal is to create a tiny home village of sorts, he said, where plots of land can be bought and sold like condo or strata title rather than leased.

While others push for building code changes, Ott said he’s most keen to see municipalities update their zoning and other bylaws to recognize growing interest in tiny homes as a solution to housing affordability woes.

Otherwise, said Robertson, “We’re restricting ourselves out of living.”

This report by The Canadian Press was first published Dec. 25, 2020.

This story was produced with the financial assistance of the Facebook and Canadian Press News Fellowship.