Every two years the Mies Crown Hall Americas Prize (MCHAP) of the Illinois Institute of Technology (IIT) College of Architecture is awarded to a built work in the Americas that best represents architectural excellence. The 2018 winner is Edificio E, an academic building in northern Peru that provides an element of sheltering softness in a harsh savannah and encourages intensive social interaction among students at the University of Piura. The selection was announced by 2018 MCHAP Jury Chair Ricky Burdett CBE. 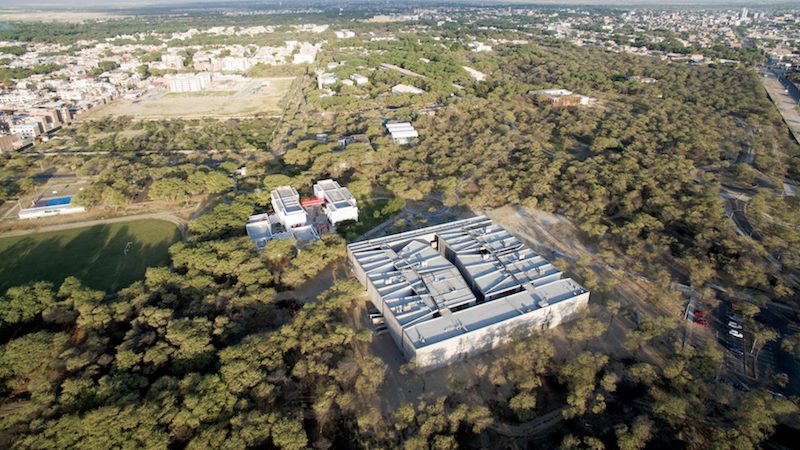 Sandra Barclay and Jean Pierre Crousse of the Lima-based Barclay & Crousse Architecture, the designers of Edificio E, will receive $50,000 in funding toward research and the development of a publication as well as the MCHAP Chair of Architecture at IIT.

The announcement concluded a benefit dinner held in IIT’s historic S. R. Crown Hall, a Ludwig Mies van der Rohe–designed landmark and MCHAP’s center of operations. The ceremony followed a day of dialogue between the six finalists and their clients, members of the award jury, and IIT students and faculty, including a public symposium focused on the current state of architecture in the Americas. The benefit dinner was co-chaired by founding MCHAP board member Helyn Goldenberg and Chicago-based philanthropist Michael N. Alper. 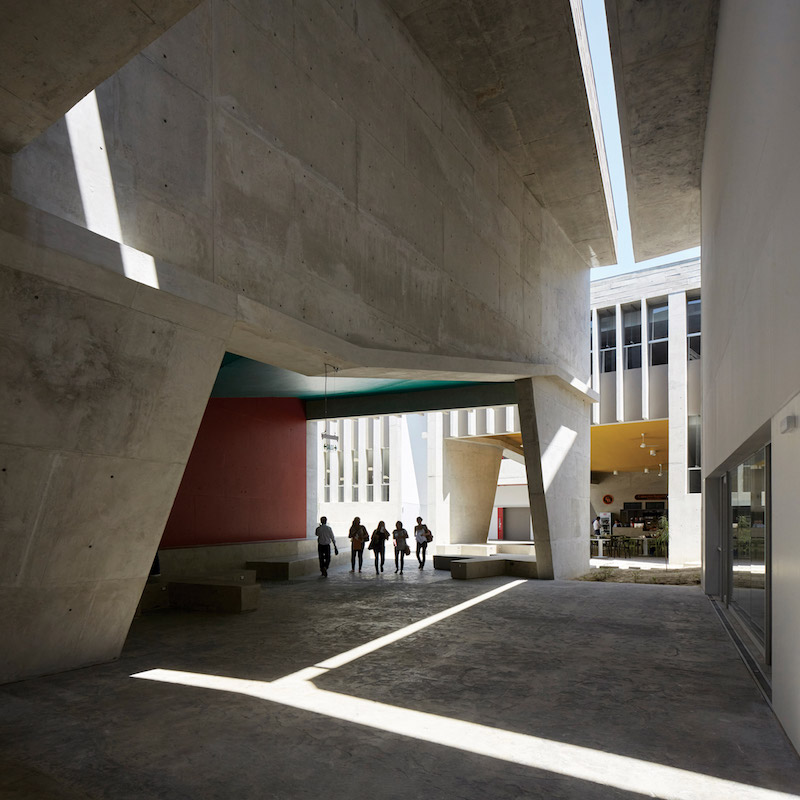 This year’s prize recognizes the best built project in the Americas completed between January 2016 and December 2017. MCHAP Director Dirk Denison remarks, “Though they come from diverse contexts and communities throughout the Americas, the finalist projects all share a legibility of intention and confidently deliver on their functional requirements, as any good building would. More importantly, however, they serve as outstanding precedents for students, architects and clients and offer catalytic examples of how building types might be rethought in our contemporary cities.”

Herzog & de Meuron’s 1111 Lincoln Road in Miami (2014); Álvaro Siza’s Iberê Camargo Foundation in Porto Alegre, Brazil (2014); and SANAA’s Grace Farms in New Canaan, CT (2016) are previous winners of the MCHAP Americas Prize. Rooted in an understanding of architecture as a practice of building, a tenet central to the identity of the IIT College of Architecture, the prize lauds a recently completed project that sets the highest creative standard for responding to the altered conditions defining our world today. 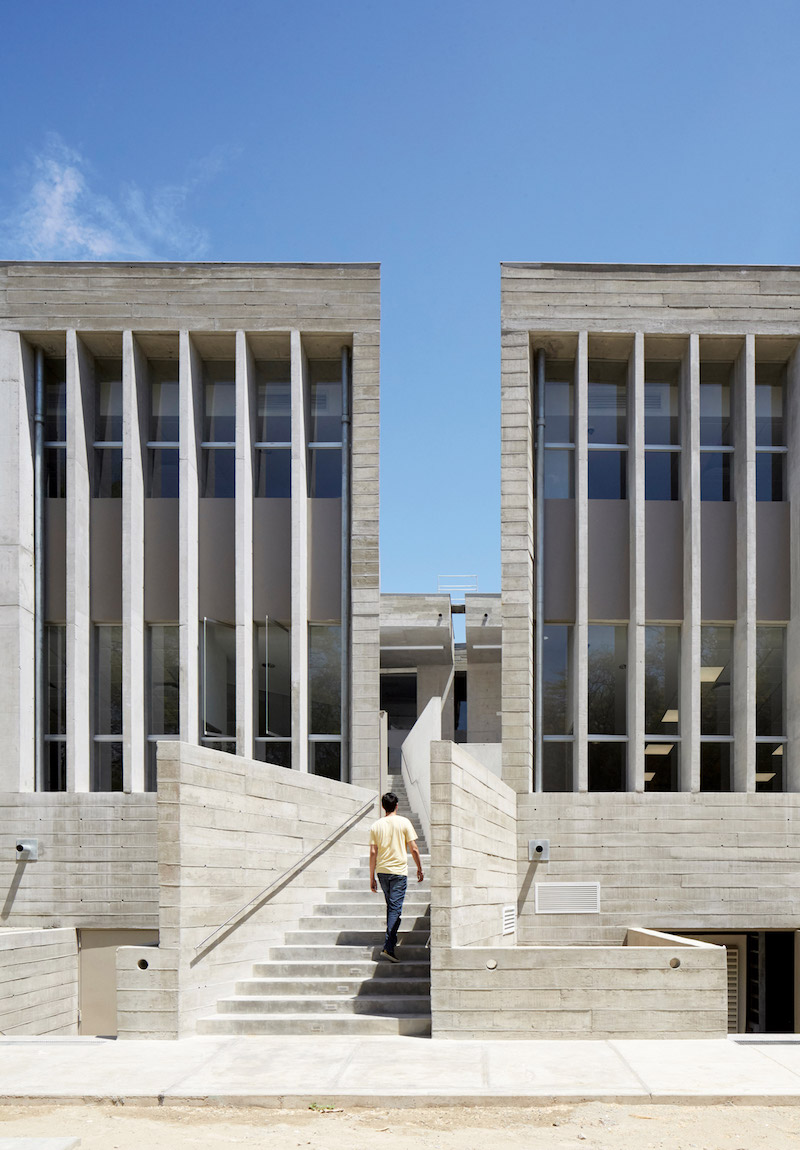 In articulating these standards, MCHAP also advances the city of Chicago’s legacy of architectural innovation. Of the prize, Rahm Emanuel, Mayor of Chicago, has stated, “Innovators flourish in Chicago and have created some of the world’s most memorable built structures—from the ‘first’ Chicago School of the late 19th century that invented the skyscraper to the ‘second’ Chicago School of the mid-20th century represented by IIT’s Mies van der Rohe. Chicago embraces new thinking and is proud to be the home of MCHAP, an award that honors today’s trailblazers from North and South America who are reimagining the modern city in the 21st century.”

Edificio E is an architectural work of extraordinary intelligence and sensitivity. Set in a dry forest more than 600 miles northwest of Lima, the building accommodates a growing student population, the result of a public grant promoting enrollment by disadvantaged rural students. The building is made up of a series of lecture halls and administrative offices arranged into a square; these 11 small structures are woven together by a network of interstitial, semi-exterior pathways and public spaces, creating informal areas for students to pause and interact with one another. Sandra Barclay and Jean Pierre Crousse describe the building as a “learning landscape,” a shaded, airy environment that encourages students to exchange ideas. 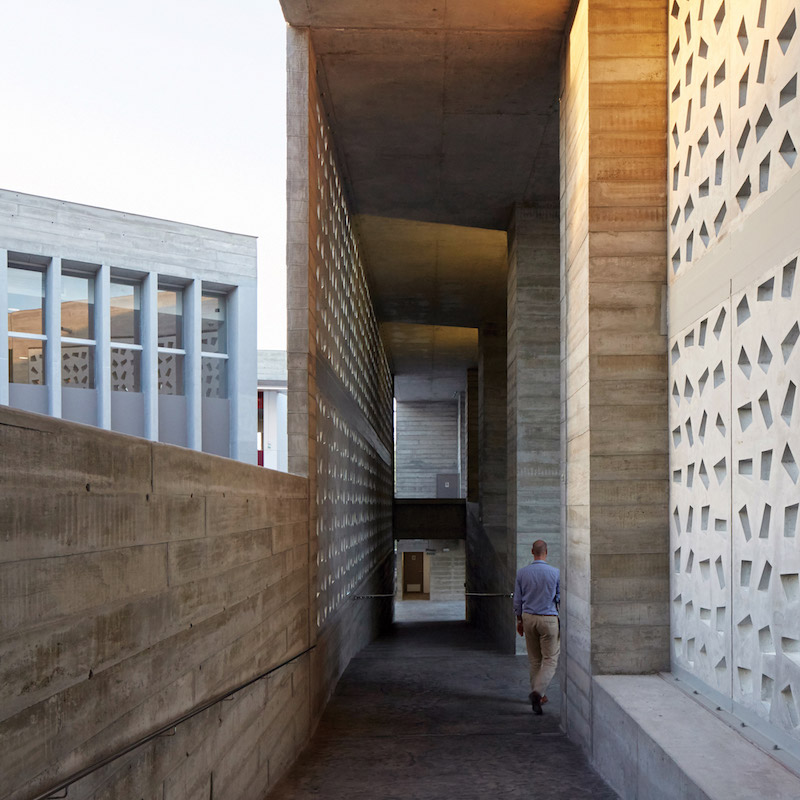 Barclay and Crousse continue, “The ambiguous, shaded exterior spaces sheltered by the buildings that form the whole were created to provide a place for informal learning and for life in the broadest sense. It has been immensely rewarding to see how students and professors occupy the structure, and to see how it has created a new centrality on campus, where people stay independently of having classes.”

“The jury recognized how the deceptive simplicity and modesty of Edificio E conceals and reveals a building of unexpected complexity, intensity and richness,” says Burdett. “Responding to the harshness of the sun and extreme dry heat of the savannah landscape of northern Peru, the design creates a dense inner world of unexpected softness and openness shrouded by porous concrete screens.”

Burdett expects that Edificio E’s cohesiveness and economy of expression will set a standard for educational buildings in the 21st century. “The building acts as a linchpin to the otherwise sprawling University of Piura campus. Like a vernacular village of narrow streets and open spaces—so typical of organic urban models across Latin America—the building compresses the collective human experience. A sequence of interconnected ramps, corridors, balconies and open spaces are hewn out of the orthogonal concrete mass, like crevices and ravines formed in mountain ranges over geological time. Its very compactness forces its users to come together, optimizing the democratic potential of a building that will be inhabited by young people for generations to come.”

Jury member Rodrigo Pérez de Arce similarly notes how Edificio E’s inventive yet economical approach works at a typological level. “It is not just a project but an exploration of a type, and therefore a set of spatial notions that invites emulation and even replication,” he says. “The building is technically undemanding for its simple rules and its recourse to well-tried materials and well-established building procedures.” 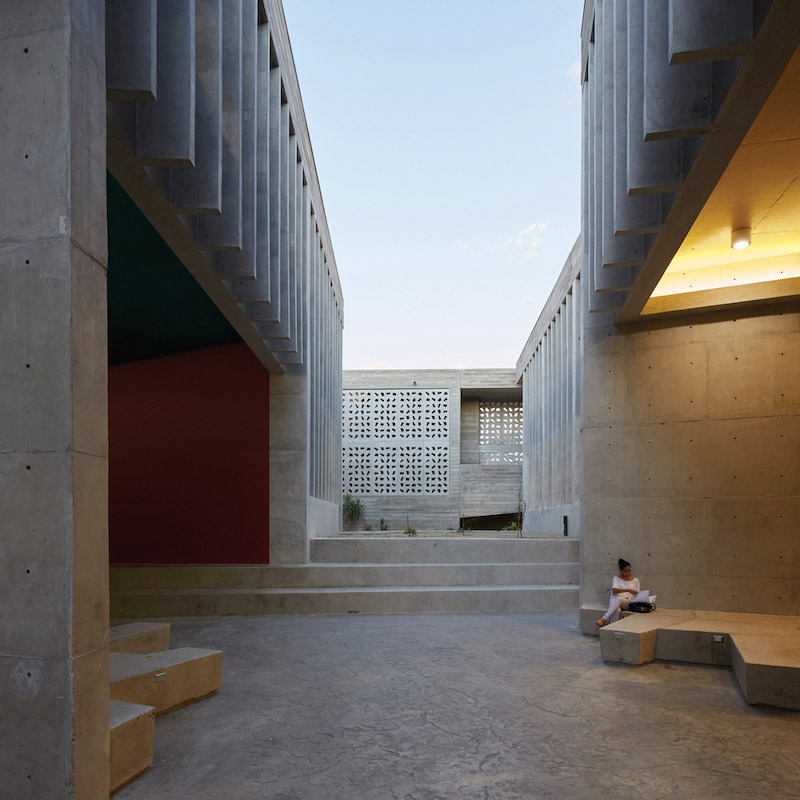 The jury also remarked on Edificio E’s thoughtful attention to its site, especially its demanding climate and risk of earthquakes. “This is perhaps the first building I have seen where the trees were as important as the classrooms,” says jury member Claire Weisz. “And it is inspiring to see the idea of designing for earthquakes resulting in a building that is at the same time many buildings, with a shared roof that both ties them together and is still open enough to create a village of individual elements.”

In drawing a connection between Edificio E and Crown Hall, Denison says, “Mies’s Crown Hall represents a fundamental enrichment in the understanding of how architects enclose and define space. I believe Edificio E will become a similar point of reference, but here it is the space between that enriches the collective architectural language.”

To realize Edificio E, Barclay & Crousse worked closely with the commissioning client, María Pía Chirinos, Research Vice-Provost of the University of Piura. “The trust, respect and friendship between us was essential for us to fully grasp the aspirations of the university and for the clients to accept an innovative building type that was conceived from their aspirations, the act of learning and the campus landscape,” Barclay and Crousse say.

Founded in 1994 in Paris, Barclay & Crousse Architecture manages a wide range of programs with a focus on relationships to both place and human well-being. Pertinence in use and care for time, space and light are central in their approach to architecture. Since 2006, the studio has been based in Lima, pursuing its activity in France with the Parisian studio Atelier Nord-Sud. Their transatlantic practice has been recognized with the first Oscar Niemeyer Prize and in several international biennales, and their work has been acknowledged by the International Committee of Architectural Critics (CICA) with the 2013 Latin America Prize. Barclay & Crousse have twice been awarded the Hexágono de Oro, the Peruvian national architecture prize: in 2014 for Place of Remembrance, a cultural center in Lima, and in 2018 for Edificio E. This spring, Sandra Barclay was named 2018 Architect of the Year in Architectural Review’s Women in Architecture awards.