Prime Minister announces $1.3B for SkyTrain spur in Surrey and Langley, B.C. 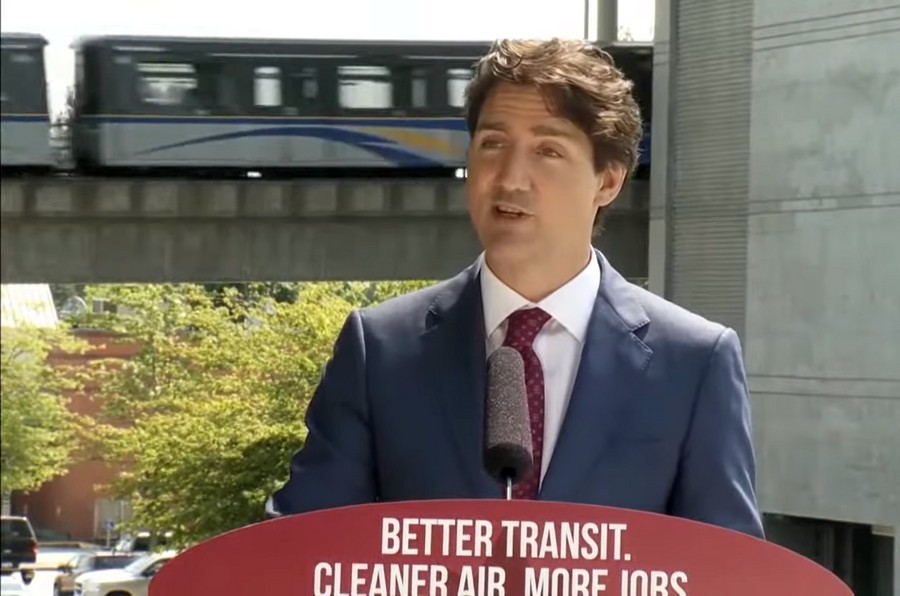 Trudeau made the announcement in Surrey with the SkyTrain line in the background, with several protesters yelling in the plaza behind him and a truck convoy on a nearby road circling the block with horns blaring.

“Nobody likes to be stuck in traffic when you could be home with your kids. This will cut commute times and make your life easier. That means spending more time doing the things that you love,” Trudeau said.

The extension from Surrey though to neighbouring Langley would be 16 kilometres long and include eight stations, three bus exchanges and 30 more SkyTrains.

“I don’t have to tell people in B.C. how important it is to continue accelerating our fight against climate change. Extreme weather and wildfires are only a few examples of the devastating consequences we’ve seen recently,” he said, referring to a wildfire that swept through the village of Lytton the day before Canada Day.

In 2018, Trudeau announced federal government funding for a light rail line through Surrey, but a newly elected local council passed a motion months later cancelling the system in favour of a SkyTrain extension linked to other Metro Vancouver cities.

Surrey Mayor Doug McCallum pumped his fist in the air when it was his turn to speak.

“It’s a great, great time, yes,” he yelled. “Today is a tremendous day for Surrey. We have been waiting a long time for the expansion of SkyTrain in Surrey.”

Surrey is one of Canada’s fastest-growing cities, with a population of about 600,000.

We also announced funding for the planning of the project that would extend the SkyTrain Millennium Line to UBC. To learn more about these investments, and how they’ll help us build back better and tackle climate change, click here: https://t.co/QGMcGBo5wJ

Trudeau, who was flanked by Infrastructure Minister Catherine McKenna, B.C. Premier John Horgan, McCallum and other politicians, said the project will create thousands of jobs and cut pollution.

Horgan said the extension will make a big difference in the look of the cities.

“What we’re going to be able to do … is not chase growth but help shape growth. That’s the transformative part about this announcement today.”

Trudeau made other campaign-style stops this week in Ontario, Saskatchewan and Alberta.

Today’s announcement of federal funding for the Surrey Langley SkyTrain extension and the UBC Millennium Line extension🚊planning means more affordable, quicker and cleaner ways for residents to get around.🌱🌎@sukhdhaliwal pic.twitter.com/IPcgN4j7Yw

Thank you 🙏 @TransLink for a great tour and all the work you do. And thanks 🙏 to my colleagues who have relentlessly advocated for better public transit across the region to create jobs and help residents get around in faster, cleaner & cheaper ways. 🌱 4/4 pic.twitter.com/FvqdZ9bEKv

Yesterday @JustinTrudeau & I announced that we’ll be working w/ the BC Gov on extending the SkyTrain out to @UBC.

Why does that matter?

🚊99 B-Line is the busiest bus corridor in North America
🚊80 K trips a day to and from UBC on transit
🚊Faster, cleaner, cheaper commutes pic.twitter.com/sZ9c6puMq0

This report by The Canadian Press was first published July 9, 2021.