Property values in Ontario increased by more than $37 million in 2020: MPAC assessment

The Municipal Property Assessment Corporation (MPAC) released its annual assessment rolls in Ontario, which reveals a change in the province’s property landscape. The assessed value of all properties in the province is now estimated to be more than $3 trillion. 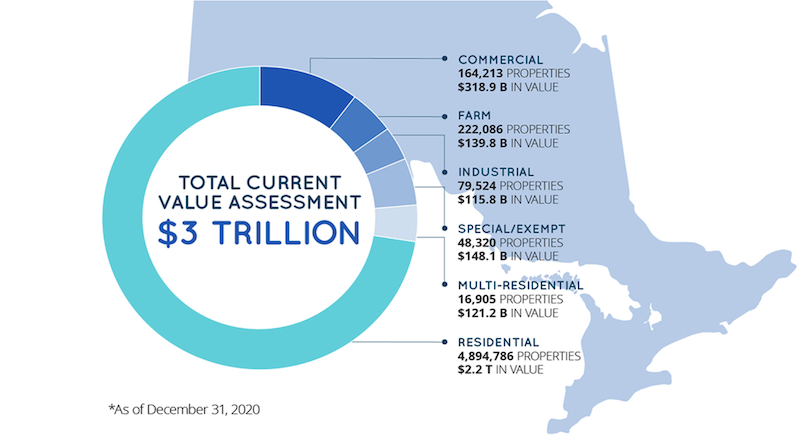 “Even during a pandemic, Ontario continues to grow as evidenced by the $37.3 billion in new assessment across Ontario from new construction and improvements to existing properties,” said Nicole McNeill, President and Chief Administrative Officer. “In 2020 Ontario saw more than 36,000 new residential units and 16,000 residential condominium units. And with people spending more time at home this year we saw a 28 per cent increase in the number of renovation permits this year as people invested in making improvements to their homes.”

“We valued nearly 1,700 new commercial and industrial buildings across Ontario,” said McNeill. “One area that saw substantial growth was the warehousing and logistics sector as we assessed eight new distribution centres with a total value of more than $405 million.”

Across Ontario, more than 60 per cent of new property value was located in 10 municipalities, according to the assessment. Toronto led the way with $11.65 billion new assessment, followed by Ottawa at $2.68 billion, Vaughan at $1.49 billion, Hamilton at $1.15 billion and Mississauga at $1.14 billion.

In other areas of the province, a major driver of property value was the construction of seasonal properties. Cottages accounted for nearly $600 million in new assessment. Muskoka Lakes had the largest growth with $59 million in new assessment, followed by Lake of Bays with $41 million, Seguin Township with $37 million, Innisfil with $28 million and the Kawartha Lakes with $21 million.

Property values and new assessment numbers for the province continue to be based on January 1, 2016, the valuation date for last province-wide Assessment Update. MPAC updates the current value assessment of every property in Ontario every four years to capture changes to properties and the real estate market. In March, the Ontario government postponed the province-wide Assessment Update that was scheduled for this year.

Average rent in the GTA down over 16 per cent annually: report

RCCAO calls on governments to commit more funds to municipalities