According to the February National Rent Report from Rentals.ca and Bullpen Research & Consulting, Montréal, London, Winnipeg, and Toronto are leading the way for increasing apartment rents.

The year-over-year change in Montréal from January 2019 to January 2020 is 38 per cent for median rent for rental apartments. For London the change is 36 per cent; Winnipeg is 23 percent and Toronto is 22 per cent, as measured by listings data on Rentals.ca

Seven other Canadian cities are in double-digit percentage increases for annual growth in median rents for apartments in January: Mississauga, 19 per cent; North York, 18 per cent; Etobicoke, 16 percent; Ottawa, 12 per cent; Scarborough, 12 per cent; Québec City, 12 per cent and Kitchener, 11 per cent.

Four cities witnessed double-digit percentage decreases for annual growth in median rents for apartments only in January: Saskatoon, -16 per cent; Red Deer, -14 per cent; Regina, -14 per cent and Edmonton, -10 per cent. 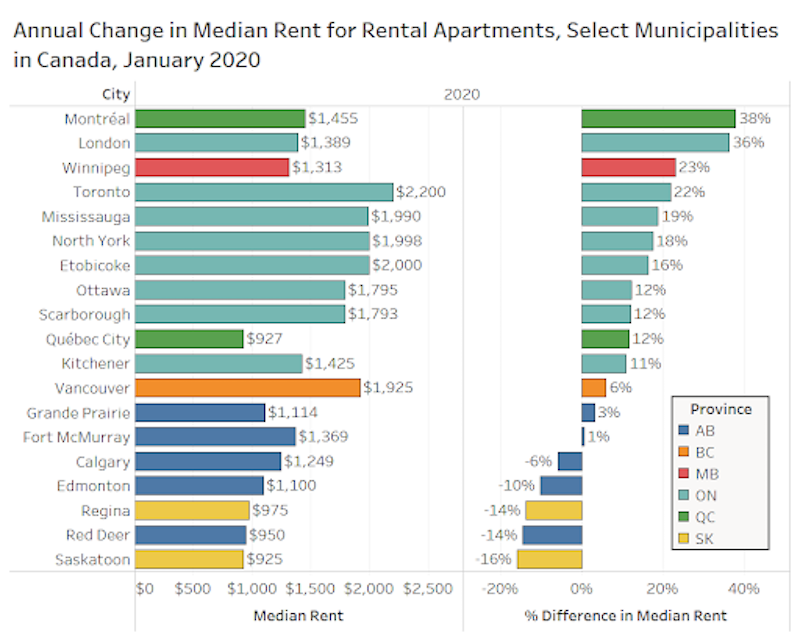 Average monthly rent for a one-bedroom and a two-bedroom home in Hamilton have risen by 28.8 per cent and 21.9 per cent respectively, according to listings data on Rentals.ca. Average monthly rent in Montréal is up nearly $400 from the first quarter of 2019 to January 2020.

“We see that renters in Montréal keep on searching for lower cost of living, and they’re willing to search outside of central areas to find affordable housing,” says Vincent-Charles Hodder, CEO of Local Logic.

While rental prices on the island keep on climbing, renters’ search for lower pricing is stronger than ever; listings with a lower price tag get viewed by many more users.

On an annual basis, average rents nationally for all property types are up just 1.3 per cent, in line with Rentals.ca and Bullpen Consulting’s call for muted rent growth in 2020. But for rental apartments, year-to-year rent has grown 5 per cent in Canada, rising from $1,463 per month to $1,536 per month.

Following three consecutive months of decline, the average rental rate in Canada for all property types increased month over month in January by 1.3 per cent to $1,879 per month. This increase remains well below the September 2019 high average rate of $1,954 per month.

Rents have increased significantly for all property types year over year in Québec (22 per cent) and British Columbia (17 per cent), but declined in Alberta (-3 per cent) and Saskatchewan (-11 per cent).

Average rental rates in Ontario continue to outpace the other major provinces in Canada, with an average rent of $2,290 per month in January 2020, a 6 per cent increase year over year. 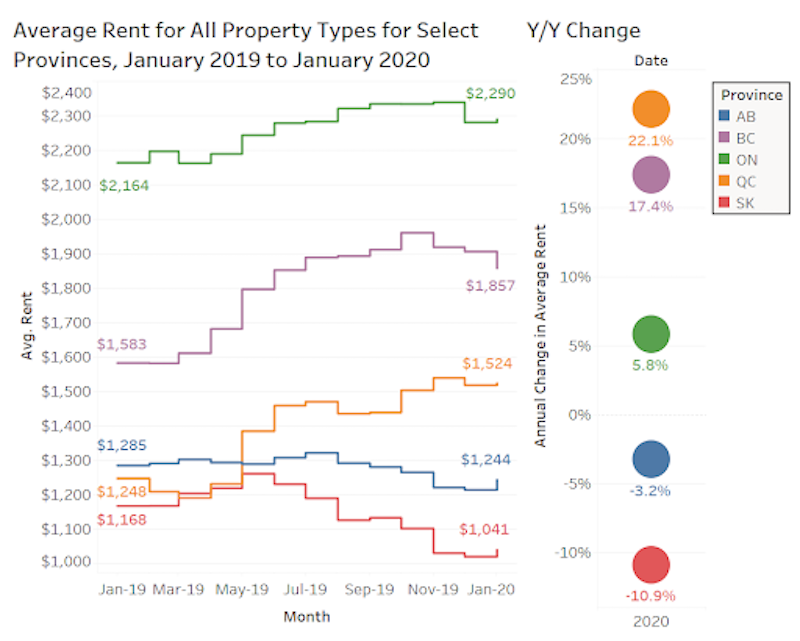 The community of Fort Nelson in northeast British Columbia had the lowest average monthly rent of the 30 cities in January with a one-bedroom home going for $587 and a two-bedroom at $707.

Other cities on the low end of average monthly rents in January include in order of most affordable for a one-bedroom home: Québec City, Gatineau, Saskatoon, Lethbridge, Red Deer and Regina.

“Annual growth in the average rental rate nationally cooled off in January, despite major rent increases in a number of municipalities in Canada,” said Matt Danison, CEO of Rentals.ca. “Some rental demand is shifting to the resale market as we are recovering from the stress test’s credit tightening, and the fear of interest rate hikes. This shift is also affecting the high-end rental market, as households choose to buy instead of considering these units.”

“The strong rent growth in Québec and Ontario is enticing developers to build more apartments,” said Ben Myers, president of Bullpen Research & Consulting. “According to Canada Mortgage & Housing Corporation, there were more rental starts than condo starts in January in both provinces. This supply is much needed to satisfy the increasing tenant demand, as the flattening out of condo rental rates could negatively impact investor activity and reduce secondary market supply.”