Rents in Canada to grow by 3 per cent in 2020: Rentals.ca Report

According to housing analyst Ben Myers, president of Bullpen Research & Consulting Inc., the average monthly rent is forecast to increase by 3 per cent in 2020.

Rentals.ca and Bullpen Research & Consulting’s December National Rent Report anticipates a 7 per cent increase in Toronto, 5 per cent in Montréal, 4 per cent in Ottawa, 3 per cent in Vancouver, and a 1 per cent decline in Calgary and Edmonton next year. 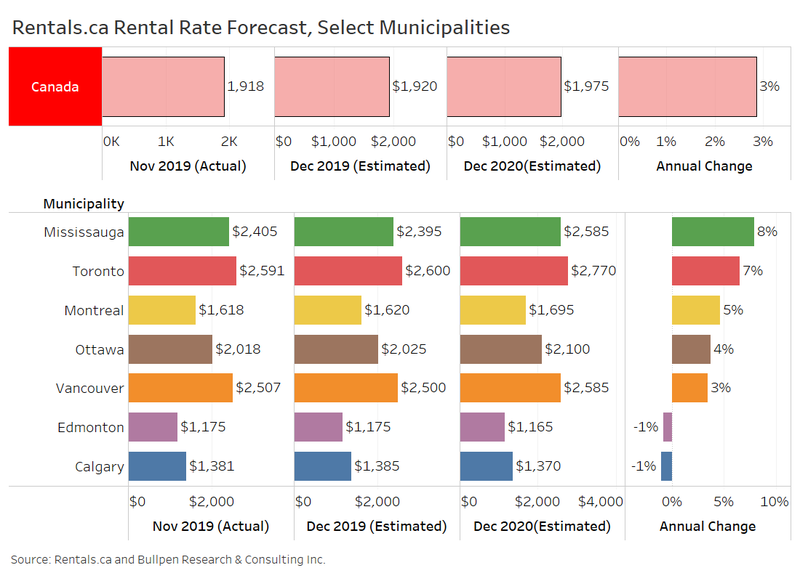 The impact of the changes to the mortgage stress test have started to fade as developers and investors look to increase rental supply to offset the increase in rental demand brought on by the decrease in mortgage credit and the spike in population over the past two years.

At the end of the third quarter, the Canada Mortgage & Housing Corporation reported almost 72,000 rental units under construction in Canada, the highest rate in over 30 years.

The average rent for Canadian properties in November 2019 was $1,918 per month, a decrease of 1.1 per cent monthly, but an increase of 9.4 per cent annually, according to Rentals.ca listings data.

In October, Hamilton and Scarborough led the pack with year-over-year rent growth of 25 per cent and 23 per cent, respectively for apartments with rental or condo tenure.

Two of the more affordable Canadian rental markets, Québec City and Winnipeg, have increased by 22 per cent and 21 per cent, respectively.

Red Deer, Calgary, Regina, Saskatoon, Edmonton and Fort McMurray all saw average rents for apartments decline from -1 per cent to -7 per cent from November 2018 to November 2019.

In Saskatchewan, the average monthly rent declined 9.7 per cent annually, while average rents in Alberta are down 3 per cent. 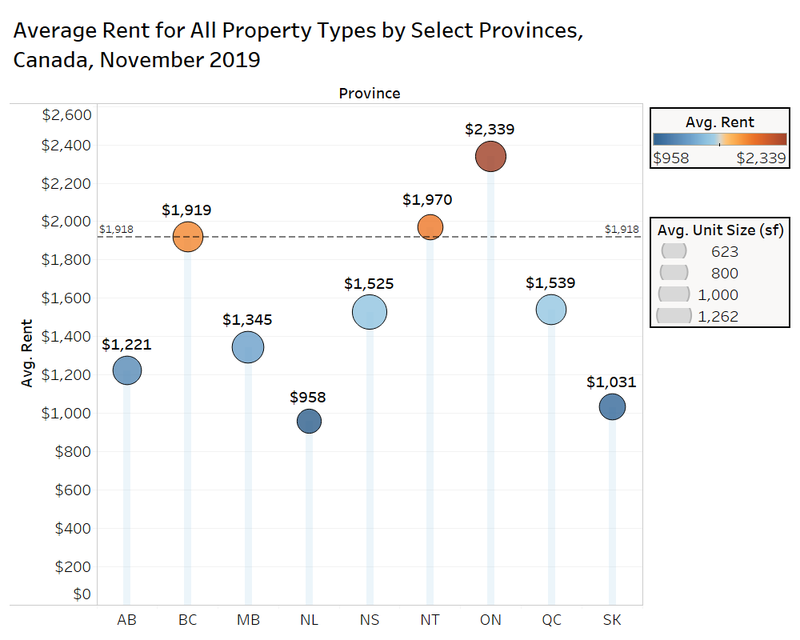 The annual increase in rents is supported by some of the smaller municipalities such as London, Hamilton, Kanata, Burlington, and Kitchener, which are all experiencing double-digit rent growth when considering all property types.

Developers are looking to cater to more affluent renters, including those shut out of the ownership market by increasing prices, younger renters choosing to be tenants for lifestyle reasons, and boomers and empty-nesters trading down from a larger dwelling.

“After years of focusing on the ownership housing market,” said Ben Myers, president of Bullpen Research & Consulting, “The media has focused more attention on the rental market as the mortgage stress test, expanded rent control, changing AirBnB legislation, rapid population growth, and record rental housing construction continues to disrupt the balance between supply and demand nationally. We expect the market to continue to be undersupplied overall in Canada in 2020.”

“After two years of unprecedented rent growth, which included several markets where average rents increased by 20 per cent or more, we do expect some moderation in 2020,” said Matt Danison, CEO of Rentals.ca. “There should be some supply relief in the Greater Toronto Area in 2020, but Rentals.ca and Bullpen expected average rental rates for all property types in Toronto and Mississauga to increased by 7 per cent to 8 per cent next year.”

Canadian Architects are Taking on the World