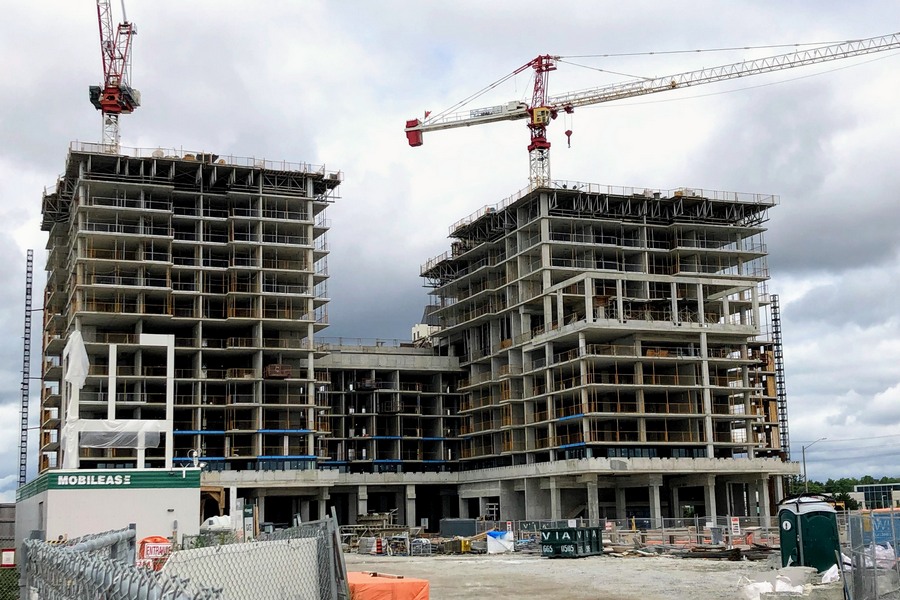 According to a recent report by Statistics Canada, the total value of building permits rose 6.9% to $10.3 billion in June. Seven provinces contributed to the gain, led by Ontario, which jumped 22.7%. Construction intentions in the residential sector were up 9.1%, while the non-residential sector advanced 2.2%.

High-value permits for new apartment buildings in the census metropolitan areas (CMA) of Toronto and Hamilton helped push multi-family permits up 13.5% to $3.7 billion nationally in June. Provincially, Ontario led the way, rebounding 67.8% to $1.8 billion. On the other hand, Quebec reported the largest decrease (-29.9%), pulling back from a record high in May.

Construction intentions for single-family dwellings increased 4.7% to $3.4 billion. Seven provinces saw gains in this component, led by Ontario and Alberta.

Construction intentions for the non-residential sector were up 2.2% to $3.1 billion in June. Gains were reported in eight provinces, led by Alberta (+32.7%).

The value of commercial permits rose 7.4% to $1.7 billion. High-value permits, such as the Agri-food Hub and Trade Centre in the city of Lethbridge and an office building in the city of Vaughan, helped Alberta (+54.8%) and Ontario (+16.2%) to lead this component. Newfoundland and Labrador, down 92.5%, returned to more typical levels following a strong May.

The institutional component was down in June, falling 6.7% to $871 million, as Ontario’s notable decrease (-37.7%) drew down the national level. Meanwhile, Quebec surged 38.4% to $359 million, as several permits issued for alternative care and senior citizen residences coincided with an initiative from the government of Quebec to increase the number of beds.

Total building permits declined 1.7% to $31.0 billion in the second quarter of 2021 compared with the previous period. Despite this, the value of building permits remained the second highest on record and was 38.5% above the same quarter in 2020, which was heavily impacted by COVID-19 restrictions in the construction industry.

The value of permits for the residential sector fell 4.2% to $21.4 billion in the second quarter. Permits for both multi-family and single-family dwellings dropped, with seven provinces reporting decreases.

Construction intentions in the non-residential sector rose 4.5% to $9.6 billion. Although second-quarter values exceeded the values in the first quarter of 2020, non-residential permits remained below the quarterly levels of 2019. Among the non-residential components, institutional permits increased for a fourth consecutive quarter, boosted by large projects in the education and health care sectors.

The International Garden Festival Announces the Designers for its 22nd Edition

Blackstone REIT to buy WPT Industrial REIT in deal worth US$3.1B including debt