Record operating metrics, a low Canadian dollar, financing costs at historical lows and active construction pipelines advancing across the country are driving a positive outlook for Canada’s hotel industry, according to Colliers International’s 2019 Canadian Hotel Investment Report. Transaction volume for Canadian hotel real estate was $1.5 billion in 2018, the eighth highest over the past 30 years. Investors are now spreading a wider net, expanding efforts from top-tier cities to secondary and tertiary markets across the country.

“We’re currently in one of the most profitable periods for hotel owners in the last 30 years,” says Alam Pirani, executive managing director of Colliers International Hotels. “Eight years into the current cycle, the Canadian hotel industry remains in an enviable position and continues to entice interest from investors. We are averaging over $2 billion per year during this cycle and we are now in an environment that sustains more than $1 billion in annual transaction volumes.”

“We’re seeing a trend towards limited service hotels, representing the lion’s share with 70 per cent of deals this year, over more traditional full-service hotels. Investors are also showing heightened interest in secondary and tertiary markets like Kitchener-Waterloo, Québec City, Windsor, Sudbury, and Kelowna, which are now providing superior returns compared to the traditionally strong markets in Vancouver and Toronto,” added Pirani.

Western Canada experienced a 30 per cent rise in the number of deals from 2017. However, uncertainty in energy markets and limited available product continue to impact transaction volume. 64 per cent of national transaction volume took place in Eastern Canada (east of Manitoba). Ontario was the most active province with 42 transactions and $612 million in volume. Québec saw a tripling of sales year on year to $303 million. 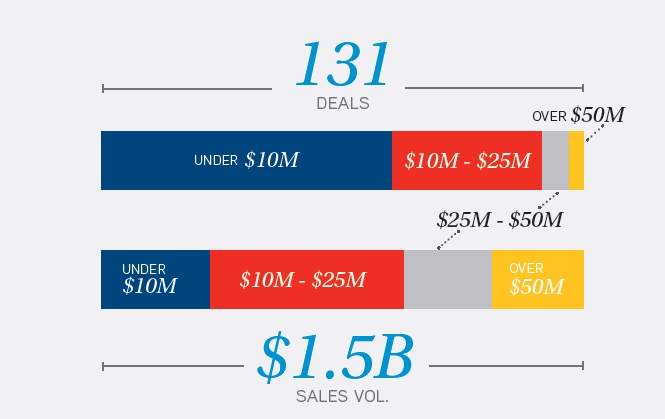 The lodging sector benefited from new records in international tourist arrivals in 2018, hitting 31.2 million in overnight trips. This contributed to robust revenue per available room (RevPAR) growth of 5.3 per cent and strong capitalization rates year on year, averaging 7.3 per cent. In addition, new supply increased by 1.4 per cent in 17 major Canadian markets, up from one per cent and 0.3 per cent in 2016 and 2017 respectively.

As reported in Colliers’ Q1 INNvestment Canada report, Canada hit a multi-decade low in 2009 for inbound international tourists with 15.7 million overnight stays. 10 years later, confluences of factors have assembled into a sustained rebound with 5.4 million additional overnight arrivals through the end of 2018, which hit a new record of 21.1 million. By market, the United States has contributed 2.8 million of the additional stays with a CAGR of 2.2 per cent, versus other-international markets at 2.6 million (CAGR of 5.1 per cent). The Canadian dollar, sustained international marketing, and growth of critical infrastructure in major cities, are expected to continue inducing cross-border travel. The United Kingdom has held the top position contributing approximately 814,000 tourists last year, however, China’s CAGR of 16.4 per cent over the past decade is by far the quickest growing market.

India and Mexico are among the top origins by growth rate with ten-year CAGRs of 10.3 per cent and 9.2 per cent, followed by Australia at 5.5 per cent and France at 4.0 per cent. Although the growth rate for Germany and Japan has performed below the market average, both countries have grown their absolute share of visitors.

Since the introduction of Approved Destination Status (ADS) in early 2010, China has hit a new record for overnight stays in Canada every year since 2003 averaging approximately 60,000 net new tourists annually. According to an averaging data published by Destination Canada, new routes from several Chinese cities to Canada has facilitated the increase of tourists with direct air seat capacity growing by nearly 17.8 per cent over the 2015-2018 period. This influx has been a key factor to accommodate the approximate 600,000 arrivals over the past decade. In a study published by McKinsey & Company, estimated outbound trips should continue to grow by an average of 6.5 per cent per year through 2020.

The report suggests that the low levels of the Canadian dollar will continue to provide an important catalyst for additional cross-border travel demand. Canada’s tourism marketing initiatives remain a critical component to capturing growing overnight tourism from first-time travelers markets such as China, India, and Mexico. The longer length of stay and overall expenditures present a lucrative opportunity for the lodging sector. 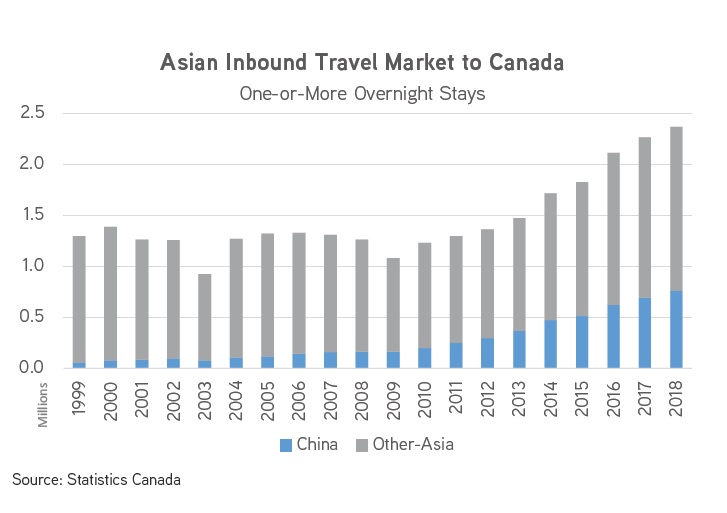 Looking ahead, Canada’s low Canadian dollar is expected to elevate levels of international and domestic tourism, painting a positive picture for the 2019 hotel industry. The Colliers report is predicting a surge in hotel development with national new supply growth expecting to crest two per cent this year, up from a one per cent per year average. RevPAR is also expected to increase five per cent in 2019.

Already, approximately $226 million of hotel transactions occurred across Canada in the first quarter of 2019 with 29 deals reported. Market activity paced below the $350 million recorded in Q1 2018, while average price per room metrics remained stable year-over-year at $81,700. 90 per cent of hotel transactions by number of deals were limited-service properties in secondary and tertiary markets.

Colliers expects another $1.5 – $2 billion in transaction volume this year, fueled by an up-tick of large single asset and portfolio deals driven by domestic capital. While in recent years foreign investment has driven transaction volume to reach highs of $4.1 billion in 2016, today’s asset mix is more appealing to Canadian investors.  “Domestic investment is a core area of strength in Canada,” says Pirani. “There’s been no shortage of domestic capital propelling the market during the past eight years and, in fact, it has driven two thirds of hotel transaction volumes since 2011. Expect this trend to continue into 2019.” 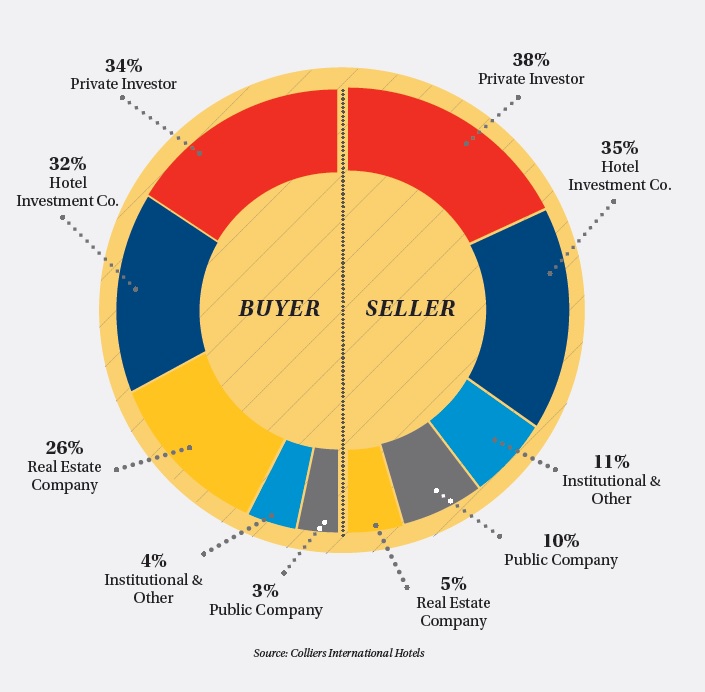