Kelly Rae, the administrator of Arran, Sask., says the denizens of dwindling rural communities like her own are clinging to a vanishing way of life in Canada.

Between 2011 and 2021, the village west of the Manitoba border saw its population slashed in half to just 20 people, Statistics Canada reported on Wednesday, as it released the first tranche of data from last year’s census.

However, the count showed that Canada’s rural population grew faster than any other G7 country, ticking up 0.4 per cent over the five-year period to 6.6 million people in May 2021.

This rate trails behind the 6.3 per cent increase reported in urban areas. But analysts say that some of the metropolitan sprawl is spilling over into neighbouring rural outposts, while remote communities like Arran struggle to keep their remaining residents. 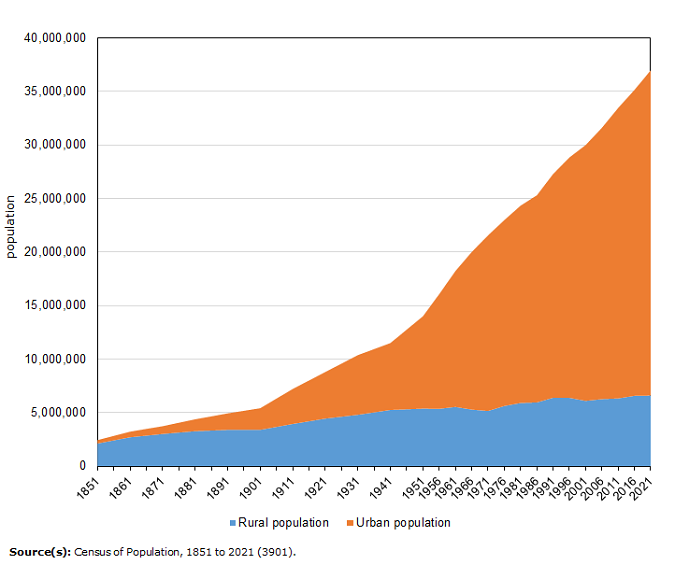 “It’s just a disappearing village. It’s unfortunate, but that’s the way it is. We have nothing here,” said Rae. “People just don’t want to live in little municipalities anymore.”

Rae said she’s seen locals leave to be closer to schools, health-care providers and other services that have become clustered in urban centres such as Yorkton, Sask., about an hour-and-a-half drive southwest.

All that’s left in Arran is the rural municipality’s office and a bar that’s rumoured to be up for sale, Rae said.

But maintaining roads and water systems costs just as much whether there are 50 or 10 taxpayers footing bill, said Rae.

The “million-dollar question” rural communities face is how to cover these routine infrastructure costs without making it more expensive for residents to stay, said Rae.

Rae said Arran has come up with a new approach to this problem: council is considering selling off lots to be turned into campsites where visitors can enjoy recreational activities such as hunting, fishing and snowmobiling.

“The problem in a lot of these disappearing communities is instead of thinking of other initiatives, they’re stuck in thinking … ‘We’ll just raise taxes.’ But if you raise taxes, you’re going to chase your people away,” she said.

“I think if (council) is successful, we’ll be able to be solvent and keep our tiny village and our way of life.”

Statistics Canada’s definition of “rural” is an area with fewer than 1,000 people and a population density of fewer than 400 individual per square kilometre.

Laurent Martel, director of the centre of demography at Statistics Canada, said a wide variety of communities fall within these criteria.

“Very often people think that the rural areas of the country are homogeneous, but that’s not the case at all,” he said. “The population growth among these different types of rural areas are very different, one from the other.”

Martel said the census showed that one of the key drivers of rural demographic change was geographic proximity to urban areas and the size of those population centres. Statistics Canada uses these factors to classify regions on an index of remoteness.

The agency found that the areas that were deemed least remote reported a growth rate of 5.9 per cent between 2016 and 2021, compared to a 2.7 per cent decline in the most remote areas.

Martel said rural areas near some of the country’s largest urban centres have experienced accelerating growth since the last census.

For example, he said, several census divisions outside Montreal – including L’Assomption, Joliette, Marguerite-D’Youville, Mirabel and Roussillon – each saw greater population gains than the previous five-year average.

The census only captures the first year of the COVID-19 crisis, and data on the pandemic’s demographic disruptions is still emerging, said Doug Norris, chief demographer at Environics Analytics.

But Norris said early evidence suggests the flexibility of remote work has made the allure of rural life that much more attractive to city-dwellers searching for affordable real estate and a slower pace of life.

“That’s where you can have your cake and eat it,” said Norris, who spent 30 years at Statistics Canada.

“You get out from the urban rush, but if you want to go to the theatre, you can still drive downtown in maybe an hour.”

But in the far reaches of Canada, rural-to-urban migration, aging populations and lower rates of immigration have decimated many rural communities over the past two decades, and there are no signs of the drain slowing down, Norris said.

Ashleigh Weeden, a doctoral candidate in rural studies at the University of Guelph, cautioned against falling prey to a view of rural communities as leisurely havens for out-of-towners.

Instead, Weeden said, the focus should be on investing in rural infrastructure to afford these communities the same standard of living _ including access to internet, roads, health care and education _ as their urban counterparts.

“The transition into looking at place-based development rather than rural versus urban … will help us move in that direction.”

This report by The Canadian Press was first published on Feb. 9, 2022.

– with files from Jordan Press in Ottawa