A new report has been released by the Royal Bank of Canada, authored by Robert Hogue, a member of the Macroeconomic and Regional Analysis Group, with RBC Economics. Below is a repost of the report – which can also be downloaded as PDF or viewed with interactive graphs. 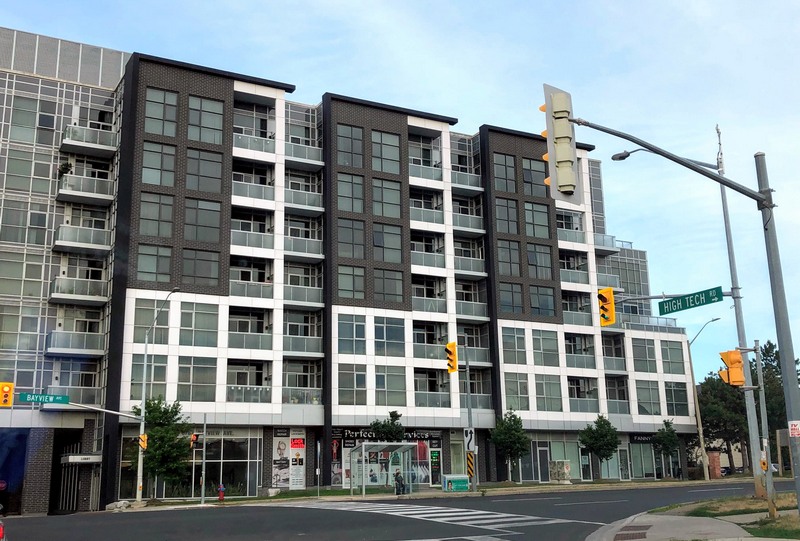 Among the seismic shifts the pandemic has spurred across the Canadian economy, few are as profound as those that have rocked Canadian real estate. The battle to control the spread of COVID-19 has not only altered how and where Canadians work, but also led many to question where and how they want to live. Rural and suburban areas that once lagged desirable city addresses are now roaring hot as homebuyers wearied by lockdowns seek bigger yards and larger living spaces. Tight downtown condo markets that previously commanded expensive rents are now thick with supply. And the flow of immigrants that typically fuel demand for housing of all types has slowed to a trickle. In just months, the landscape of Canadian real estate has been shaken to its core. Whether the changes are permanent or transitory is an open question, but one thing is certain, 2020 has been a year like no other for Canadian housing markets. Here we look at seven ways COVID-19 has affected housing.

Lockdown orders sent a shock through the housing market in March, suspending open houses and flat-lining sales during what is typically a high season for the market. Spring activity wasn’t lost though. As social distancing restrictions were relaxed in the summer, the market sprang back to life. This led to record-high activity over the July-September period. Pent-up demand was largely exhausted by September and we expect a return to more normal levels later this fall. 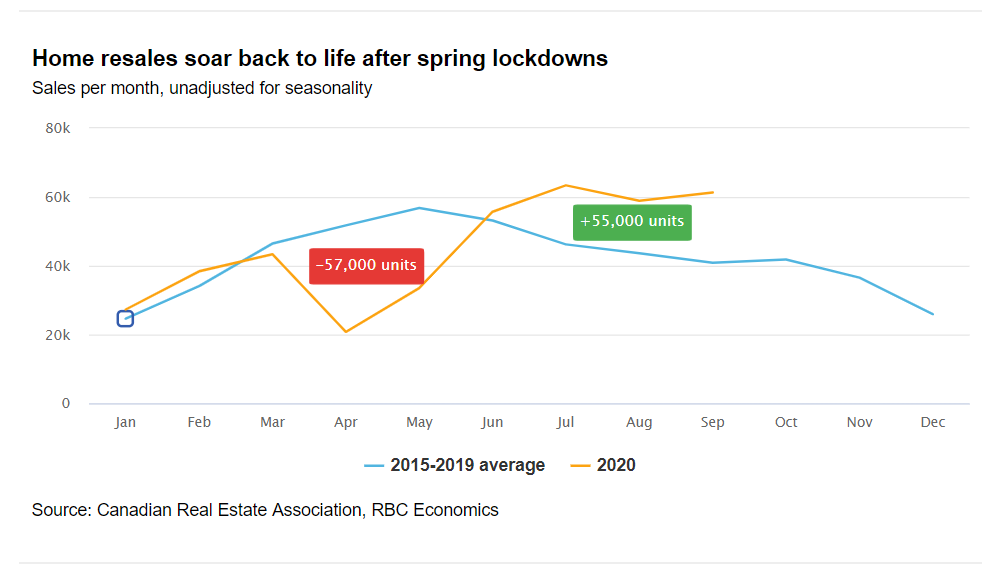 Following years of steady increases, rent is now declining in Toronto, Montreal and Vancouver, especially in higher density, downtown locations. Underlying the shift: is a surge in rental supply as the short-term rental business dries up and new purpose-built rental and condo units are completed. It all comes at a time when many renters have come under heavy financial pressure. Renters tend to earn less than homeowners, and it’s been lower-income and younger Canadians who suffered the most job losses during the pandemic. Demand near post-secondary institutions has softened too, due to the switch to online study and the closing of our border that kept many foreign students abroad. 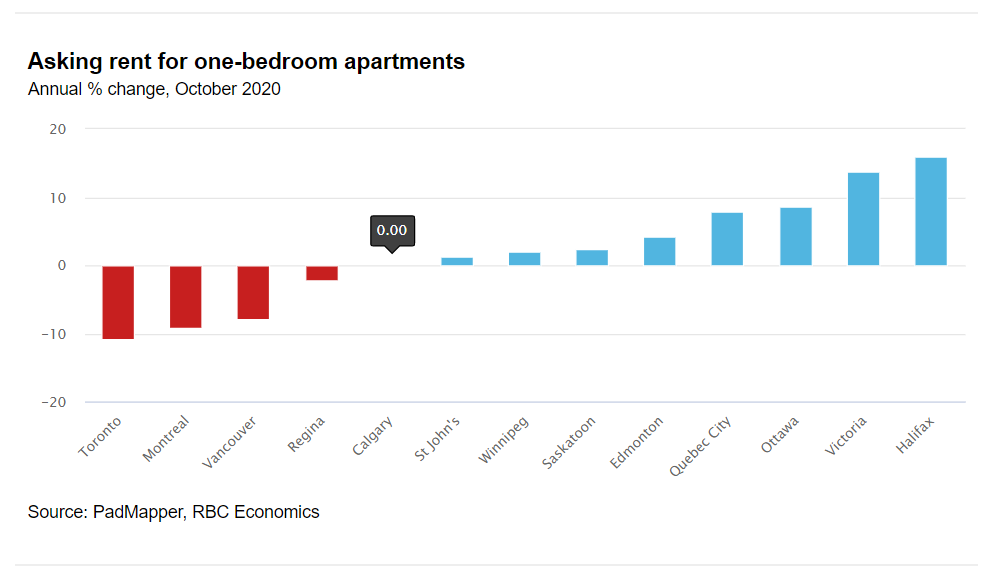 As rents soften and vacancies rise, condo listings are spiking in Toronto, Montreal and Vancouver—albeit from low levels. New, stricter regulations in Toronto are adding to the impulse to sell – at a time when new condo completions are bringing more units to the Toronto and Vancouver. 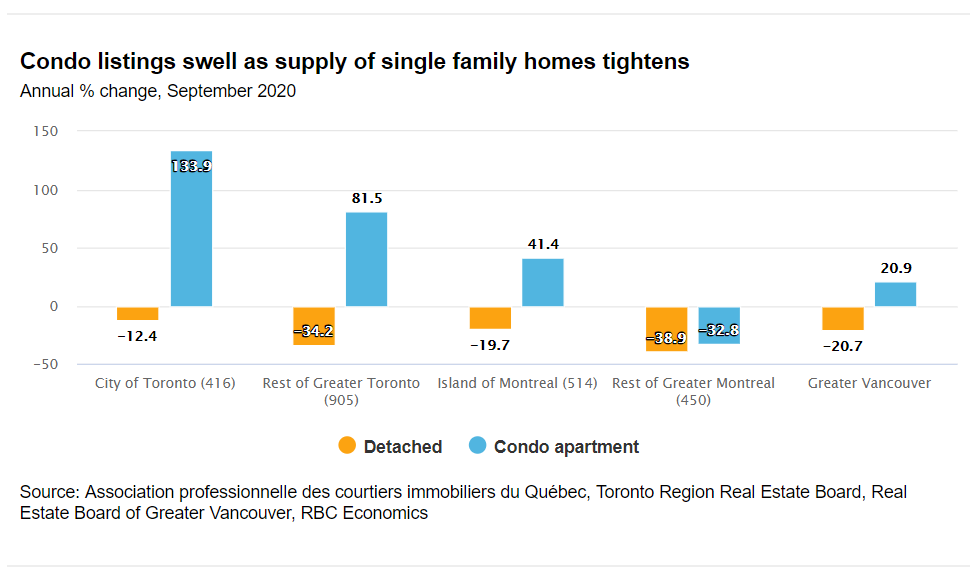 Big-city living has lost some of its luster with social distancing measures severely restricting cultural life and socializing opportunities. Working and studying from home is now a reality for many, further eroding the attachment to big cities. Meantime, affordability issues are driving many Canadians further afield into smaller towns and cottage country, where larger living spaces are available. Clearly COVID-19 has lit a fire under cottage country real estate. 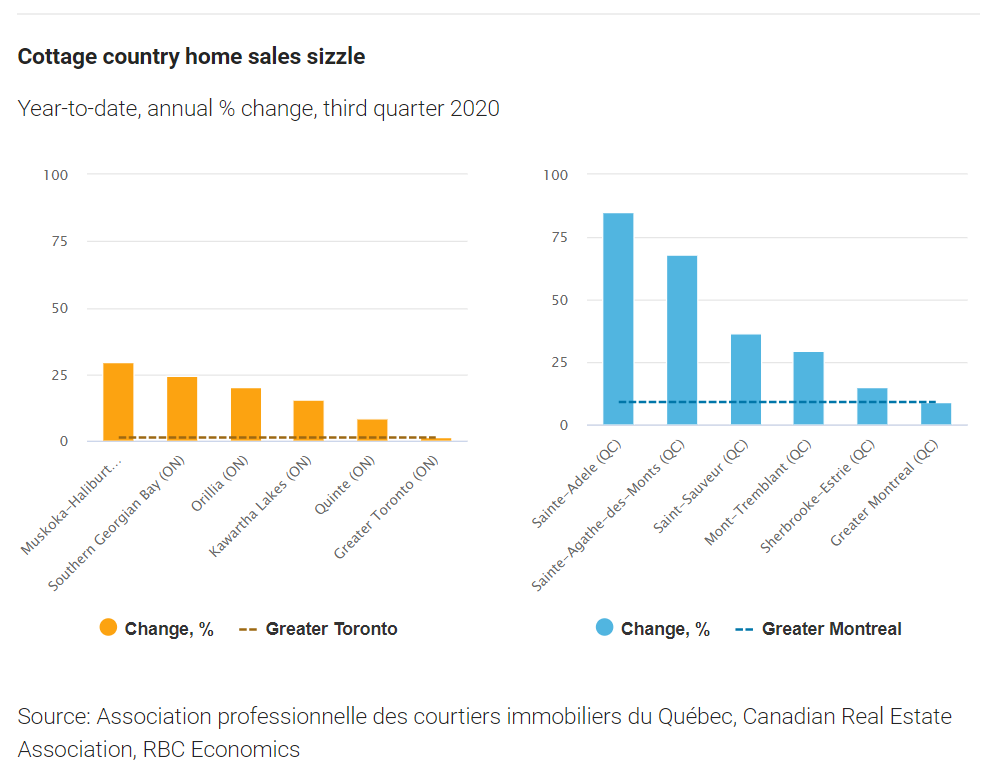 With the Bank of Canada’s overnight rate cut to close to zero and sharp declines in bond yields mortgage rates have been pushed to their lowest levels on record. This slightly reduced mortgage payments on a home priced at market value despite prices continuing to rise at an accelerating pace in most of Canada. Generous government income support programs for households most affected by COVID-19 also made it easier to carry mortgage payments. Overall, Canadian households received more money ($56 billion) from government aid programs such as CERB and other transfers in the second quarter than they lost in wages and salaries due to the pandemic ($23 billion). On net, household disposable income spiked 11% in Canada. This substantially increased buyers’ purchasing power. 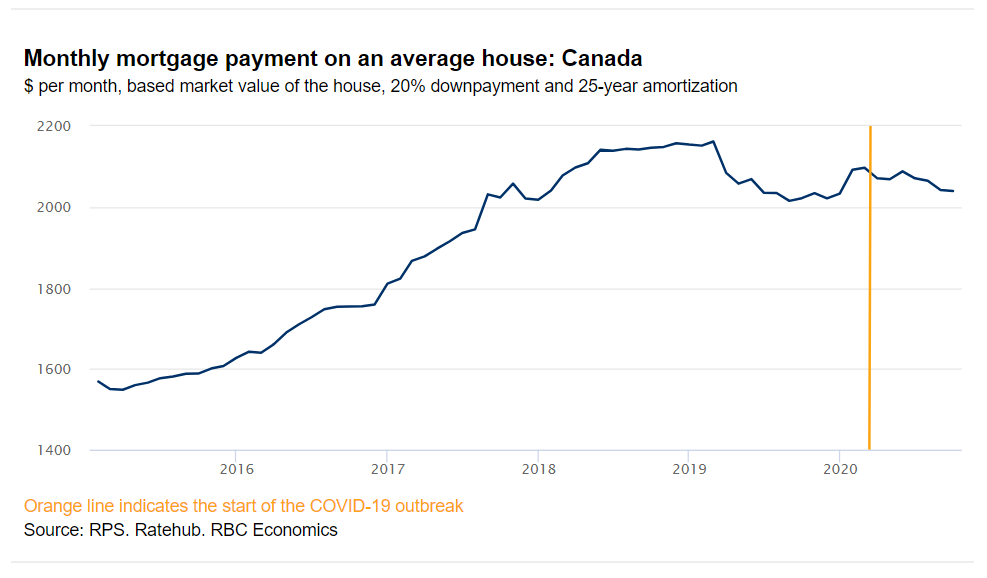 COVID-19 has severely disrupted the flow of immigrants moving to Canada—a major source of housing demand. In the second quarter of 2020, the number of new permanent residents plummeted 64% and more non-permanent residents left our country than came to it. The impact was dramatic: total net migration collapsed 94%. With the border poised to remain closed to all but essential travelers, and most post-secondary students continuing to study at home until immunization from COVID-19 reaches high levels in Canada and abroad – immigration is unlikely to rebound soon. To date, weak in-migration has had minimal impact on Canada’s overall housing market. But if sustained, we expect it will temper rental demand in larger markets as immigrants tend to rent in their first 5-10 years after landing into our country. This could have negative repercussions for condos and longer term, an extended period of weak in-migration could deplete future cohorts of first-time homebuyers. 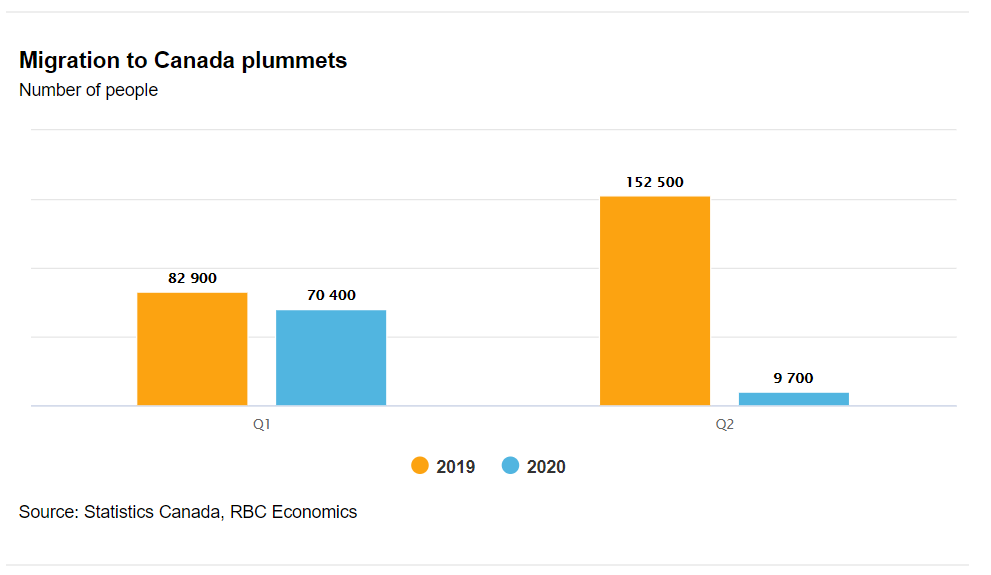 The sheer economic shock of COVID-19—with unemployment soaring to unprecedented highs—directly impacted many Canadians and put many others on the defensive. Almost 780,000 people opted to defer mortgage payments since the start of the pandemic, representing 16% of mortgages in bank portfolios. By the end of August, the vast majority of mortgage holders whose deferral period has expired had resumed regular payments. However, it remains unclear how many will ultimately be able to continue as outlook for jobs remains bleak for many Canadians. This poses a risk for the housing market, especially in areas where the economy is shakiest. Financial strains could potentially unleash a wave of properties for sale. 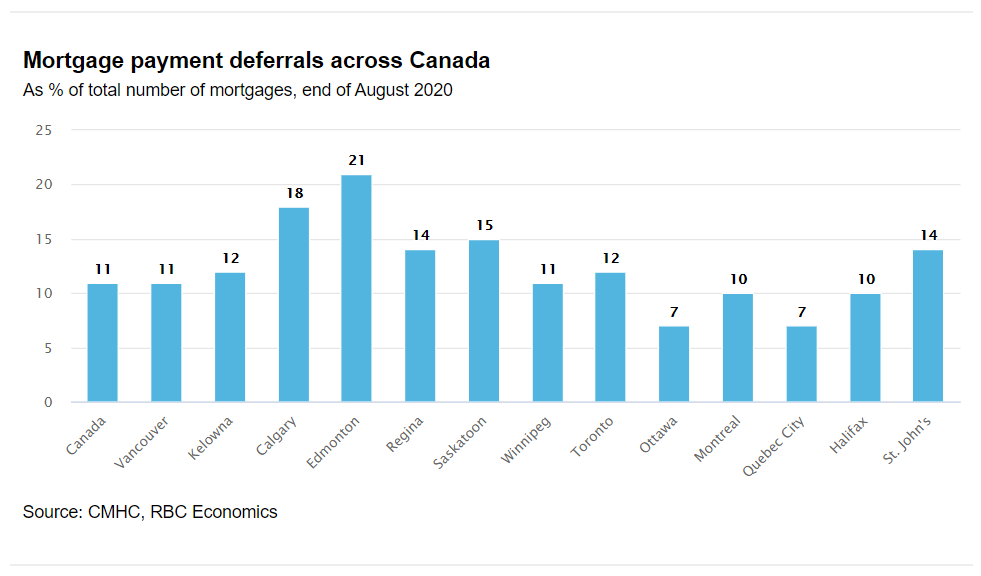 Robert Hogue is a member of the Macroeconomic and Regional Analysis Group, with RBC Economics. He is responsible for providing analysis and forecasts for the Canadian housing market and for the provincial economies. His publications include Housing Trends and Affordability, Provincial Outlook and provincial budget commentaries.

This article is intended as general information only and is not to be relied upon as constituting legal, financial or other professional advice. A professional advisor should be consulted regarding your specific situation. Information presented is believed to be factual and up-to-date but we do not guarantee its accuracy and it should not be regarded as a complete analysis of the subjects discussed. All expressions of opinion reflect the judgment of the authors as of the date of publication and are subject to change. No endorsement of any third parties or their advice, opinions, information, products or services is expressly given or implied by Royal Bank of Canada or any of its affiliates.