Sidewalk Labs Publishes Comprehensive Blueprint for the Neighbourhood of the Future: Full Release

TORONTO—Sidewalk Labs’ draft Master Innovation and Development Plan (MIDP) for Toronto’s eastern waterfront, titled Toronto Tomorrow: A New Approach for Inclusive Growth, was publicly released today. It spans three volumes plus an overview, more than 1,500 pages in all, and includes detailed plans for dozens of innovations—from thermal and advanced energy grids, to factory based construction of timber buildings, to a dynamic mobility network with heated bike lanes and adaptive traffic signals—that in combination aim to dramatically increase sustainability, affordability, and ease of transportation, and improve many other facets of urban life. Toronto Tomorrow can be explored and downloaded in full at www.sidewalktoronto.ca.

Implementation of the plan would produce an economic windfall for Toronto, Ontario, and Canada, and accelerate the development of Toronto’s eastern waterfront by a decade. Sidewalk Labs proposes to provide, along with local partners, up to $1.3 billion in funding and financing, which would catalyze $38 billion in investment, primarily by third parties, by 2040. A report released today by the Toronto-based consultancy urbanMetrics quantified the effects of Sidewalk Labs’ proposal, estimating that at its fullest scale, it would directly create 44,000 jobs (27,000 more than would be created in a business-as-usual baseline scenario), generate $4.3 billion in annual tax revenues ($2.8 billion more than the baseline), and add $14.2 billion annually in Canadian gross domestic product ($9 billion more than the baseline).

Dan Doctoroff, CEO of Sidewalk Labs, said: “This proposal aims to do something extraordinary on Toronto’s eastern waterfront: create the neighbourhood of the future in the right kind of way, with people at its centre, and with cutting edge-technology and forward-thinking urban design combining to achieve ambitious improvements in the urban environment and in the way we all live. Waterfront Toronto set a high bar for what it hopes to achieve with this project, and we believe we can meet it. If, together, we can shorten commute times for hard-working households, make housing more affordable, and create a new standard for a healthier planet, then the world will take notice.”

Toronto Tomorrow includes detailed plans for Quayside, a five-hectare site primarily owned by Waterfront Toronto, and envisions a new Canadian headquarters for Google on the western edge of Villiers Island to serve as an economic anchor for the revitalization of the Port Lands. These are the only areas that Sidewalk Labs, together with local partners, would develop—representing less than 7% of the eastern waterfront. The proposal outlines governance structures to enable the ideas, innovations, and infrastructure systems piloted in these areas to scale across a broader area representing about one-third of the eastern waterfront, known as an Innovative Development and Economic Acceleration (IDEA) District. Government would decide whether to scale the project beyond Quayside and Villiers West, with real estate development done by other parties.

Doctoroff continued: “Our approach is inspired by Toronto’s deep commitment to inclusivity. We are not interested in creating a corporate campus or a gated community, but rather a diverse neighbourhood that embraces the complexity and serendipity that makes cities great. Our plan puts the public sector in the driver’s seat in a way that stands in contrast to the clashes between other startups and city governments. Sidewalk aims to partner with government in order to create the conditions for real estate developers, civic organizations, tech companies, and residents, workers, and visitors to build a great community in the decades to come. We look forward to Waterfront Toronto’s consultation and evaluation process, which we hope will lead to the implementation of this plan.”

The draft Master Innovation and Development Plan, if approved and implemented at full scale, would deliver:

Sidewalk Labs’ proposed role and business model would draw on its strengths to support the public sector and encourage others to develop real estate and technology. Sidewalk Labs would lead real estate development with local partners in just two areas—Quayside and Villiers West—to prove out its innovative development approach. Together, these areas represent less than 7% of the eastern waterfront. If the innovations piloted at Quayside and Villiers’ Island are successful, government could choose to apply them to a broader area, known as the Innovative Development and Economic Acceleration (IDEA) District. The IDEA District would be led by a strong public administrator, with whom Sidewalk Labs would advise as Innovation and Funding Partner. Over the life of the project, Sidewalk Labs would serve in several roles, each involving specific commitments and associated business models: 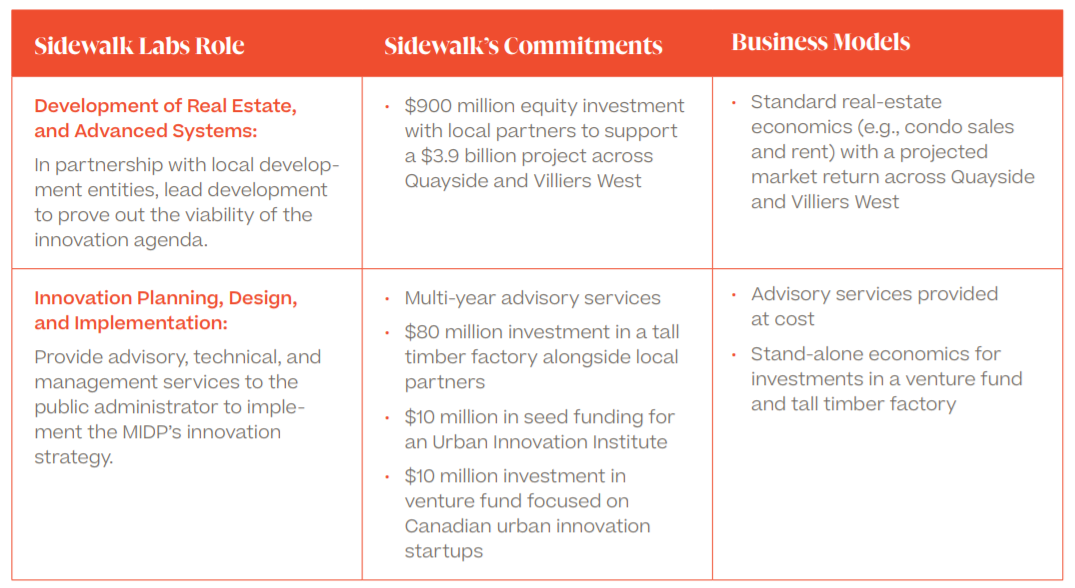 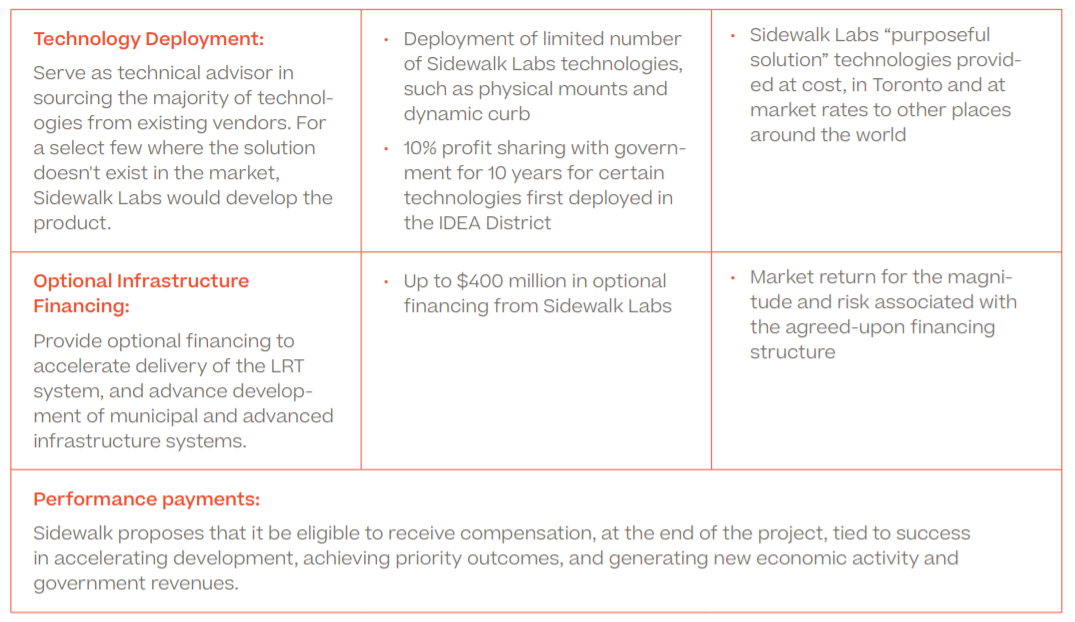 To proceed, the transaction would involve certain commitments from the public sector:

In its entirety, the proposal contemplates leveraging private-sector resources to deliver over 30% more square feet of development on a timeline at least 10 years faster than current plans contemplate. All told, Sidewalk Labs and local partners would invest up to $1.3 billion in the project, which would catalyze $38 billion in investment across the IDEA District, primarily by third parties, by 2040.

The project was initiated by a Request for Proposals (RFP) issued by Waterfront Toronto in March 2017. Sidewalk Labs was one of many firms that responded and participated in the procurement process, which lasted seven months, before being selected and announced as Waterfront Toronto’s “Innovation and Funding Partner” in October 2017. No land was transferred with the awarding of the RFP. As Waterfront’s partner, Sidewalk Labs has committed more than $50 million USD over the last year and a half to develop the draft MIDP.

In December 2018, Waterfront Toronto published detailed evaluation criteria that the agency said it would use to evaluate Sidewalk’s eventual proposal, along with a public consultation process. Earlier this month, Toronto’s City Council Executive Committee voted unanimously to establish and fund a separate process for reviewing and seeking public feedback on the MIDP. These processes will now commence.

Sidewalk Labs is an Alphabet company, founded in 2015, that aims to combine world-class urban design with cutting-edge technology to set new standards of sustainability, affordability, and economic opportunity for people of all incomes, abilities, and ages. Sidewalk has offices in New York and Toronto, with more than 30 full-time employees now based in Toronto.