After unveiling plans for a Studio Gang-designed tower at Yonge and St. Clair earlier in the summer, Slate Asset Management enters the fall market with a new mid-rise condo offering in the Junction. Designed by acclaimed Canadian architects, superkül, and emerging local interior design firm, Dialogue 38, Junction House further solidifies Slate’s approach of leading with design and city building when it comes to residential development. 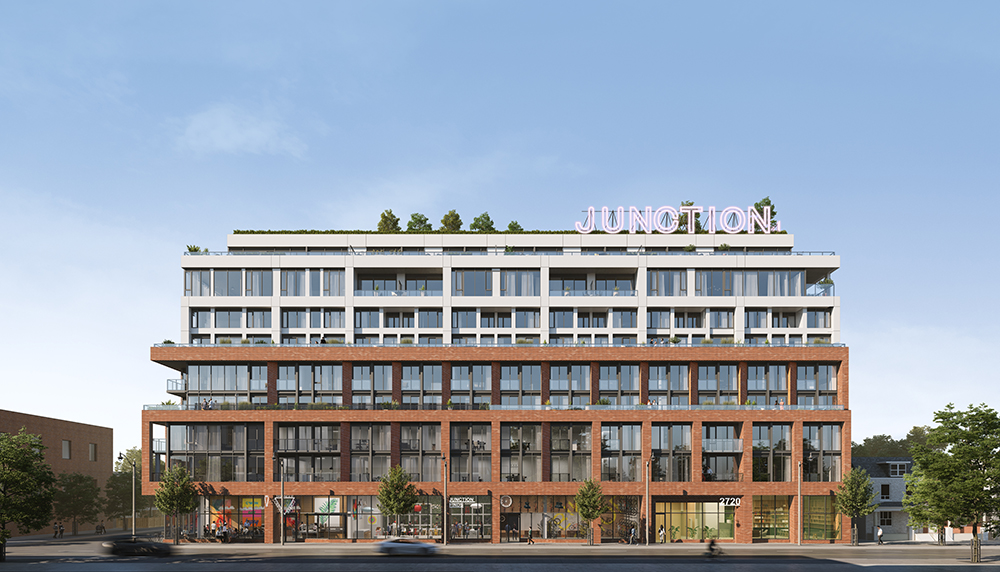 “We invest in designers because we believe in design innovation,” says Brandon Donnelly, VP of Development for Slate Asset Management. “For us, good design moves beyond aesthetics and actually solves problems and creates value for people. We want to empower each of our collaborators to come up with bold ideas, as well as think beyond our individual projects and consider the broader community.”

Sited at 2720 Dundas St W, just as the road begins to bend, Junction House is conceived as a new gateway into one of Toronto’s most vibrant neighbourhoods. The ambitious design brief challenged superkül and Dialogue 38 to define a Canadian brand of minimalism that at the same time reflects the historic material palette and creative energy of the Junction community.

“One of our inspirations was picking up on Scandinavian and Japanese approaches to minimalism, but through the lens of the Junction. What would that look like? How could we make sure our homegrown brand of minimalism is seen as approachable and in keeping with the neighbourhood?” says Donnelly. “We also really wanted to look at multi-storey suites – which eventually became The House Collection — and explore how we could replicate the single-family experience in a boutique mid-rise format,” he adds, citing the influx of families into the Junction and the need for new residential options in the city more broadly. 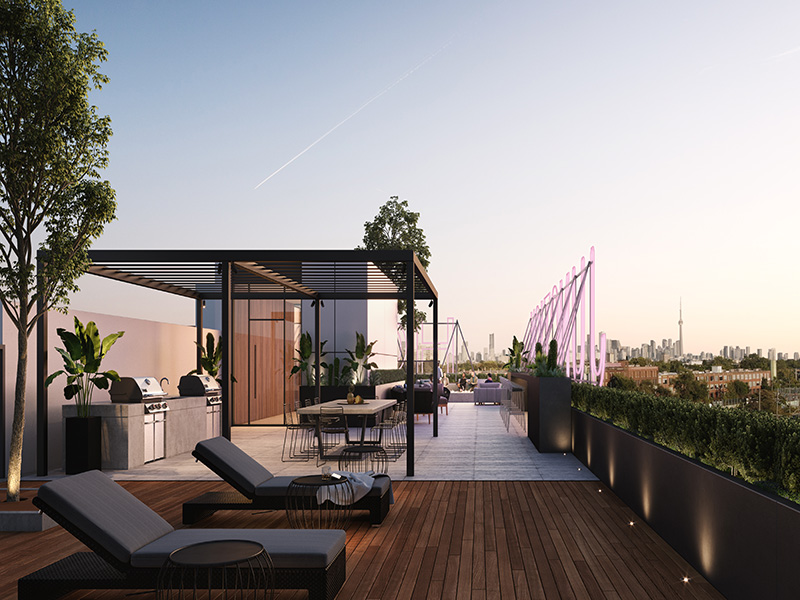 “The building was designed from the inside out,” says Andre D’Elia, Principal at superkül. “We focused on the suites because, ultimately, that is where people are going to live and spend most of their time. We didn’t just design a nine-storey building, we designed 144 homes that occupy the same built form.”

When it came to the exterior cladding, D’Elia says the focus was on reflecting the immediate context, while elaborating on the details. “We immediately thought of red brick, which is prevalent in the neighbourhood, and ended up cladding the first five storeys of the building with it. In order to add a sense of movement we staggered and angled the brick columns to play with light and shadow. We’re also introducing some old-world brick-coursing to add visual interest and mirror the local context.”

Dialogue 38 was tapped for the interiors after Donnelly visited a café designed by the firm in the east end of downtown. “Their work is what motivated us to reach out, because it seemed to get the Canadian minimalist sensibility we were after,” explains Donnelly. 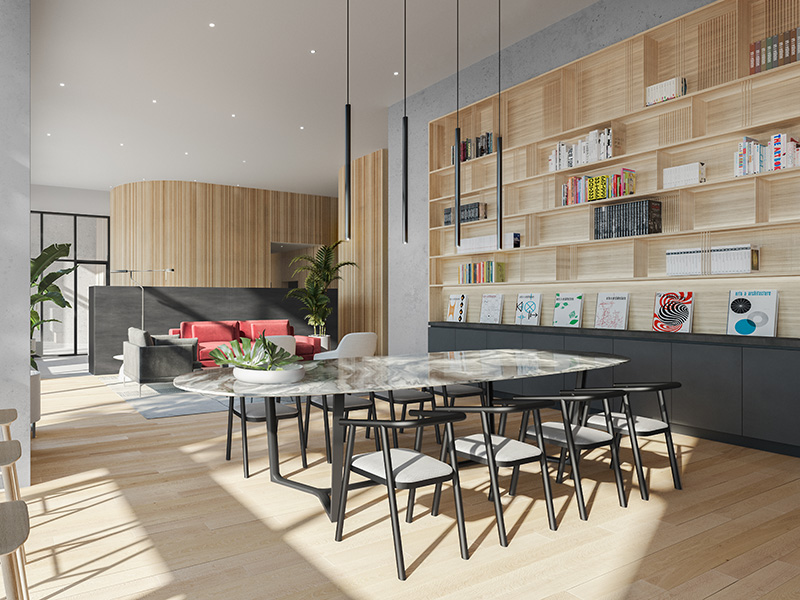 Bennett Lo, Founder of Dialogue 38, says his approach was to focus on delivering design that would last. “We’re all influenced by trends and lifestyle, but our designs need to stand up against time. How do you produce something that is going to have immediate appeal and provide its own kind of interest, without feeling dated in a few years? The idea was to strip the design back and focus on the essentials, while at the same time incorporating aspects of the area. The suites and common areas will have smooth concrete ceilings and warm touches of wood throughout — and the lines are clean and open.”

The nine-storey building will also feature an expansive lobby that doubles as a co-working space, as well as a gym that draws on the warm materials of the suites and common areas. Lo says the design of the amenity space is optimized to encourage active use. “We focused on the amenities that we know people use, and spent our energy crafting spaces that embody the spirit of the building. The benefit of a boutique mid-rise is the opportunity to extend your living space in to the amenity spaces, and provide moments of social engagement in the building.”