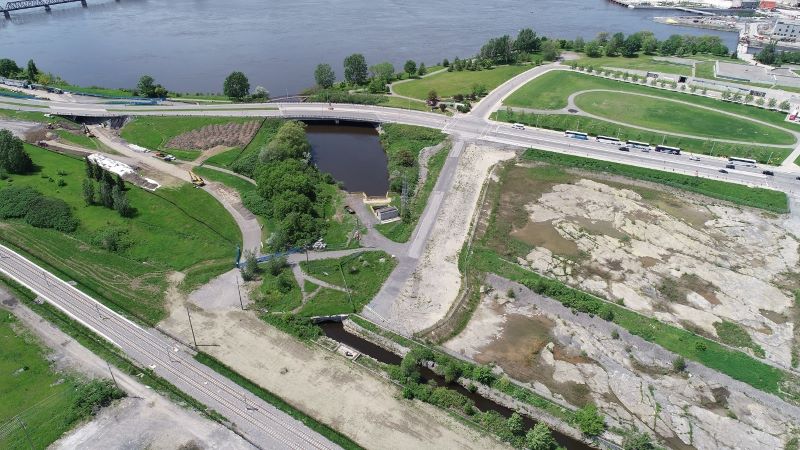 The NCC has set aside two sites within the 29-hectare LeBreton Flats Master Concept Plan, which include a 2.5-hectare (six-acre) parcel of downtown land located along an arterial road and 5-minutes’ walking distance from two O-Train LRT stations, and a nearby half-hectare (one-acre) site that hugs an inlet of the Ottawa River.

The major attractions are expected to be a regional and international draw for sports, entertainment, cultural and/or recreational purposes. These sites will become anchors for the surrounding development, which is planned as one of the most sustainable and inclusive communities in Canada.

The Master Concept Plan for LeBreton Flats was approved by the NCC’s Board of Directors in April 2021. LeBreton Flats will contain four districts: the Aqueduct District, a cultural hub spilling out onto public space; the Flats district, a  predominantly residential community defined by pedestrian-oriented streets; the Albert District, a mixed-use neighbourhood anchored by the future Ottawa Public Library and Library and Archives Canada joint facility to the east and a potential event centre to the west; and the Parks District, a series of park spaces combining the community’s industrial heritage.

“This is a once-in-a-generation opportunity. We are looking for visionaries and trailblazers who share our passion and excitement for the possibilities of this incredible place. We want to draw ideas for attractions that are both bold and transformational. LeBreton Flats has an exciting vision in place, and is poised to come alive again. It is time to breathe excitement and innovation into this spectacular site,” says Tobi Nussbaum, Chief Executive Officer, National Capital Commission.

Development is already under way to transform LeBreton Flats into a neighbourhood that will become home to 7,500 residents and 4,000 workers.

Interested proponents are invited to read the REI, and send in submissions by February 28, 2022.

Bank of Canada keeps key interest rate target on hold at 0.25 per cent