A team of Italian and Dutch professionals announced at the opening of the Architecture Exhibition of La Biennale di Venezia the need to define new possible paths for architecture and its social role. Many professionals are joining the cause, revealing a changing direction in the use of time in architectural design.

Time for Impact, curated by Gianpiero Venturini together with Marthijn Pool and in collaboration with AiD, is one of the seven projects financed by the Embassy of the Kingdom of the Netherlands in Rome after a call, titled “Sfide delle Città,” was launched last year. Its objectives were announced during the vernissage of the biennale in an open discussion at the Serra dei Giardini.

The project is straightforward in its structure: on one side, professionals pledge their time; on the other side, design missions are collected. But it represents a great challenge in itself because it aims at reallocating design resources. In tune with the grassroots approach of Alejandro Aravena’s just inaugurated Architecture Biennale, titled “Reporting From the Front,” Time for Impact founds its strength on the extended network of relations it is building among the younger and more independent designers. Building networks is also at the basis of New Generations’ approach that explores professional models that may counterbalance the big names of world architecture.

“Why does the architecture industry invest huge amounts of creativity and time in design competitions, knowing that only few contributors will be rewarded for their effort? What kind of impact could this industry have if only a fraction of this time was collectively spent on urgent global issues? Is it possible to increase the social relevance of architecture by collectively re-thinking the way architects spend their time?”

These were some of the questions at the centre of the debate. The following professionals participated, with Marco Brizzi (founder and director at Image and The Architecture Player) as moderator:

Time for Impact is an online platform that works as an Architectural Time Bank and Kickstarting Tool, promoting urgent challenges in the built environment that are in need of design expertise, spatial know-how and budget. Creative people from all over the world are invited to pledge their time and know-how to collectively boost socially relevant projects.

Twenty-four designers have already pledged to collectively boost socially relevant projects, and more are expected to join the pool of spatial experts. Nine challenges (i.e. urgent questions in need of design expertise, spatial know-how and a smart budget) have been proposed so far.

The objective for the organizers is to reach 5.000+ supporters in the next 4 months. Participation in terms of time pledging will be open on the Time for Impact website until November 27, 2016, when the collaborative platform will be launched in a public meeting at the Biennale in Venice and the selected challenges will be announced. 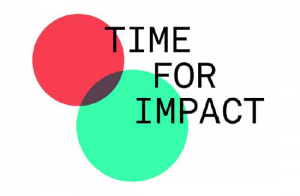