”Oh my god, here we go again,” said Tsur Somerville, a professor at the Sauder School of Business at the University of British Columbia, when he heard Scheer’s announcement Monday.

Scheer plans to loosen rules around the stress test, which was designed to ensure buyers requiring mortgages could afford payments if interest rates rose, and remove it altogether for mortgage renewals.

With a longer amortization, first-time homebuyers can opt for a larger mortgage than they might be able to afford payments on if it were for a shorter time frame. Meanwhile, lenders may be able to approve borrowers for larger mortgages if the stress test requirements are loosened.

The stress test – originally introduced in 2010 and significantly modified in 2018 – has helped to slow accelerating house prices, according to various reports.

The Canada Mortgage and Housing Corp. CEO Evan Siddall defended both measures amid industry lobbying for changes earlier this summer. In a strongly worded letter to the Standing Committee of Finance Siddall said his job is to ”protect our economy from potentially tragic consequences.”

The stress test has helped reduce house prices in Canada by 3.4 per cent compared to what they otherwise would have been, he said. The CMHC declined to comment Monday, saying they were not in a position to comment on political parties’ promises or announcements during the election period.

A TD report released earlier this year estimated home prices could rise six per cent by the end of next year if the stress test was removed and all else remained equal.

The stress test ensures borrowers can afford their mortgages if rates increase. Prudent not only for individuals, but key part of ensuring a stable banking system (that’s why this is through the OSFI — the banking regulator!). But, there’s tradeoffs. #cdnpoli https://t.co/SNosdgo8re

”Realtors have long asked for common-sense solutions designed to help Canadians purchase a home of their own,” said Jason Stephen, The Canadian Real Estate Association’s president, adding Scheer’s campaign promises include some of their suggested policy changes.

Under Justin Trudeau, too many hardworking Canadians have been priced out of the housing market. I will fix Trudeau’s mortgage stress test & bring in 30-year amortization periods for first-time homebuyers to lower monthly mortgage payments. Because it’s time for you to get ahead! pic.twitter.com/oWcGJfR4oi

The supply issue is one the two professors were in favour of addressing, as increased supply tends to better affordability.

Canadians’ high level of household debt has been a concern. The CMHC previously warned that high debt levels with looming interest rate hikes could lead to lower consumption, less savings or loan defaults.

Canadians owed roughly $1.77 in credit market debt – a figure that includes consumer credit, mortgages and non-mortgage loans – for every dollar of their disposable income, according to Statistic Canada’s most recent figures.

”If we’re concerned about Canadians’ level of debt, why are we helping them take on more debt?” asked Somerville.

Nothing like some demand stimulus to take Toronto’s already supply constrained housing market back to bubble territory. This is bad policy because it’s going to drive house prices even higher which actually makes homes less affordable – but it does allow you to pile on more debt! https://t.co/8j04hHlxwv

To call these strategies a pure win for first-time buyers, would ignore the feedback into housing prices, said Thomas Davidoff, a professor at UBC’s Sauder School of Business.

”In certain markets, ignoring that – I think – is a mistake.”

Davidoff also believes another issue is how much risk taxpayers should put themselves in.

The Liberal party’s plan, by contrast, provides less risk for taxpayers, he said.

Liberal leader Justin Trudeau announced earlier this month his party would expand a recently launched program aimed at helping first-time home buyers lower their monthly payments through a shared-equity mortgage with CMHC. The expansion would boost the maximum qualifying price of a home in Victoria, Vancouver and the Toronto region from about $500,000 to nearly $800,000.

”There’s an element of subsidy there,” Davidoff said, adding that means taxpayers are not getting a great financial deal. But, the risk is lower because a borrower can’t default on equity if interest rates rise or they lose their income, like they can on the payments for their mortgage.

It was a pleasure to have Canada’s next Prime Minister, the Honorable Andrew Scheer in Vaughan today to unveil his 4-point plan to make buying and owning a home more affordable for you. #VoteRoberts #AnnaRoberts #CPC

Andrew Pavlov, a professor at Simon Fraser University’s Beedie School of Business, supported the implementation of the stress test and scaling back mortgage amortization terms when both changes happened.

”Today the situation is very different,” he said.

In flat or declining housing markets, which many Canadian cities have become thanks partly to a host of government intervention measures, there’s a case for relaxing mortgage borrowing rules, he said.

If house prices decline substantially, defaults will start to occur and put the financial system at risk, Pavlov said.

This report by The Canadian Press was first published Sept. 23, 2019. 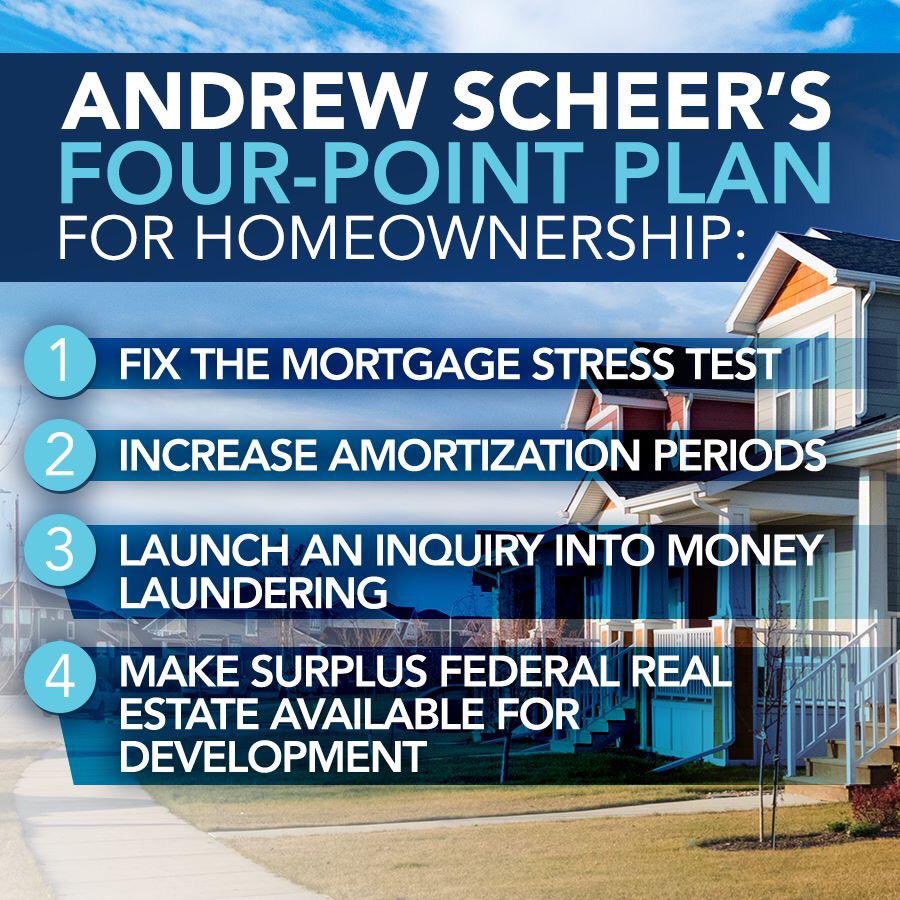 WeWork CEO stepping aside amid questions about company