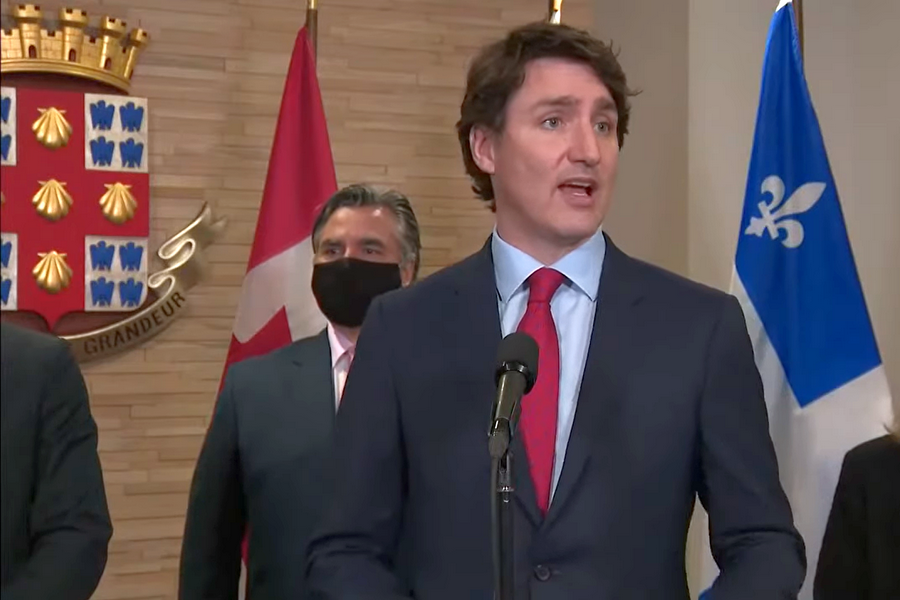 Earlier in the day, the Bank of Canada raised its key interest rate by half a percentage point to one per cent – its highest rate hike in more than 20 years – which is expected to affect the cost of bank loans, including variable-rate mortgages.

“In the budget we put forward a plan to address the housing crisis that too many families are living through,” Trudeau told reporters in a suburb north of Montreal, responding to a question about the interest rake hike.

Other than the tax-free savings account, he said the budget for the 2022-23 fiscal year includes measures to double housing construction starts across the country and to “crack down” on speculation, including by limiting market access of foreign buyers.

“We know that there isn’t any one thing any government can do,” he said about the high cost of living in Canada. “Every family is a different situation, and the approach we take has to be multi-faceted.”

The prime minister also responded to accusations by federal Tory leadership candidate Pierre Poilievre, who has said municipalities across Canada are helping to keep housing prices high by causing construction delays and adding costs. Poilievre wants the federal government to pressure cities to reduce bureaucracy and lower the costs involved in building homes.

Trudeau said his government is investing billions of dollars and partnering with cities to accelerate housing starts, “instead of talking about it, as some Conservatives are doing.”

“It’s good to see other parties agreeing with us that that’s the best path forward,” he added.

🧵 We are facing a housing crisis in Canada. We need URGENT action to fix this mess. It’s time for big cities to say YES in my backyard to more housing. Here’s what we’ll do together: #YIMBY pic.twitter.com/vbEtL94AYk

New from me at TVO, on why conservatives are coalescing around YIMBY-ism (broadly defined) as an answer to the housing crisis, and why progressives aren’t even on the playing field yet. https://t.co/S3R6lG2LSD

#vanre #cdnpoli #vanpoli @CBCLarsen @PierrePoilievre “Vancouver’s Renfrew-Collingwood neighbourhood,,,a run-down 1930s house that’s for sale for $4.888 million. ‘Why is it that Vancouver has the third most unaffordable housing market on the planet?'” https://t.co/xEAhEENS02

All the praise heaped on Poilievre’s video obfuscates the extent to which his ideas about how to deal with the housing crisis are appalling, dangerous bullshit. https://t.co/HY0FBY45Sj

He doesn’t seem to understand zoning, as Brian points out. Which just means he’s dangerous and won’t move the needle. https://t.co/RnzxnXrJDH

It’s not a good thing if a pretty awful Federal leadership candidate like #Poilievre is allowed to seize the issue of housing supply & home prices, even if he’s got details & jurisdictions wrong.

Take the issue away from him.

EVERY candidate should want a lot more homes built.

I don’t comment much on politics but I think Poilievre’s clear popularity particularly among young voter, is an issue for Trudeau and potentially a big deal for housing. His housing/inflation focus is resonating. Will force more action on the housing front by the libs https://t.co/A8ltADurUh

Poilievre is tapping into housing frustrations better than any other federal politician, and eating the Liberals’ lunch. If you look past the “printing money” distraction here, he’s channelling unacknowledged angst really effectively https://t.co/Tb2D01ZGWQ

For months, Pierre Poilievre has supported protesters who threatened to overthrow a democratically elected gov. Now he’s attacking the legitimacy of the Bank of Canada. He is stoking the flames of populism. We cannot take this lightly. #cdnpoli
https://t.co/UKULsWNBiV