According to a new market study by Newmark Knight Frank Devencore (NKF Devencore), the vacancy rate for all office classes in downtown Toronto continues to remain very tight. The most substantial delivery of new space was the EY Tower at 100 Adelaide Street West, a 905,000-square-foot building that is almost fully occupied. The 800,000-square-foot One York Street was also recently delivered and is almost fully leased.

“While the next development cycle is currently underway, there is only a limited amount of new office space coming to the market over the next 2-3 years,” said Allan Schaffer, President/Broker of Record of NKF Devencore’s downtown Toronto office. “Pending the completion of major new projects in 2020-2021, vacancy rates will likely decline further as demand for top-tier space continues to be driven by tenants in the financial, legal, media and tech sectors.” 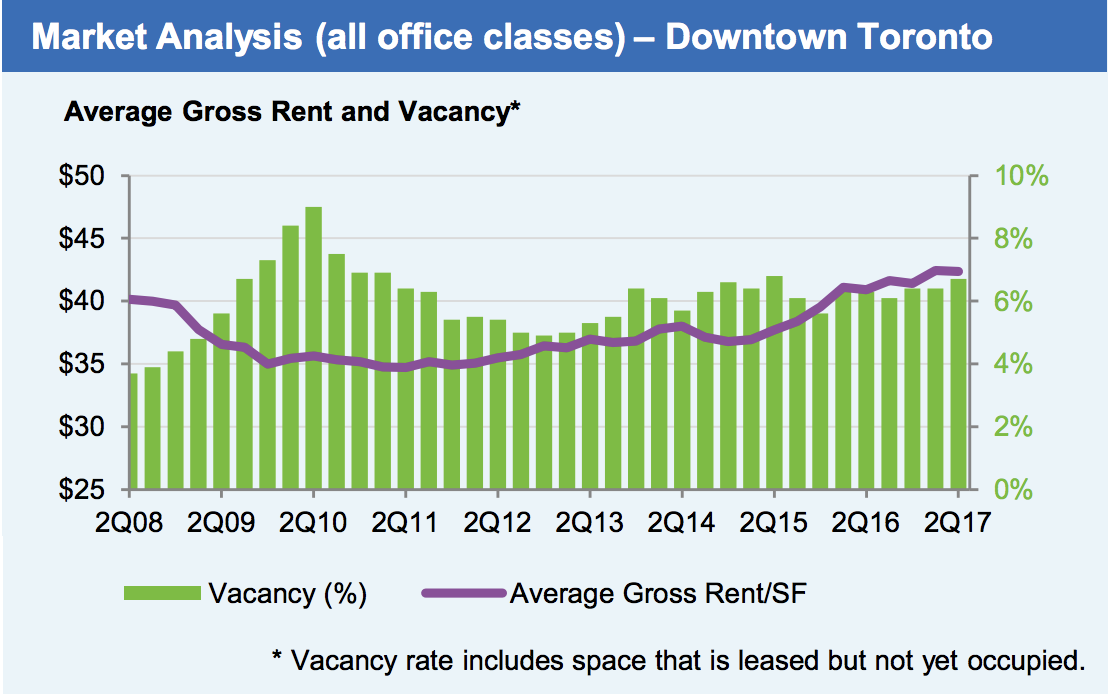 Mr. Schaffer also commented on evolving tenancy options in the downtown Toronto office market.”One of the more interesting trends to emerge of late is the coworking model of office space occupancy, which provides the option of leasing shared space and has the advantages of flexible lease terms, lower up-front costs, and the ability to move into fully built-out space,” Mr. Schaffer said. “Until recently, this coworking model has been marketed to individuals or very small firms. However, one of the largest providers of shared space, WeWork, is now offering these advantages to organizations with 500+ employees.

“The model may prove appealing to larger companies that need temporary, project-based space. On the other hand, short-term leases can prove costly, particularly if a company is forced to make multiple moves down the road. Further, the model may not work for businesses that require a degree of confidentiality, as shared common spaces are not conducive to privacy,” Mr. Schaffer said.

While the vacancy rate remains low, the NKF Devencore market report also noted that tenants with leases that expire over the next two years should start investigating their options as soon as possible. There may be space available in some older Class A buildings that are being vacated by tenants moving into the new towers but landlords in downtown Toronto will maintain strong negotiating leverage over the next few years.